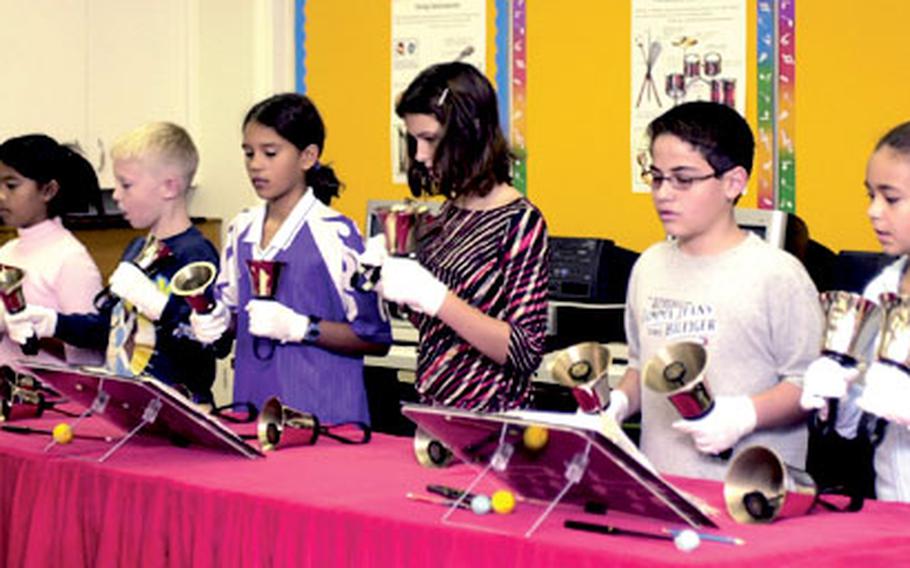 A traditional singing group will join the handbell choir for performances in the school cafeteria at 1:30 p.m., 2:15 p.m. and 6 p.m. The choirs will perform separate and joint performances during the 30-minute show, said Allison Peltz, music teacher.

The handbell choir is relatively new to the school, Peltz said; she started it five years ago when she took over the music program.

Kadena High School donated the bells to her school and the Parent-Teacher Association and Kadena Officers&#8217; Wives Club chipped in money to complete the set, Peltz said.

The choir consists of 11 ringers playing multiple bells. Ringers are in grades four through six.

While handbells bring thoughts of Christmas, Peltz said the group practices and performs year-round. Two performances are set for the spring.

&#8220;The group has done a complete metamorphosis,&#8221; she said. &#8220;They are playing some very difficult music. This is a wonderful opportunity for kids to take what they learn in music and take it to the highest level.&#8221;

For one student, playing handbells is not just educational, it&#8217;s also fun.

Fellow sixth-grader Jessica Teasdale &#8212; in her second year with the choir and playing the D and E bells &#8212; said she is using the experience to reach another goal.