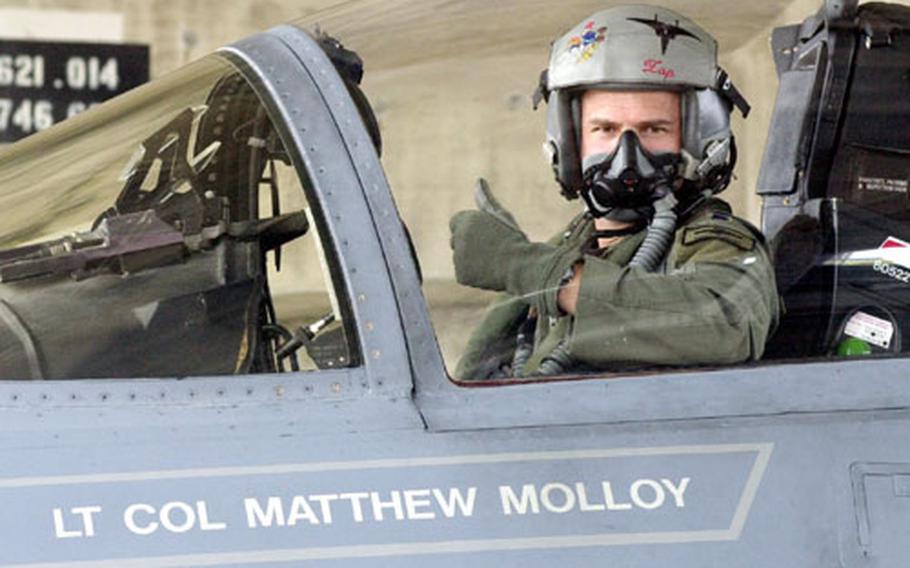 Air Force Lt. Col. Matthew Molloy, commander of the 67th Fighter Squadron gives a ‘thumbs up’ sign to his maintenance crew Thursday after returning to Kadena Air Base after his last flight with the squadron. Last week, the squadron, known as the “Fighting Cocks,” won Raytheon’s Hughes Achievement Award, given annually to the best air defense squadron in the U.S. Air Force. (Mark Rankin / S&S)

It began with his learning the squadron he&#8217;s led for two years, known as the &#8220;Fighting Cocks&#8221; had won Raytheon&#8217;s Hughes Achievement Award, given annually to the best U.S. Air Force air defense squadron.

And Thursday, he was greeted with a stream of water from a fire hose wielded by his daughters as he stepped down from the cockpit of his F-15C Eagle jet fighter for the last time.

The wash-down was followed by a champagne shower from his squadron&#8217;s members. Molloy leaves next week for a year at the National War College in Washington.

&#8220;Winning the Hughes Trophy is certainly a highlight of this tour,&#8221; Molloy said, standing dripping wet near the plane that soon will bear another commander&#8217;s name. &#8220;This is something earned by everyone scattered around the airplane today. To be named the best counter-air squadron in the Air Force, including the Air National Guard, is quite an achievement.&#8221;

He said the 67th is only the second fighter squadron to win the trophy four times since its 1953 inception. He said the squadron had tough competition.

The award was not the squadron&#8217;s top achievement, he said: &#8220;The real highlight was to bring everyone home safely after 718 combat missions and 4,000 combat hours as part of Operation Iraqi Freedom.

&#8220;The competition this year was keen as the 159th at Jacksonville, Fla.; and the 58th at Eglin AFB, Fla., were close contenders,&#8221; Jumper stated in a message. &#8220;Each nominated squadron demonstrated the best our Air Force has to offer, and I am proud of their accomplishments.

&#8220;However, the 67th clearly displayed its superior ability to mobilize, deploy, fly and dominate the sky anywhere in the world.&#8221;