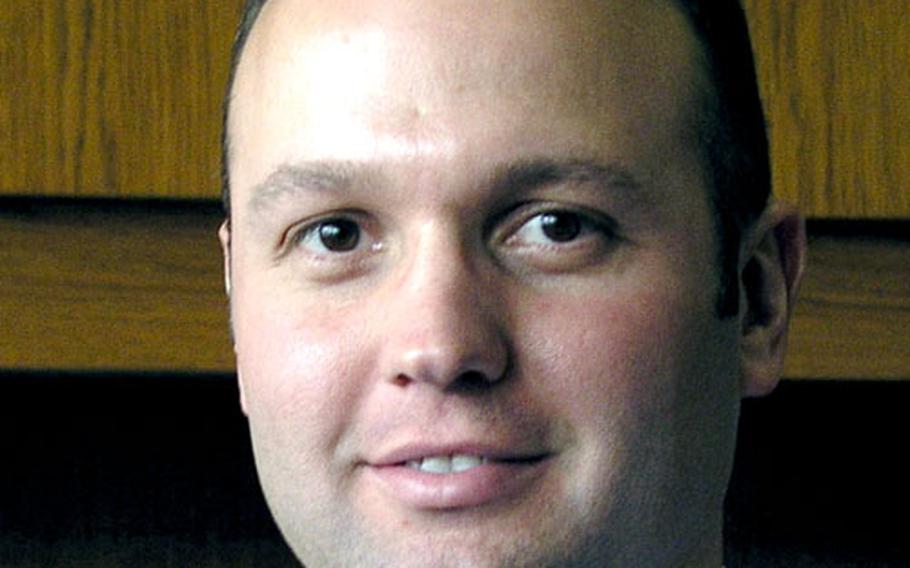 Tech. Sgt. Jason DeFelice, based in Okinawa, recruits students and other potential airmen from all over the Pacific theater. (Erik Slavin / S&S)

KADENA AIR BASE, Okinawa &#8212; Even as the Air Force seeks to discharge junior officers and others to reduce its overall force, Tech. Sgt. Jason DeFelice spreads his message across Okinawa and the Pacific theater: Airmen, we&#8217;re still hiring.

The Air Force still needs plenty of people to fill its junior enlisted ranks, said DeFelice, an Okinawa-based recruiter who arrived on island in July.

Since filling a recruiter slot that he said sat vacant for nearly a year, DeFelice has scoured Kadena High School for potential enlistees. But he hasn&#8217;t stopped there.

Despite the differences in military culture, DeFelice has found new airmen recruits among Marine families.

The closest Marine recruiter is based on Guam, a Marine spokesman said. High school students who think Marine life is for them get in touch with Guam and complete much of the process over the phone and through mail, the spokesman said.

If a Marine recruiter did operate on Okinawa, that Marine would likely find as accepting an environment as anywhere outside the United States. It&#8217;s a far cry from the workings as a Los Angeles area recruiter, where DeFelice faced his share of difficulties.

Despite such opinions, DeFelice says he has never felt the same pressures as some Army recruiters, whose alleged practices led to internal investigations and retraining. In one case, the Army suspended two recruiters in Colorado in April after they allegedly encouraged a student to create a fake diploma and lie about his drug history.

The Air Force doesn&#8217;t have to fill the huge quotas that Army recruiters do.

And the war on terrorism is on many students&#8217; minds when DeFelice talks to them.

DeFelice estimates that 20 percent of the students he talks to enlist because they want to go to Iraq or Afghanistan. They ask for jobs more likely to be deployed, including Special Forces, transportation or security forces specialties.

Kourtney Taylor, 18, surprised a lot of her friends, who she said considered her &#8220;too girly,&#8221; by asking for security forces training when she recently enlisted.

So would Jeffrey Morgan, 19, who just signed a six-year commitment. After spending one year in college, Morgan figured he might as well get paid and trained while taking college courses in the military.