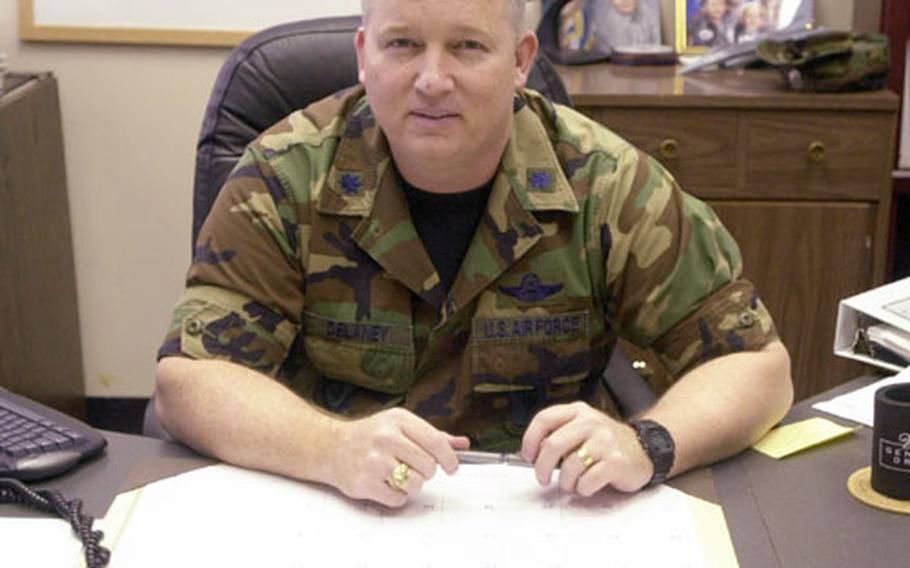 Delaney oversees the program and implements punishments for those who misbehave, whether it&#8217;s vandalism, substance abuse, underage drinking or drunk driving, just to name a few.

Even though Kadena community members may be punished in the Japanese legal system, they still face disciplinary action at the KDAP.

Delaney said that along with preserving good order and discipline on base, he is especially concerned with misconduct off base.

Most cases are decided within a month, and base privileges are suspended during that time, Delaney said.

Once an individual gets into a situation that could require a hearing, the individual&#8217;s sponsor and chain of command is notified. The hearings are attended by the suspect, his or her sponsor and the sponsor&#8217;s first sergeant or commander at the Kadena Law Center. The hearing officer then listens to all sides and makes a decision concerning the appropriate action. If punishment is meted out, the action is documented and kept as a permanent record throughout the sponsor&#8217;s tour.

Punishment can range from a letter of warning or community service to 24-hour parent supervision or expulsion from the base, Delaney said.

Each situation is different, he said.

While Delaney may be the &#8220;hammer,&#8221; Jane Ellis, the director of KDAP, could be called the &#8220;rehabilitator.&#8221; For example, when students are involved, she goes to the schools to get their grades and monitors their progress. She also helps set up counseling for those who need it.

The number of cases seen by the KDAP is increasing, Ellis said.

But it&#8217;s not because more people are misbehaving.

The KDAP staff is spreading the word by giving briefs for all newcomers and unit commanders.

In her role as &#8220;good cop,&#8221; Ellis said most of the kids who have hearings realize the seriousness of their actions by the official tone set in the courtroom.

Delaney said the key to staying off KDAP&#8217;s radar is simply doing the right thing.