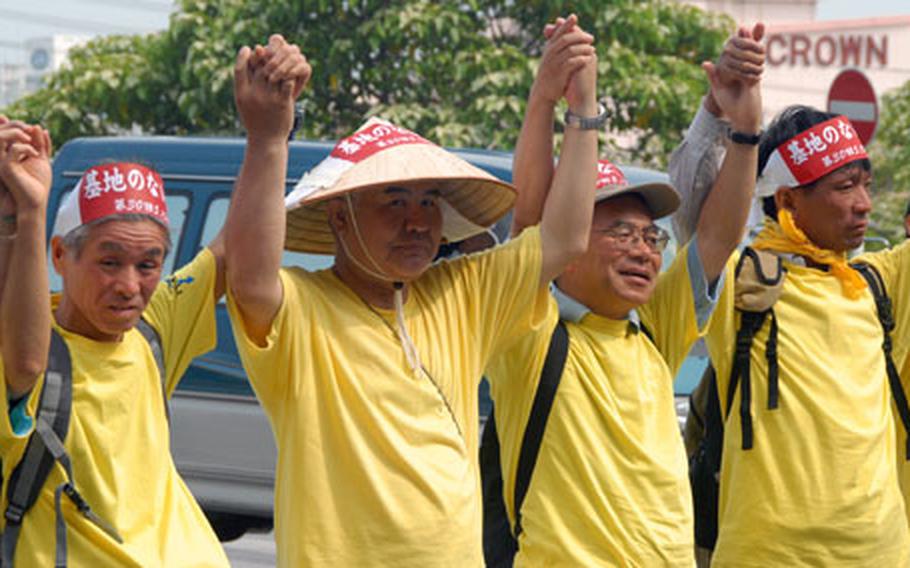 Protesters link hands outside of Kadena&#39;s Gate 2 Sunday, stopping traffic from entering or exiting the base. The protesters tried to form a human chain around the base three times Sunday, at 3:20, 3:45 and and 3:55 p.m., but each effort fell short. (Megan McCloskey / S&S)

Protesters link hands outside of Kadena&#39;s Gate 2 Sunday, stopping traffic from entering or exiting the base. The protesters tried to form a human chain around the base three times Sunday, at 3:20, 3:45 and and 3:55 p.m., but each effort fell short. (Megan McCloskey / S&S) 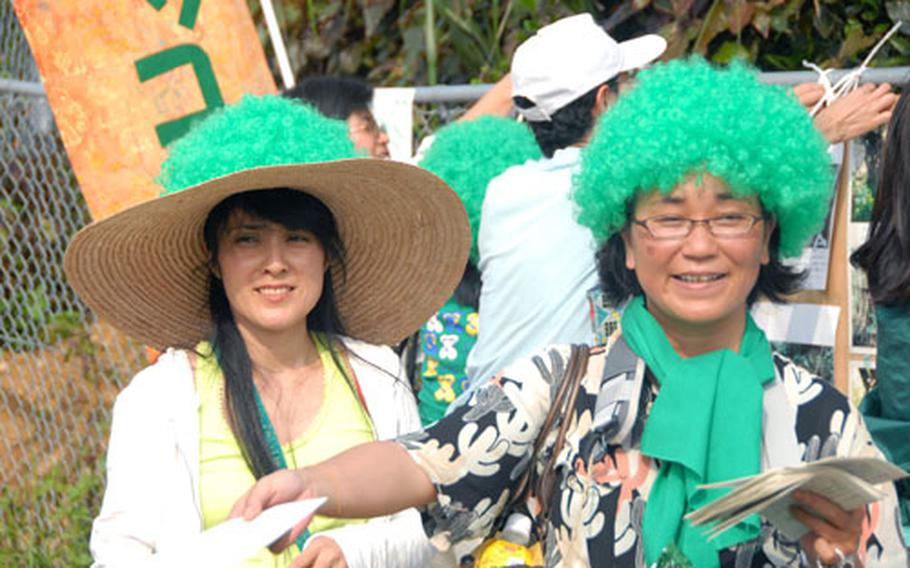 Members of Naha Broccoli hand out fliers Sunday at the "Hands Around Kadena" protest. The group is protesting plans for a new helicopter pad for environmental reasons, and encouraged people to wear green to the demonstration, which was to call for the U.S. military to remove its forces from Okinawa. (Megan McCloskey / S&S) 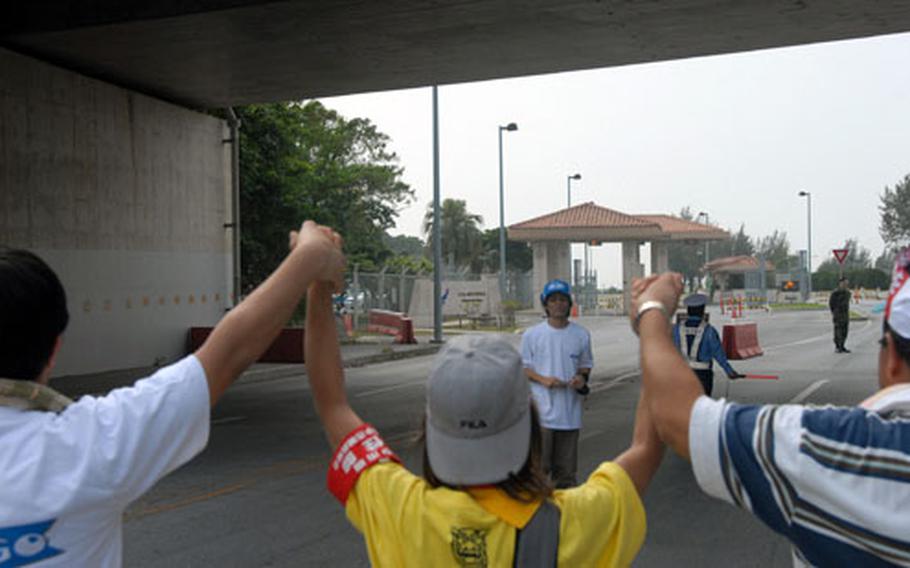 Thousands of people showed up for the hour-long gathering, but they failed to make a complete ring around the base. (Megan McCloskey / S&S) 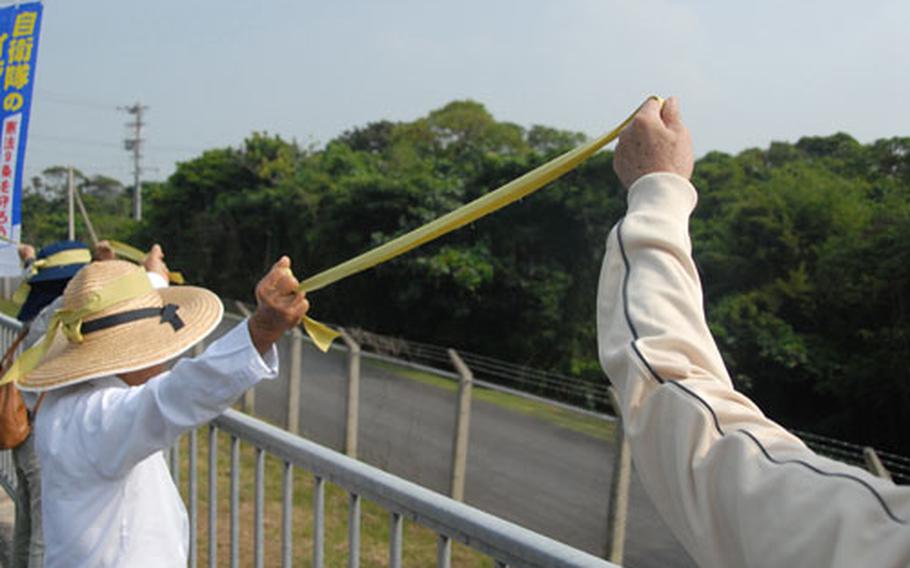 Protesters use yellow ribbons to extend their grasp as they attempt to form a ring around Kadena Air Base, Okinawa, Sunday afternoon. The effort ultimately failed, but protesters said they felt their point -- wanting the U.S. military off the island -- was made. (Megan McCloskey / S&S) 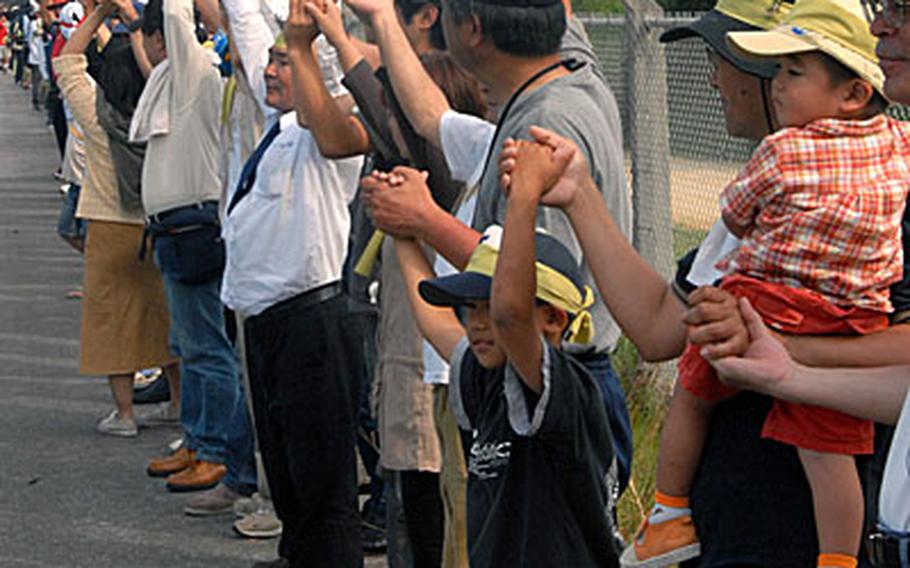 The 15,000-plus protesters who participated ultimately were not enough to encircle the base&#39;s 11-mile perimeter. (Megan McCloskey / S&S)

KADENA, Okinawa &#8212; A somber air dominated a tent set up near Kadena Air Base&#8217;s Gate 4 on Sunday. Organizers had hoped to encircle the air base with human chains, but the protest effort failed.

Okinawa Peace Activity Center, the event&#8217;s main organizer, said 15,270 people joined in the protest calling for the U.S. military to leave Okinawa, but they were not enough to join hands and completely encircle the 11-mile perimeter of the air base. Organizers said they had expected about 20,000 people to show up.

Along the fence line, there were long breaks in the chain. People of all ages linked together &#8212; some with shirts, poles, ribbons and even dogs between them &#8212; but gaps up to a quarter- mile long were seen, especially farther from the gates.

&#8220;It is extremely regrettable that we could not make a complete ring,&#8221; said Hiroji Yamashiro, director of Okinawa Peace Activity Center.

But most participants seemed content, leaving the scheduled one-hour demonstration in an orderly manner and putting away bullhorns, bottled water and snacks as they boarded tour buses and vans to head home.

Keiji Mishima, 51, from Naha, who joined in the demonstration with his wife, said he was not discouraged by a smaller turnout.

&#8220;I wish more people could show up today,&#8221; he said. &#8220;But, as ordinary citizens like us, this is the only way to support the effort to remove military bases from Okinawa. The trend in today&#8217;s Japan is moving more and more toward the right, and it is getting harder to call for removal of military bases.&#8221;

Okinawans&#8217; message, however, is very clear, said a 37-year-old woman from Urasoe who gave only her family name, Toyozato.

Some at the protest, however, were less passionate about the cause.

Arihiro Abe, originally from Tokyo and now a doctor in Naha city, said his boss made him and a few co-workers attend the protest.

When protesters linked arms in front of Gate 2, Abe, who studied for a year in Minneapolis, stayed off to the side.

He said the U.S. military presence on Okinawa is a complicated issue, and he hopes in the future Japan doesn&#8217;t need it.

During the protest, it was business as usual on Gate 2 Street in Okinawa city. A 70-year-old gift shop owner who refused to give his name said he was not interested in the activities.

Akihiko Yoshida, 25, agreed as he walked opposite the protesters moving toward Gate 2.

&#8220;I see encircling Kadena Air Base as a message to tell the military to leave,&#8221; he said. But, he added, the protesters failed to consider economic impacts of the military.

It was a normal day inside the gates

Although there was increased traffic in the afternoon, Sunday&#8217;s demonstration did not appear to disrupt life on Kadena Air Base, and most people there said they were going about their day as normal.

Many airmen asked about the protest by Stars and Stripes said they were warned by their commands that they would get in trouble for speaking with the media about it.

Over the weekend, a scrolling message played on AFN TV stations letting people know about the expected protest and saying &#8220;if the media approaches you, refer them to public affairs without comment.&#8221;

An e-mail sent to U.S. personnel Thursday advising them to expect delays and to &#8220;not agitate or interact with&#8221; the protesters also warned people not to speak to the media.

A Kadena spokeswoman said the demonstrators were exercising their democratic right to protest.