Kadena pilot’s gift of bone marrow a gift of life 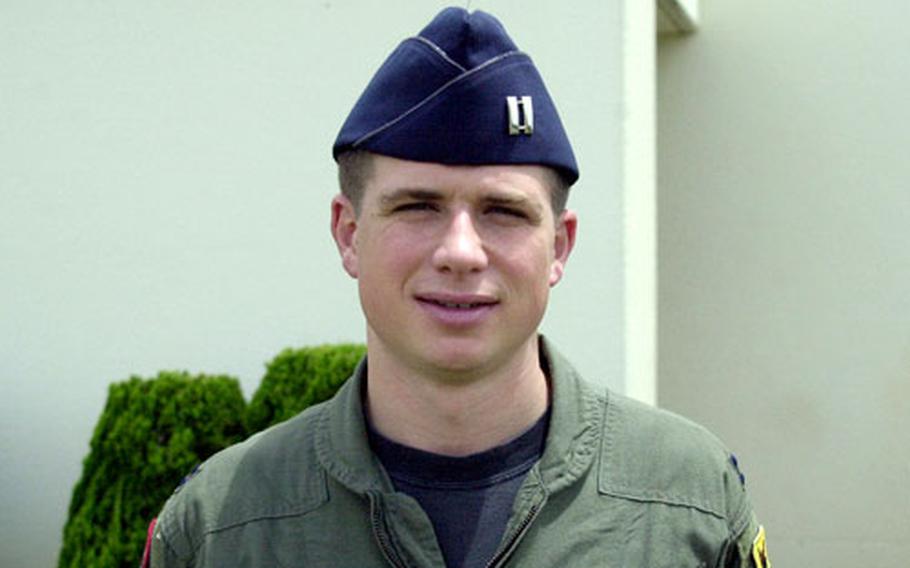 KADENA AIR BASE, Okinawa &#8212; The chances were one in 20,000 that Air Force Capt. Kevin Janasiewicz would be selected from the Department of Defense Bone Marrow Registry as a suitable donor.

Those odds are the same for most of some 635 servicemembers and SOFA personnel who signed up for the registry at bases on Okinawa during the past month.

Most registrants won&#8217;t think much about it ever again, just as Janasiewicz pushed it to the back of his mind. He volunteered a small vial of blood as an Air Force Academy cadet in 1996.

The registry found an ill 61-year-old man with genetics and blood qualities remarkably similar to Janasiewicz&#8217;s.

Janasiewicz consented to additional tests to determine if the mix of proteins and compounds in his blood matched the recipient.

However, illnesses and chromosomal variation mean that many patients must look elsewhere.

With so many possible reasons not to be chosen, Janasiewicz wouldn&#8217;t have been surprised not to hear back from the registry.

Two months after his blood tests, he received the news: he would be flying with his wife and child to Georgetown University Medical Center in Washington to help save a life.

Janasiewicz had to choose from two methods.

The older one requires doctors to extract the marrow from the hip, a surgical process that can require significant recovery time.

Janasiewicz chose the newer method, which required a daily shot for five days to stimulate production of his stem cells. On the fifth day he would spend about half of the day at the hospital.

Staff inserted intravenous needles into both of Janasiewicz&#8217;s arms, filtering stem cells out of his blood through a machine, then returning the blood to his body through the other arm.

The process took three to four hours. &#8220;I was feeling pretty much 100 percent within a few days,&#8221; said Janasiewicz, whom a flight surgeon quickly cleared to resume flying when he returned to Kadena.

Within about a week, Janasiewicz learned that the patient had received his donation.

Janasiewicz said he&#8217;ll wait out of respect for the patient&#8217;s wishes, adding that he also hopes others will take the time to help those in need.