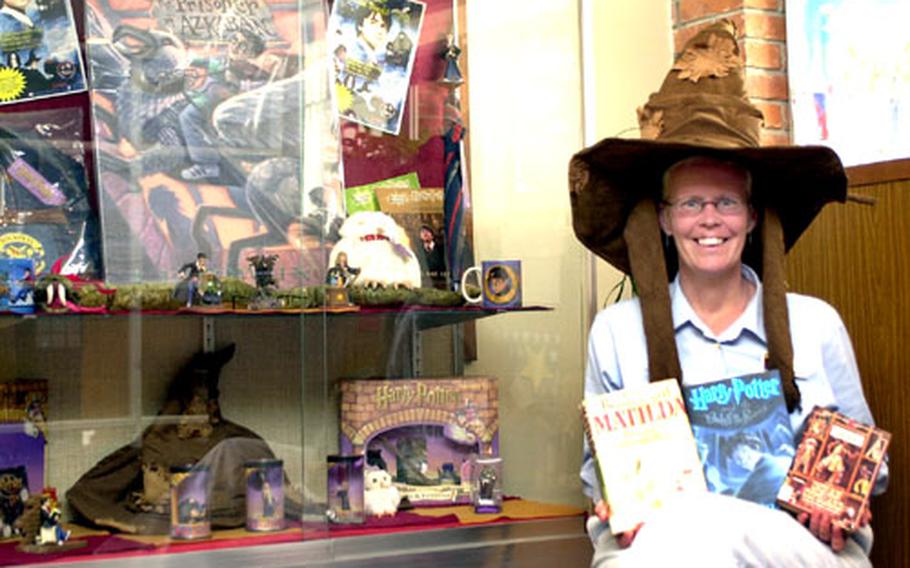 Cindy Tews, Kadena Base Library director, wears a Sorting Hat from the popular Harry Potter series and holds one of the books, along with several others on the 100 Most Frequently Challenged Books list. (Fred Zimmerman / S&S)

These are some reasons why certain books land on the 100 Most Frequently Challenged Books list put out by the American Library Association&#8217;s Office for Intellectual Freedom.

Each year, to promote the freedom of expression, the ALA sponsors Banned Books Week during the last week of September. This year&#8217;s theme is &#8220;Banned Books Week: Free People Read Freely.&#8221;

It takes place at the Kadena Base Library from Sept. 20-27. During that week, anyone who checks out a book on the banned list will be entered into a drawing for a &#8220;Banned Books Week&#8221; T-shirt.

The ALA and its co-sponsors have been holding the weeklong celebrations since 1982.

The week doesn&#8217;t promote just banned books but also those that have been challenged, said Cindy Tews, Kadena&#8217;s library director. Challenged books are those about which people have complained due to their content and are typically challenged in a local area rather than nationally, she said.

According to the ALA, the book was removed from one school system, banned in another and challenged in two more.

During Kadena&#8217;s celebration, Tews said, the library will print cards detailing the history of the challenges against each book, to be placed in the book pockets. All the challenged or banned books then will be put into a special display in the library.

Any patron who checks out a book from the area is offered an opportunity to register for the T-shirt drawing on Sept. 28. The library will give away four Banned Books Week shirts during the drawing.

The library opened registration for 100 children ages 7 to 14 and mailed each child a written invitation, which they must bring to enter the party.

Tews said when each child enters, their name will be announced and a Sorting Hat &#8212; a talking hat from the Harry Potter series &#8212; will tell them which group to join. There will be four activites though which the groups will rotate: a trivia quiz station, costume judging, readings from the series and a wizard-magic show.

The children also will be given a brief history of Banned Book Week so they understand the special party&#8217;s meaning.

At evening&#8217;s end, the top four contestants from the quiz station will square off to determine the ultimate Harry Potter trivia buff.

Prizes will be given to quiz finalists; door prizes will be awarded throughout the event. Tews said she wants as many kids to go home with prizes as possible. Harry Potter-themed giveaway items include a backpack, umbrella, Sorting Hat, wall clock, a spells and potions kit and figurines.

For more information on Banned Books Week or the Harry Potter Banned Books Bash, call the Kadena Base Library at 634-1502.

The Top 10 most frequently challenged books of 2002: