Kadena kids’ soccer tournament has a different set of goals 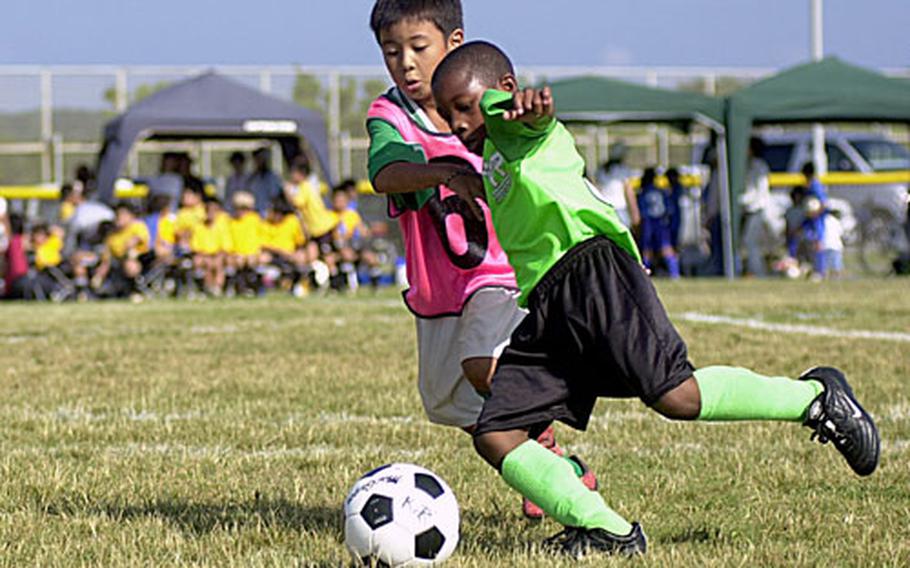 Cindy Fisher / S&S Santino Calloway, front, on the 7- to 8-year-olds Python team, and a Japanese child from the Immatowga Fires team race to the soccer ball during a match Saturday at the Friendship Soccer Tournament at the Chibana Recreation Area. About 580 American and Japanese children participated in the tournament. (Cindy Fisher / S&S)

KADENA AIR BASE, Okinawa &#8212; It was all about friendship for about 580 American and Japanese children at the Friendship Soccer Tournament at Chibana Recreation Area on Saturday, said organizers.

No one was keeping score &#8212; except for maybe a few children.

Other children remarked they didn&#8217;t care about winning or losing; they just had a good time.

After the 18 American teams and 22 Japanese teams, consisting of 7- to 8-year-olds or 9- to 10-years-olds, finished playing soccer, they ate at a barbecue sponsored by the United Service Organizations and presented each other with medals, said Air Force Master Sgt. Thomas Stiles, who coached one of the teams.

&#8220;This was a big collaborative effort,&#8221; Stiles said. The Kadena Youth Sports Program and the Okinawa English Teachers Association helped coordinate the event and get teams.

The event was about &#8220;trying to start a cultural exchange through sports,&#8221; the master sergeant said. It was an opportunity for the Japanese children to practice English and the American children to work on Japanese, he said.

Technical Sgt. Doney Snipe agreed it was a good chance for his 8-year-old daughter and the rest of the American kids to interact with Japanese children their own ages.