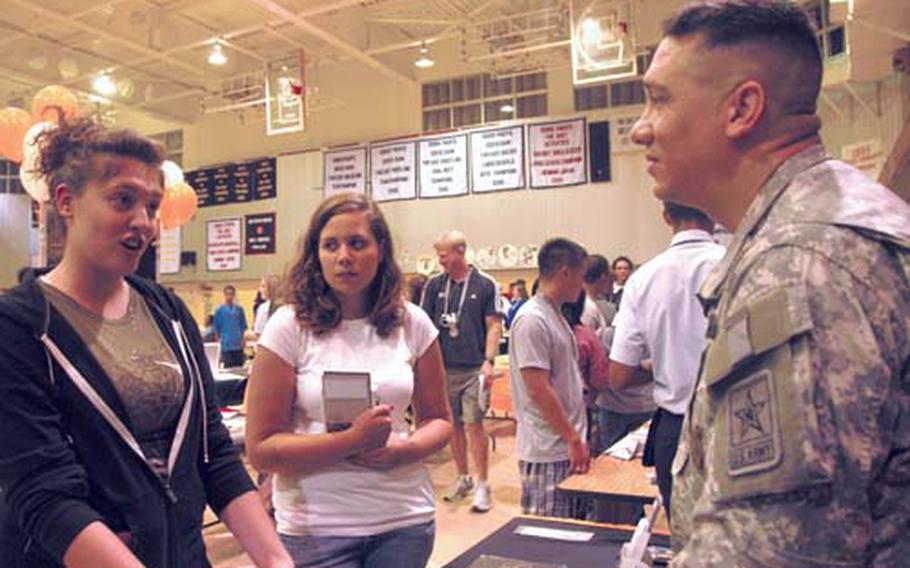 Jasmin Barton, 18, left, and Caitlin Arnot, 17, center, speak with the Sgt. 1st Class Javier Romero, the Army recruiter on Okinawa, about options in joining the service. Both are seniors at Kubasaki High School. Barton, whose father is in the Army, said she’s thinking about becoming an Army reservist to help defray college costs. Arnot said that since her family claims residency in Montana, in-state tuition costs are her determining factor for choosing a college. “I have only one option for college, and that’s Montana State University. It’s an education, and it’s what I can get,” she said. (Natasha Lee / S&S)

KADENA AIR BASE, Okinawa &#8212; The nation&#8217;s plummeting economy has some college applicants adjusting their plans for higher education.

However, the Army might not be her best option.

Inside Kadena High School&#8217;s gym, hundreds of students and parents approached tables with college displays and brochures to speak with alumni and watch laptops displaying PowerPoint presentations of campus life and dorm food.

Barton, a student at Kubasaki High School, plans to attend a two-year community college in Illinois before transferring to the University of Illinois at Urbana-Champaign to complete a bachelor&#8217;s degree in elementary education.

But she&#8217;s considering joining the Army Reserve to help pay for college, despite her parents&#8217; reluctance.

Romero, the Army recruiter on Okinawa, said students&#8217; interest for enlisting varies &#8212; although money is usually part of the equation.

"This is a community, just like in the States. Some use the military as an alternative if they cannot afford college," he said. "Maybe one in four, their interest is to serve our country."

The woes of paying for college typically weighs on the minds of parents and their children who are preparing to take the next step to achieve their dreams, said Kadena High School counselor, Maria Tejada, who helped organize the college fair.

The National Association for College Admission Counseling estimates the class of 2009 could be the largest in the nation&#8217;s history, with an expected 3.3 million graduates.

"Parents are always projecting," Tejada said, but this year, families with college-bound students may be feeling the squeeze even more.

The College Board, a nonprofit education association, recently reported a 6.4 percent increase in tuition at in-state public institutions and a 5.9 percent hike at private universities.

For Kadena High School senior Ron White, 17, attending Texas A&M was immediately out of his reach. He plans to take college classes on base, while working at the commissary to save money to eventually transfer to the four-year public university.

"I know it&#8217;s going to be hard for me to stay on my own in the States," he said. "This way I can stay at home and focus on my grades without the stresses of life."

David Young, a counselor at Kubasaki High School, said with the current financial crisis making it harder to secure loans and with the rising tuition costs, more students may enroll in two-year community colleges or less prominent universities as a more affordable option.

Young was manning a table for his alma mater Appalachian State University in North Carolina, he said.

With a price tag of $20,000 a year &#8212; including tuition, fees, room and board &#8212; the public university seems affordable compared to private universities like Duke University, which runs about $50,700 a year.

Thursday&#8217;s fair offered financial aid and scholarship workshops, and sessions on how to choose a college and apply to one.

"I&#8217;m going to whichever school gives me the most money," said Dylan Lonergan, 16, a senior at Kadena High School. "My parents said they would help, but I don&#8217;t want to put the burden on them."

His decision will be based heavily on how well he thinks he&#8217;ll be able to adjust to life in a new place.

Classmate Taneisha Broaddus, 17, a senior at Kadena High, said she&#8217;s not bothered by the hefty price tags at her top college choices but nervous about getting accepted.

Both colleges offer excellent medical programs in the gynecology field, but are highly competitive, she added.

Broaddus is hoping her 3.0 GPA and string of extracurricular activities secure her a spot.