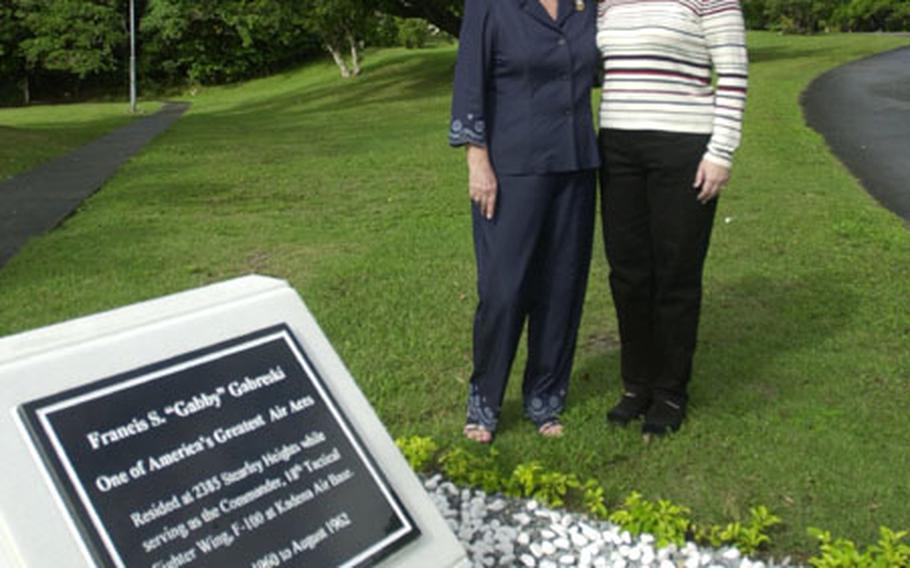 KADENA AIR BASE, Okinawa &#8212; A small monument honoring an Air Force legend was recently placed at his former residence here.

Gabreski was the top American ace in the European Theater in World War II, shooting down 28 enemy fighters in dogfights and taking out another three on the ground.

In July of 1944, Gabreski made a crash landing in enemy territory and eluded the Germans for five days. He was eventually captured and spent 10 months in a prisoner-of-war camp.

He separated from the service in 1946, but he was recalled to active duty in 1947. He went on to earn another six-and-a-half kills during the Korean War, earning him the distinction of being the eighth &#8220;Jet Ace&#8221; in history.

Goodman lived on Patterson Avenue from 1960-63 when her father, then Maj. John R. Stevenson, was assigned to 18th Tactical Wing flying the F-86.

Goodman said she never knew Gabreski was a war hero; her husband pointed it out when he heard her mention the name.

She simply remembers him as a nice man and a good person.

This is Goodman&#8217;s third time living on Okinawa, and every time she comes here, she makes a trip to her old stomping grounds.

During her latest move to Okinawa, she said she thought of erecting a monument. She noticed nothing recognized the hero that once called the house home, and she felt it was important to do something.

She brought the idea to then-18th Wing Vice Commander Col. Dave Razo, and the project took off. Housing Manager Lori Dallas helped bring the idea to the Pacific Air Forces.

After approval, Dallas said, coordinators went through several designs before selecting one.

The five-bedroom home is still in use today, although it is currently vacant, Dallas said. It&#8217;s reserved for field-grade officers with larger families.

Goodman hopes the next children who live there will have fond of memories of the neighborhood, too.