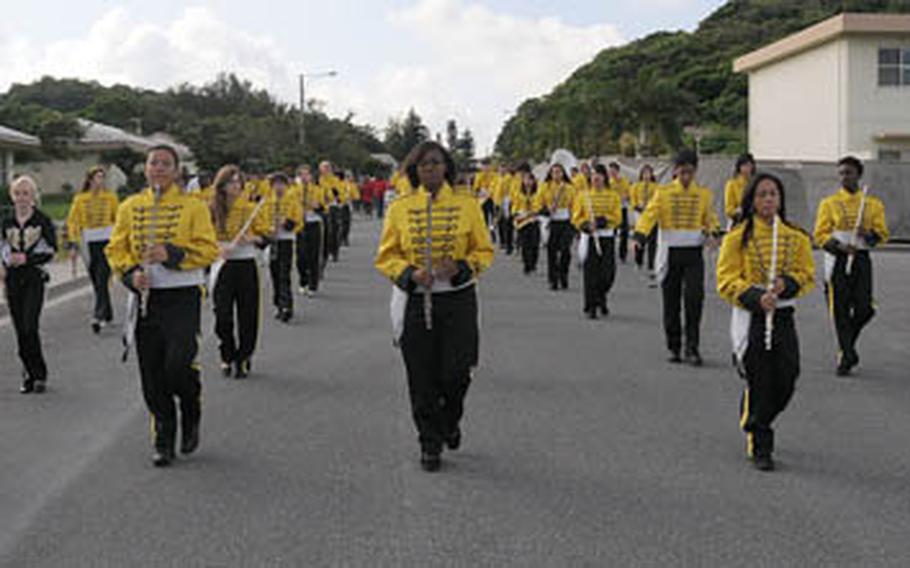 KADENA AIR BASE, Okinawa &#8212; Marching bands high-stepping to their music on the gridiron at high school football games might be common sights in the States, but at U.S. bases in the Asia-Pacific region, they&#8217;re few and far between.

Kadena High School band members, however, hope to kick up the pace.

This year, Kadena became the only Department of Defense Dependents School on Okinawa to field a marching band.

Music teacher Scott McGlynn was the motivational force. He taught for 14 years in Washington state before coming to Okinawa last year.

"In Washington state, if there is a school this big, then there would be a marching band," he said.

Since a marching band falls within standard band curriculum, McGlynn only needed approval from school administrators. The main obstacle, he said, was uniforms.

His first thought was white shirts and black pants, but "marching without uniforms isn&#8217;t the same thing," he said.

Then he stumbled upon a Web site that sells old school uniforms. There he found uniforms in the school&#8217;s yellow and black colors for $2,200, he said. And to make things better, the American Women&#8217;s Welfare Association gave the band a grant to buy them.

Uniforms can make them look like a marching band, but it was up to the Kadena student musicians to learn the marching part.

It was frustrating at first because only two students had prior marching experience but, McGlynn said, he saw steady progress as the band readied for its recent debut at the school&#8217;s homecoming game.

"The kids were worried that they would embarrass themselves," he said. "But when we started moving, the crowd just erupted."

But the band members said they were just appreciative of the opportunity.

Marching with instruments isn&#8217;t easy, however, as she learned during Kadena Elementary School&#8217;s mile-long parade to celebrate Red Ribbon Week.