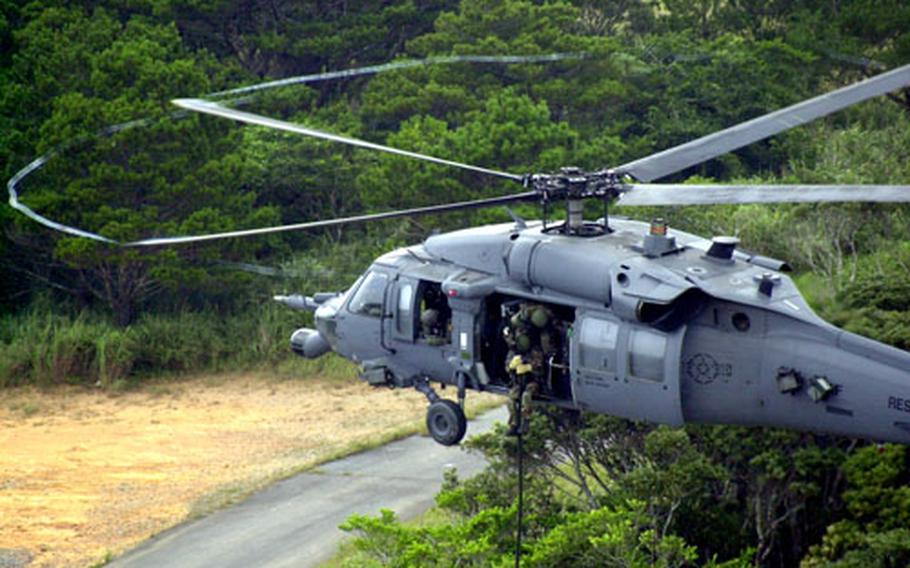 Members of the 33rd and 31st Rescue Squadrons, shown above during a recent exercise, rescued a 19-year-old American surfer Friday night after the youth had been swept to sea, victim of a rip tide in waters choppy from the nearby passing of Typhoon Matsa. (Erik Slavin / S&S)

The teen was reported missing at 7:15 p.m. while surfing at a local beach.

He was &#8220;a victim of a rip tide in choppy waters affected by the nearby passing of Typhoon Matsa,&#8221; Gonzalez stated in a news release. &#8220;But as the sky darkened, the Coast Guard was forced to call off its search due to low visibility, leaving the fate of the young man in the hands of six airmen from the 33rd and 31st Rescue Squadrons.&#8221;

An Okinawa police spokesman said the surfer, whose name was not released because he is considered a juvenile under Japanese law, was off Kanesku Beach Park, near Kadena Marina.

A man on shore spotted two surfers having difficulty. One 16-year-old, also an American dependent, managed to swim to shore but the other was swept to sea, the police spokesman said.

But a night search &#8220;is one of our specialties in the combat rescue business,&#8221; Lt. Col. Gary Henderson, 33rd Rescue Squadron commander, stated in the release. &#8220;We have additional equipment and do a lot of training at night and have that kind of capability.&#8221;

Approval for the search mission came at 10 p.m. and the helicopter was on its way within a half hour for what turned out to be a quick mission.

&#8220;Our aerial gunner, Senior Airman Matt Morrow, a surfer, suggested we search an area near Torii Beach where there are fishing nets anchored off the coast,&#8221; said Lt. Col. Vic Dallin, mission pilot and squadron operations director. &#8220;That&#8217;s where we spotted his surfboard first and then we saw him hanging onto the nets.&#8221;

The helicopter made several passes over the surfer, dropping chemical light sticks into the water to mark the area. On the final pass it hovered to allow two pararescuers to jump out.

The surfer had been in the ocean for more than four hours. He was taken to the U.S. Naval Hospital on Camp Lester for observation.

&#8220;This was a great ending to what might have otherwise been another senseless tragedy.&#8221;