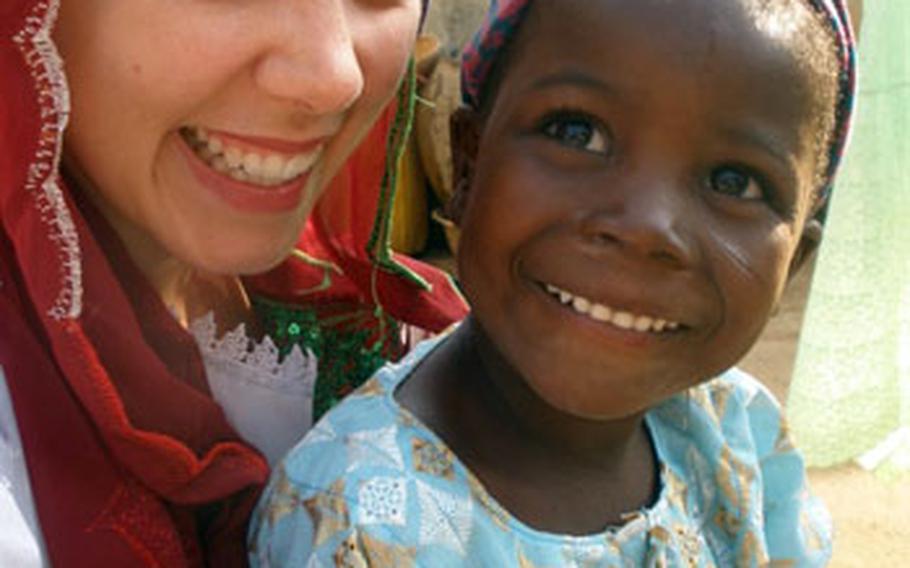 Peace Corps volunteer Catherine "Kate" Puzey, 24, pictured here in the village of Tabaski, Benin, in December, was killed last week outside her home. She was the first Peace Corps volunteer killed in that West African country since the Peace Corps program started there in 1968. Puzey was a graduate of Kadena High School on Okinawa. (/Courtesy of http://picasaweb.google.com/catherine.puzey)

Catherine "Kate" Puzey, 24, a Peace Corps volunteer, was found dead March 12 outside her home in the village of Badjoude, where she taught English.

The Peace Corps and the U.S. State Department have released no further details of her death. However, the Atlanta Journal-Constitution quoted her father, Harry Puzey, a former Department of Defense Dependents Schools teacher, as saying a suspect has been identified.

"We don&#8217;t think her death was political or random, but an individual act by one person," he told the paper.

Kate Puzey was born in Germany, where both her parents were DODDS teachers. The family moved to Okinawa when she was 7 and she graduated in 2002 from Kadena High School with top honors. She was president of the student council during her junior and senior years and was the salutatorian of her graduating class.

She graduated from the College of William and Mary in 2006 and joined the Peace Corps in July 2007.

"She was always smiling and helping other people," said Kadena High English teacher Margie Brogle, a friend of the Puzey family for 13 years.

"She was a ray of sunshine &#8212; a bright, quick-minded young lady who was always for the underdog."

Jody K. Olsen, acting director of the Peace Corps, released a statement calling Puzey "an exemplary member" of the organization whose work "contributed greatly to the lives of the Beninese citizens."

"Kate&#8217;s life and work spoke volumes about the kind of dedication she had to her service as a volunteer, and the U.S. Peace Corps is greatly saddened by her loss," Olsen said.

The Peace Corps has had more than 1,630 volunteers serve in Benin since the program was established there in 1968. Puzey&#8217;s death was the first homicide of a volunteer in that country.

Kate Puzey wrote about her experiences in Africa on her blog at: http://beinginbenin.blogspot.com

She also kept a picture Web page at: http://picasaweb.google.com/catherine.puzey