Kadena Chili's a hit before it opens 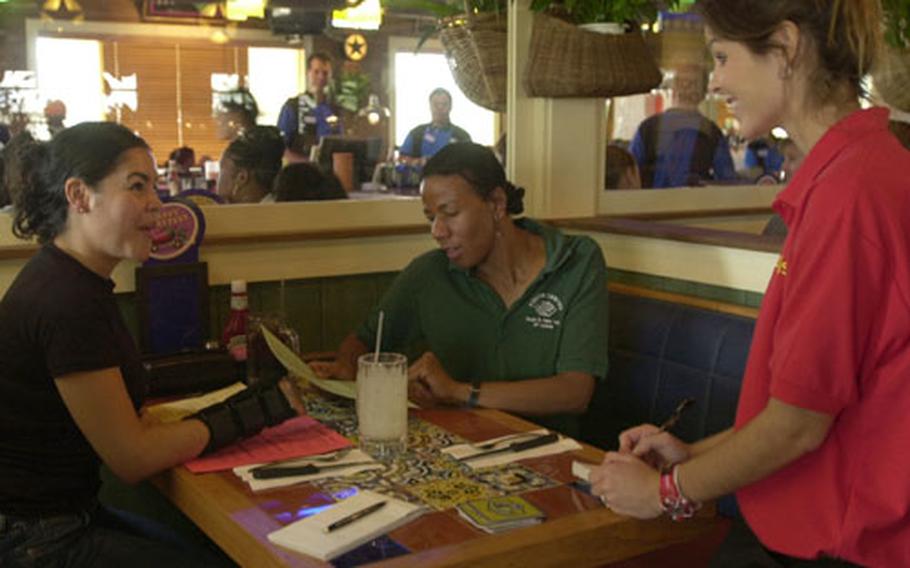 Air Force Staff Sgt. Evelyn Sosatoledo, left, can hardly contain her excitement as she orders her favorite, baby back ribs, from server Adrienne McClay at the new Chili&#39;s on Kadena Air Base. Tech. Sgt. Juanita Brooks, center, received a ticket getting herself and Sosatoledo into the restaraunt for the free tasting Friday. (Fred Zimmerman / S&S)

Preparations for the restaurant began in 1997 when Air Force Services Headquarters signed a deal with Brinker International, the parent company of Chili&#8217;s.

The restaurant&#8217;s signature items include baby back ribs, fajitas, steaks and buffalo wings.

Between 80 and 90 people a day have visited the restaurant in recent weeks hoping it was open, Herzog said. Seating capacity is 225.

Air Force Staff Sgt. Evelyn Sosatoledo &#8212; one of 2,500 guests who received a free preview meal from the restaurant Wednesday through Saturday &#8212; is counting the days until it opens.

He expects it to be 20 percent of the overall business, double that of other Chili&#8217;s take-out totals.

Restaurant hours will be 11 a.m. to 11 p.m. Sunday through Thursday, and 11 a.m. to midnight Friday and Saturday.