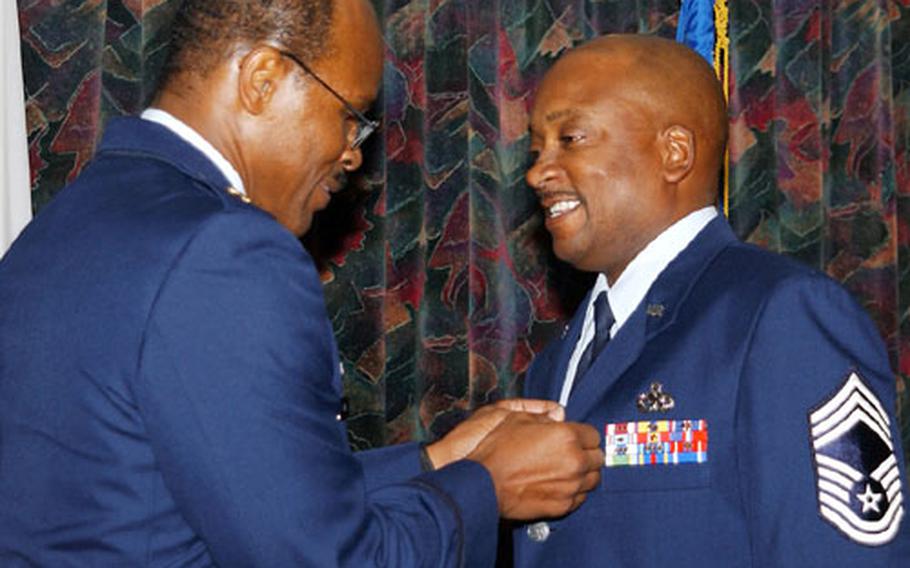 KADENA AIR BASE, Okinawa &#8212; A 20-year Air Force veteran was presented the Bronze Star during a commander&#8217;s call here Thursday.

Chief Master Sgt. Terrence Frost, superintendent of the 18th Component Maintenance Squadron, was recognized for his work setting up an airlift hub at a classified location during Operation Enduring Freedom. Frost deployed for 23 days from Travis Air Force Base, Calif., shortly after the Sept. 11, 2001, terror attacks in the United States.

Frost deployed as the senior noncommissioned officer in charge of the 615th Air Mobility Operations Group tanker airlift control element from Oct. 4 to Dec. 19, 2001. While in a position of authority at the airfield, he ensured safe support activities as more than 31.5 million pounds of cargo, and 5,000 passengers moved with a 99.4 percent reliability rate.

He also acted as the deployed first sergeant, leading the junior troops.

He said he kept the troops motivated by not complaining about the torrential rains and tough conditions.

Frost said he had mixed emotions when he learned he was receiving the medal.