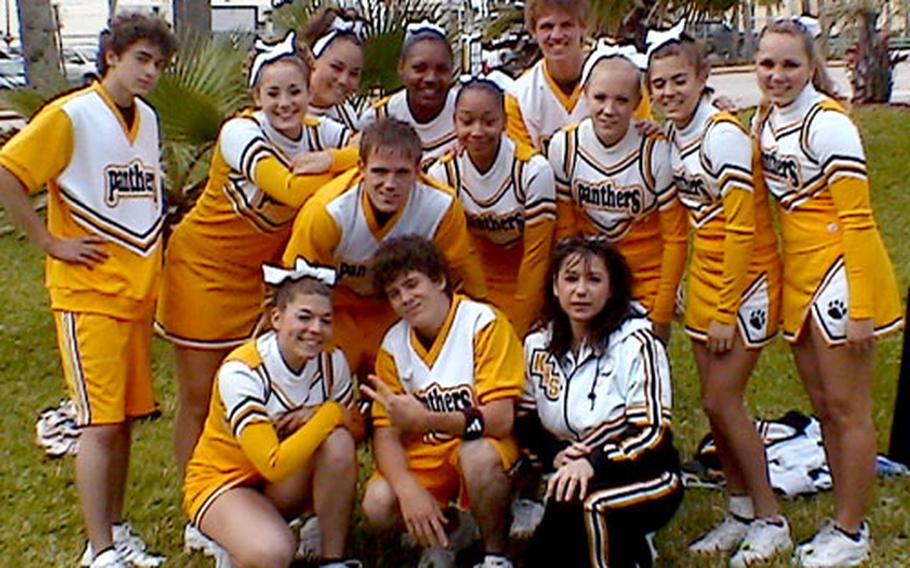 CAMP FOSTER, Okinawa &#8212; Going into the National Cheerleaders Association U.S. Championships in Daytona Beach, Fla., it might have seemed the odds just weren&#8217;t with the Kadena High School squad.

The mid-April trip marked the first time the school had sent a cheer squad to the championships, according to coach Tammy Marshall.

They were relatively green as a unit, she said.

&#8220;The squad formed right after basketball season and we only had about a month to practice. We took two boys who had no experience in cheerleading. We also took a girl from the (junior varsity) squad who didn&#8217;t have as much experience.&#8221;

And they were busy kids; even finding time everyone could practice was tough. Sometimes they started practice at 8 p.m., the coach said.

Then there was the competition itself: It was just one day and the eight-girl, four-boy squad had just 2&#189; minutes to give a performance that had to include stunts, dancing, tumbling and a cheer.

And they had to bring all this off on stage in front of a major crowd, said team captain Nicole Marshall, who is the coach&#8217;s daughter.

All of which might explain her description of the team&#8217;s attitude entering the competition.

It showed, said her mother, the coach.

Apparently, the judges agreed: The Kadena squad, competing against seven teams in the small-schools coed division, placed third. And it won the sportsmanship award over 22 teams in the high school division.

But team members feel as if the sportsmanship award is the most important, she said &#8212; and they were just as shocked to win it because they didn&#8217;t even know it existed.

The high finish and overall experience at the competition excited the squad even more about cheering, the coach said.