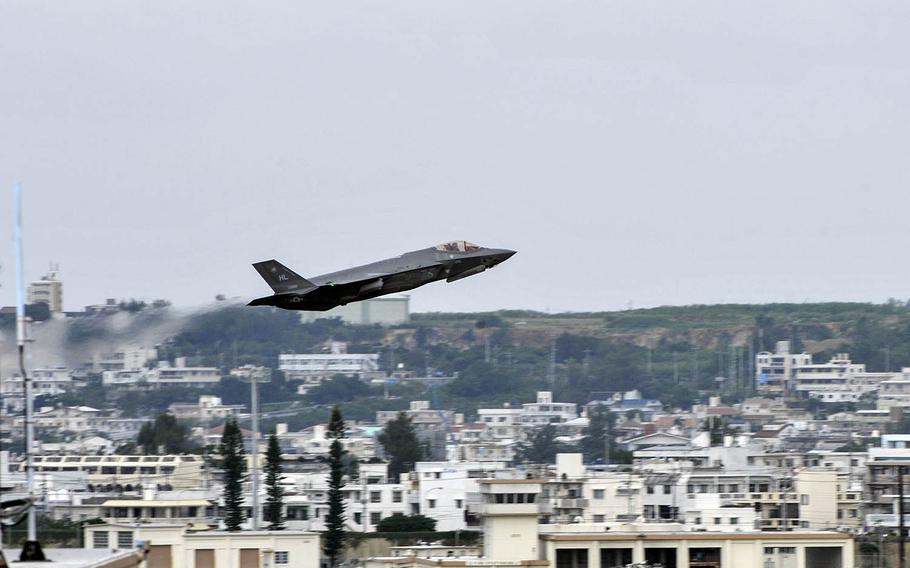 CAMP FOSTER, Okinawa — One of America’s newest and most advanced stealth fighters lost a part Thursday while flying a routine mission off the coast of Okinawa, Air Force officials said.

A panel fell off an F-35A Lightning II at approximately 10:30 a.m., about 65 miles east of the southern island prefecture, said a statement from Kadena Air Base’s 18th Wing. The 1-pound panel, which was approximately 12 inches high and 24 inches long, was “most likely lost over the ocean.”

The pilot’s wingman noticed the problem as the fighter prepared to land, the statement said. A post-flight inspection later confirmed that the part was missing.

Air Force officials declined to discuss the nature of the training being conducted during the incident.

The incident may ruffle some feathers on Okinawa, where a small but robust protest movement, backed by popular support, has railed against the safety and noise of U.S. military aircraft.

A dozen F-35As from the Utah-based 34th Fighter Squadron arrived at Kadena last month for a six-month deployment that’s part of U.S. Pacific Command’s theater-security program. Their arrival marked the F-35A’s first deployment to the region.

In January, a squadron of F-35Bs – the short-takeoff, vertical-landing variant of the aircraft - arrived at Marine Corps Air Station Iwakuni, Japan, to replace the F/A-18 Hornet, AV-8B Harrier and EA-6B Prowler.

Like with most new platforms, the fighter’s development was plagued with issues, and at one point President Donald Trump indicated he might scrap the program altogether.