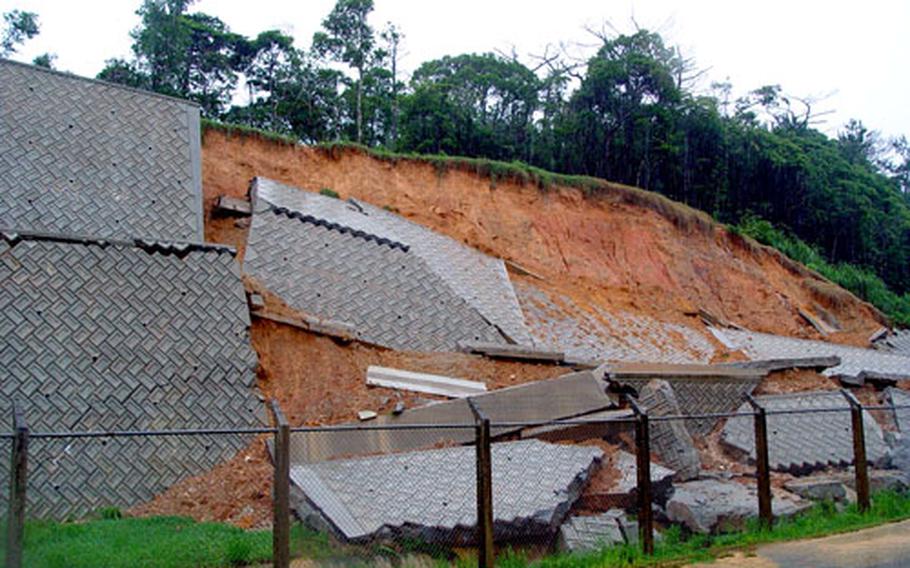 A retaining wall in the Kadena Air Base Munitions Storage area on Okinawa collapsed amid the stress of unrelenting rain on June 17. (U.S. Air Force photo)

A retaining wall in the Kadena Air Base Munitions Storage area on Okinawa collapsed amid the stress of unrelenting rain on June 17. (U.S. Air Force photo) 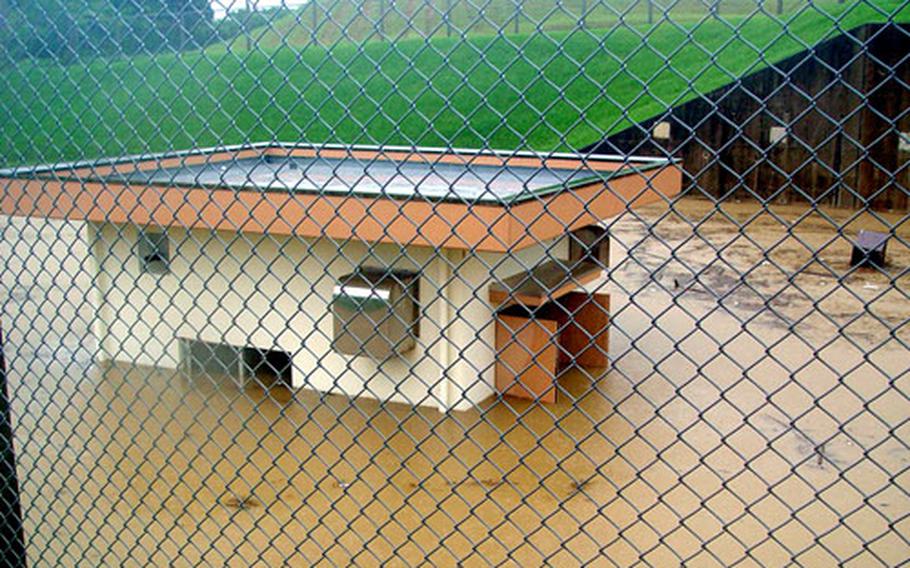 A Kadena Air Base power station is submerged in the wake of heavy rain on June 17. (U.S. Air Force photo)

Okinawa base residents continue to feel the effects of the more than $2 million in damages that torrential rains in mid-June caused islandwide.

Most prominently, a water-line break caused by rain near Camp Foster inflicted $500,000 in damages and will require a follow-up project after temporary repairs were made to get water running again, an Air Force spokesman said. Although the break occurred on a Marine base, the Air Force controls the water system.

Since then, residents in Camp Foster&#8217;s Futenma housing area have had intermittent water loss and sediment buildup in their tap water.

Watching tap water pressure drop precipitously has become almost a daily ritual for Janice Baker, a Futenma housing resident. She and other area residents noticed sediment in their water after the worst of the rains on June 17, and last saw the sediment on June 27.

She was told water coming from her sputtering tap was drinkable, but doesn&#8217;t believe the discolored water is healthy.

Portable water tanks have been placed throughout the area since last Friday, when the water wasn&#8217;t safe to drink. But Baker said several tanks are on the mostly empty 900 block, and none are on her street, where most houses are occupied.

Air Force personnel were unavailable for comment on the status of the water in the housing area.

Most Marine camps reported some flooding and landslides last month. Minor repairs will take two to three months, a Marine spokesman said. Kadena Air Base suffered as much damage as any base on the island.

The running water caused more than $400,000 in damage to stormwater and sewage systems, including drainage area and embankments, Paoli said.

Roads along Kadena took more than $450,000 in damage, including from sinkholes formed under pavement in parking lots. Damage to buildings, leaking roofs, flood-ravaged carpets and similar problems totaled $765,000.

Most of the small-scale repairs are completed and paid for, while roof and carpet repairs are in progress, Paoli said.

However, the massive damage hit the base&#8217;s budget during one of the Air Force&#8217;s biggest cost-cutting years since the 1990s. The base is seeking additional funding for its base housing and maintenance budget from higher headquarters, Paoli said.

Kadena received 37.17 inches of rain in June, according to the 18th Wing Kadena Weather Flight.

Naha received 34.4 inches of rain, shattering the 1892 record of 27.8 inches, according to the Okinawa Meteorological Observatory.