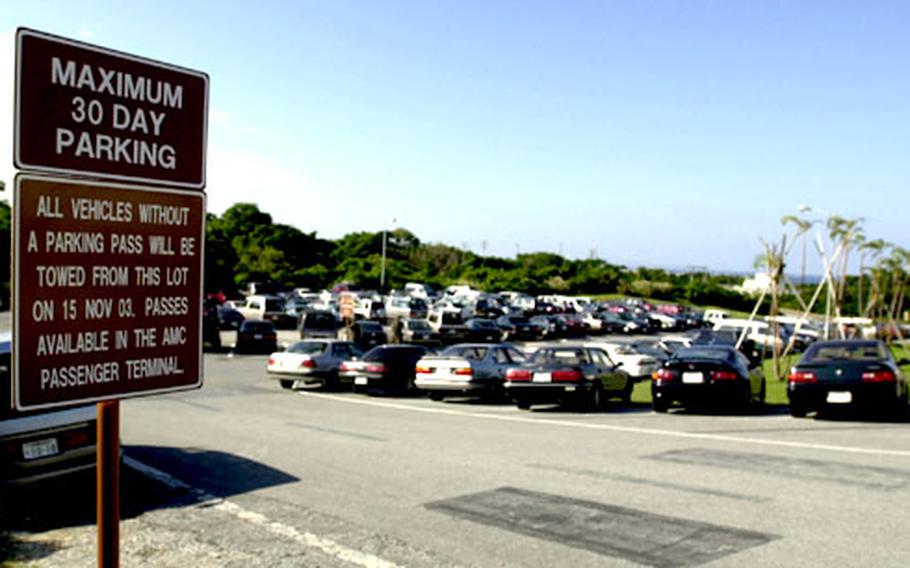 Under a new plan, parking passes must be obtained from the passenger terminal at Kadena Air Base, Okinawa, for all persons parking at the long-term lots. Violators will be ticketed and towed, officials say. (Fred Zimmerman / S&S)

KADENA AIR BASE, Okinawa &#8212; All cars parked in the airport passenger terminal&#8217;s lots must have parking permits under new, security-prompted regulations, base officials said.

Previously, passengers departing from the 733rd Air Mobility Squadron&#8217;s passenger terminal could park cars at several lots near the terminal without parking permits.

Now, they must apply for the permits at the Passenger Information Counter, said 18th Wing spokesman Charles Steitz. Starting Saturday, cars without a current pass will be ticketed and possibly towed.

&#8220;The terminal lots were filled with abandoned cars and cars parked in excess of 30 days,&#8221; Steitz explained. &#8220;What brought about the change was overcrowding, force protection and safety concerns.&#8221; He noted many people leaving the island on orders abandoned their cars in the lots instead of arranging to have the vehicles&#8217; registration cancelled.

To obtain parking passes, passengers checking in should tell the AMC customer service representative what kind of pass they need and present documentation such as temporary-duty orders, tickets or space-available flight selection verification.

They also must present an identification card and the make, model and license plate number of the car they intend to leave.

Construction on a new &#8220;drop-off&#8221; lane in front of the terminal exacerbated the parking problem by hindering traffic, Steitz said. The area will be available for temporary parking and passenger and baggage drop-off after the project is completed in late December or early January, he said.

Meanwhile, one runway will remain shut for 120 days to allow for regrooving, removal of rubber melted from plane wheels, sealing concrete joints, repair or replacement of concrete sections and repainting, Steitz said.

An Okinawa contractor was awarded the $1.3 million runway project, Steitz said. A Kadena runway last was closed for renovations in 1990.