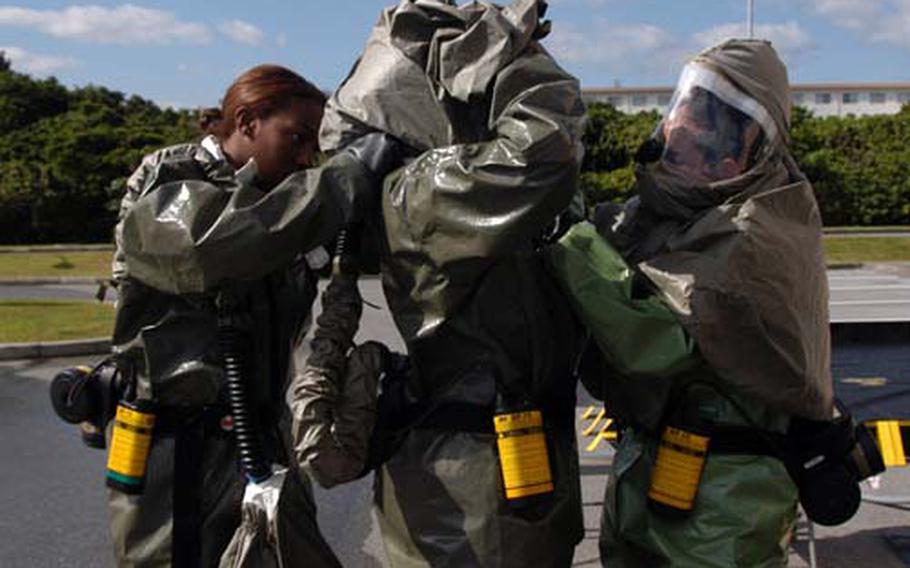 Senior Airman Jazmine Clark, left, Staff Sgt. Keneisha Fuller, center, and Staff Sgt. Jeanett Vielman, all of the 18th Medical Group, suit up for a decontamination drill Thursday at Kadena Air Base on Okinawa. The exercise involved cleaning up victims exposed to hazardous chemicals. Thousands of airmen in the 18th Wing were participating in emergency response drills as part of a weeklong Operational Readiness Exercise. (Natasha Lee/S&S)

KADENA AIR BASE, Okinawa &#8212; Thousands of airmen from the 18th Wing participated in a weeklong readiness exercise this week meant to strengthen combat response.

"These units train by themselves, almost like in a vacuum," said Plank, chief of the 18th Wing&#8217;s exercises, inspections, plans and programs. "This exercise ups the pressure on them a little bit and lets them work as a team, so when they get to combat, there&#8217;s no surprises."

At a decontamination station Thursday at Kadena Air Base, a dozen airmen from the 18th Medical Group sprayed and sponged victims of a mock chemical spill.

Airman 1st Class Michael Swann of the 18th Operations Support Squadron, who suffered a bloody leg, was wheeled through the tent on a rolling stretcher device where water hoses and a soap solution awaited him.

Dressed in protective suits, members of the 18th Medical Group quickly cut away his uniform before hosing him down and sending him off for medical treatment at a nearby clinic.

Air Force Maj. Chris Bishop, a team evaluator, said the goal is to provide a safe environment to clean patients exposed to chemicals and to protect the medical staff.

A similar zone was set up in October, after a suspicious package was found on base. At the time, airmen set up the 400-pound tent and were on standby until it was learned that the package contained baby powder, Bishop said.

Communication and knowledge of a patient&#8217;s injuries and exposure to hazardous chemicals are vital to the process, said Bishop, a bioenvironmental engineer flight commander.

Wounded patients need to be cleaned quickly, so they can receive medical treatment, he said.

"It&#8217;s the chaos of moving patients quickly and constantly monitoring a patient&#8217;s health," he said.

The exercise was expected to end Friday, Plank said.

"Things are going very well, we have a highly motivated group," Plank said.

One of the difficulties is creating realistic scenarios in a peacetime setting, Plank said.

So within the combat scenario, he said, there were 826 additional situations that 18th Wing units had to respond to &#8212; like an automobile accident or a food poisoning incident at the base high school.

"Within this week they have the combat environment and their day-to-day duties, so they&#8217;re having to do everything all at once," he said.

Observations and recommendations from the exercise&#8217;s 350 evaluators will be released later in a report to be reviewed by all the units, Plank said.