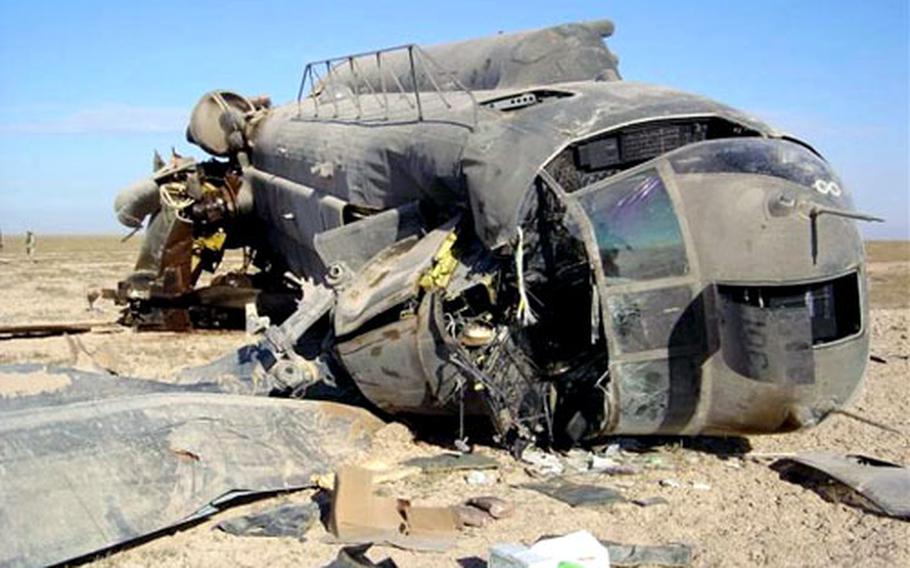 KADENA AIR BASE, Okinawa &#8212; Two Kadena airmen recently had their names included among some of the most renowned aviators in history.

Pararescuemen Staff Sgt. John Griffin and Tech. Sgt. Michael Rubio and 11 fellow crewmembers received the Mackay Trophy last month in Washington honoring their rescue of five Army aviators in 2004 as the most meritorious flight of the year.

But awards were the farthest thing from their minds the night in April 2004 that the crew took off from Balad Air Base in Iraq in two HH-60 Pave Hawk helicopters just after midnight.

Within miles of the crash site, it became apparent that no one would know for sure what was going on until they were right on top of it.

A massive sandstorm limited visibility to less than 50 feet in front of them, even with advanced night-vision goggles, Rubio said.

The pilots of both helicopters were flying based on their instruments. Through the soup, the crew spotted fires rising from the crash site, along with a strobe light about 100 yards from the fire.

Once on the ground, Griffin headed toward the strobe light, where he found five downed Army aviators.

Peering through the gritty air, he attempted to positively identify them over the whirring chopper noise.

Griffin saw an identification card taped to one soldier&#8217;s helmet. After asking if she was being coerced or held at gunpoint, he asked her to identify the others.

The longer the rescue crew stays, the longer it is a target. The crews collected the downed soldiers, pulled away and headed back to base. There was enough time for a sigh of relief &#8212; but not much more.

On their way out, surface-to-air missiles shot by the helicopters. Rubio fired chaff and flares to detour the missiles.

But the countermeasures didn&#8217;t stop one of the missiles from slicing through the air within feet of the helicopter&#8217;s rotor path.

The flight was Rubio&#8217;s first nontraining mission, and easily his most memorable. But at the time, it didn&#8217;t seem like a very big deal.