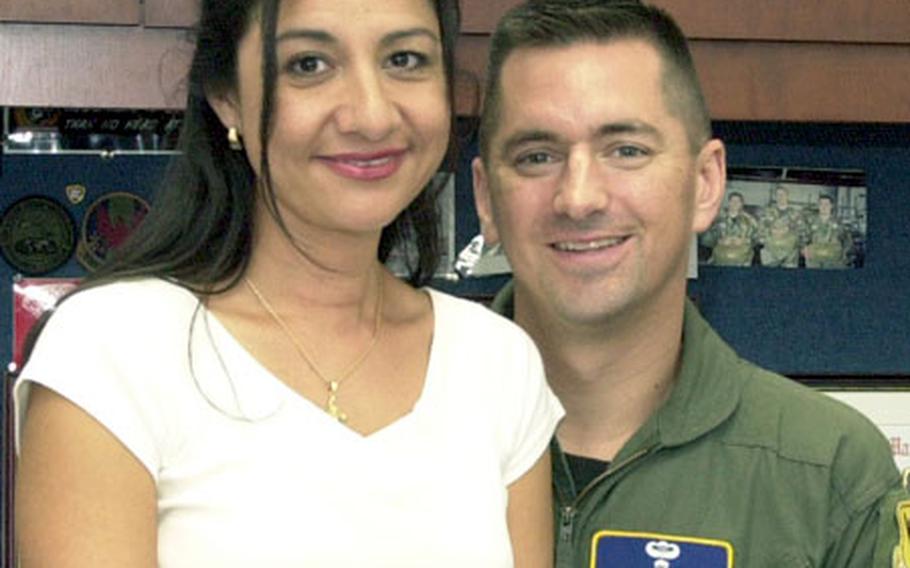 The heart pounds just a bit louder, demanding more blood and oxygen. The muscles were spent long ago but after months of training, they remember what to do.

At that moment, something special motivates the stalwarts to break through &#8220;the wall.&#8221;

When Master Sgt. Joe Dunteman takes to the pavement for his first marathon at 9 a.m. Sunday, he&#8217;ll have that extra motivation running beside him. His wife, Laura Dunteman, will be with him during the 13th Annual Okinawa Marathon, just as he was by her side during darker days.

&#8220;We knew when we came to Okinawa that we wanted to run a marathon together,&#8221; said Joe, who arrived with his family in 2003. It made sense; Laura, a high school track star, already had run a marathon. Joe had done several shorter runs, mixed with a few triathlons.

Those plans were put on hold after Laura was diagnosed with thyroid cancer. They flew to Hawaii for precautionary surgery to remove the cancerous parts of her thyroid. &#8220;Precautionary&#8221; turned into &#8220;aggressive surgery,&#8221; Laura said, once doctors took a closer look at the cancer&#8217;s advanced stage.

Little did he know he also was training for Laura&#8217;s hospital discharge. The day after she left the hospital, the Duntemans climbed Diamondhead, a famed mountain on Maui known for its spectacular view of the island. Ten days later they climbed it again. Six weeks later, they finished a 10K race.

The experience also spurred the Duntemans to become the running equivalent of the von Trapp family. Their daughters &#8212; 11-year-old twins and a 6-year-old &#8212; all run 5K races in times to make most adult weekend warriors think about training a little harder.

Joe and Laura said they look forward to seeing their children in the crowd as they pass through the gates of Kadena Air Base, about 75 percent of the way through the course. Next to finishing the race itself, they say, it will be the highlight of a process that began in November with a four-month training program.

Their longest run came three weeks ago, when they ran from Sunday&#8217;s starting line at Comprehensive Park in Awase to Kadena &#8212; a healthy 20-mile jaunt.

&#8220;I went unprepared and I paid for it,&#8221; said Joe, who said he learned a lesson that day about proper hydration and rest. Why wasn&#8217;t he rested? The night before, he attended a Kadena banquet as one of the nominees for senior NCO of the year.

Joe and Laura say they won&#8217;t be out to win the marathon with the best time on Sunday. For them and many other runners, just finishing the race among the almost 10,000 entered runners will be a victory. They talk of holding hands as they cross the finish line, somewhere in that throng of exhausted competitors.