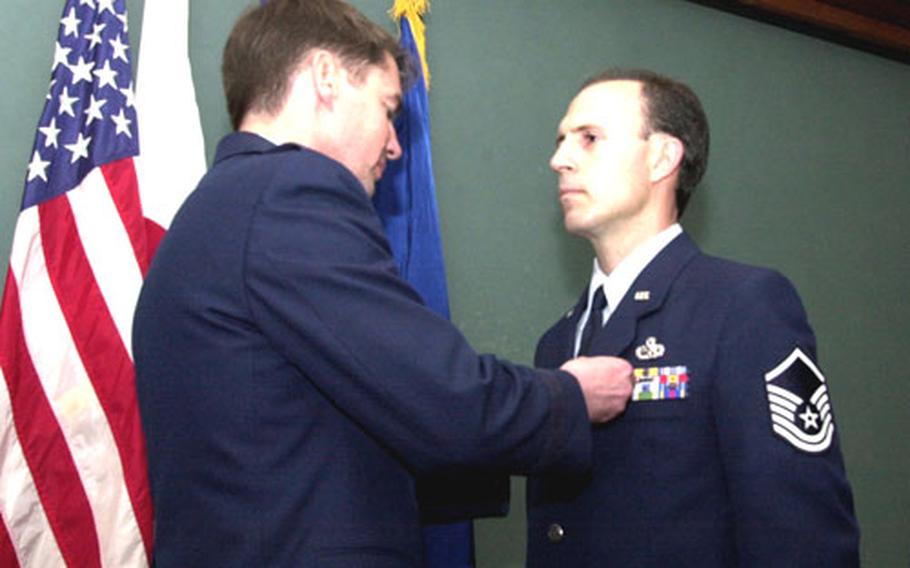 The waves had swelled to almost four feet and the riptide churned the breaking nearshore waters with enough force to pummel anyone who dared challenge it.

&#8220;No one has any business being in the water today,&#8221; thought Air Force Master Sgt. Randolph Hodges, then stationed at Tyndall Air Force Base, Fla.

On May 10, 2003, the water resembled the Atlantic Ocean&#8217;s thrust of whitecaps and crashing waves much more than the usual Gulf of Mexico ripples found at Tyndall Beach near Panama City in the Florida Panhandle.

Hodges, who now lives at Kadena Air Base, Okinawa, said he had no intention of taking on the unruly tides. He and his son R.J., then 10, had planned a laid-back day of fishing along the coast.

But before Hodges could so much as catch a baitfish, those plans changed.

What happened next would earn Hodges the Airman&#8217;s Medal for heroism, which he received at Kadena Air Base on March 31 from Brig. Gen. Jan-Marc Jouas, 18th Wing commander. Dozens of airmen attended the ceremony to congratulate Hodges, including Gerald Murray, chief master sergeant of the Air Force.

A medal was the last thing Hodges was thinking of on that day at the beach, when a woman ran frantically toward him, pointing to three men struggling in the water.

Randolph Hodges called out to the three men, in their 20s, about 50 yards offshore. The man closest to him was flailing.

The third swimmer also seemed able to hold out a little longer on his own, so Hodges grabbed the man closest to him by the right arm, trying to keep him above water.

Meanwhile, R.J. went to work on the beach. He searched for rings, rafts, boogie boards &#8212; anything that could float.

After several minutes, Hodges&#8217; kicking had slowed and his muscles ached. He swam parallel to the beach to avoid being swallowed by the riptide. But the riptide pushed Hodges and the three swimmers farther out into the ocean. The shoreline got smaller with each passing minute.

Word of the danger had spread along the beach, reaching two other airmen: Staff Sgt. Christopher Kinter and Capt. Kenneth Ebi. R.J. gave them a large, red raft he had collected along the beach. Kinter and Ebi then rafted out to Hodges and the swimmer he had kept afloat. The three airmen then towed the remaining swimmers safely to shore.

The 15 minutes Hodges spent in the water felt like hours, he said.

One of the swimmers was treated for dehydration, but none suffered any serious injuries.