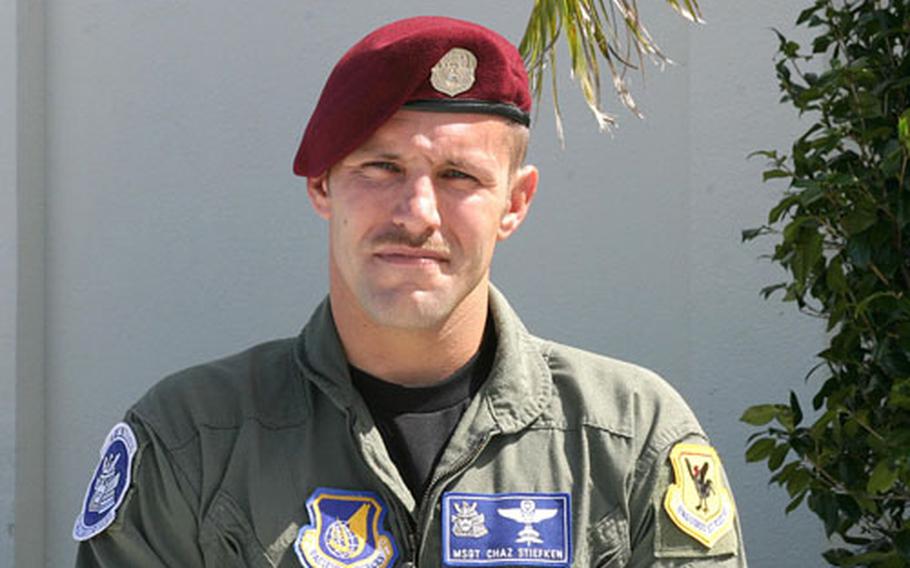 Master Sgt. Charles Stiefken, 35, a paramedic with the 18th Operations Group, Kadena Air Base, saved the life of a 3-year-old child while on leave in Anchorage, Alaska, June 17. (Courtesy of USAF)

KADENA AIR BASE, Okinawa &#8212; The quick thinking of a Kadena airman on leave in Alaska last month rescued a 3-year-old boy crushed by an overturned van.

Master Sgt. Charles Stiefken, 35, had taken part in an operational inspection of the Air National Guard&#8217;s 176th Wing and was visiting his family in Eagle River, just north of Anchorage, on June 17. That night, while driving to his dad&#8217;s house for dinner, he passed a van that was tipped onto its side in a ditch.

Stiefken later learned that the Volks- wagen van had been parked, engine still running, at the crest of a hilly driveway while the driver, Mark Spindler, 28, went back inside his house to fetch something. His son, Tidal, was inside and somehow knocked the gearshift into neutral. The van rolled down the hill and turned on its side in a ditch.

&#8220;The father was running frantically around, saying he couldn&#8217;t find his son,&#8221; Stiefken said. The airman got inside the van and found that the sliding side door had opened and the boy had been thrown out. The body of the van had fallen on the child, pinning him underneath.

By then, a sheriff&#8217;s car arrived and the men managed to tip the van off the child.

He said the child hung on to life for another four days before succumbing to his serious head injuries.

Stiefken, who&#8217;s married and has two boys of his own, ages 9 and 10, was given a special lifesaving award by the mayor of Anchorage and has been nominated for an airman&#8217;s medal by the 176th Wing.

&#8220;But after it was all over, you know one of the first things I did later that night is call my boys back on Okinawa and tell them how much I loved them.&#8221;