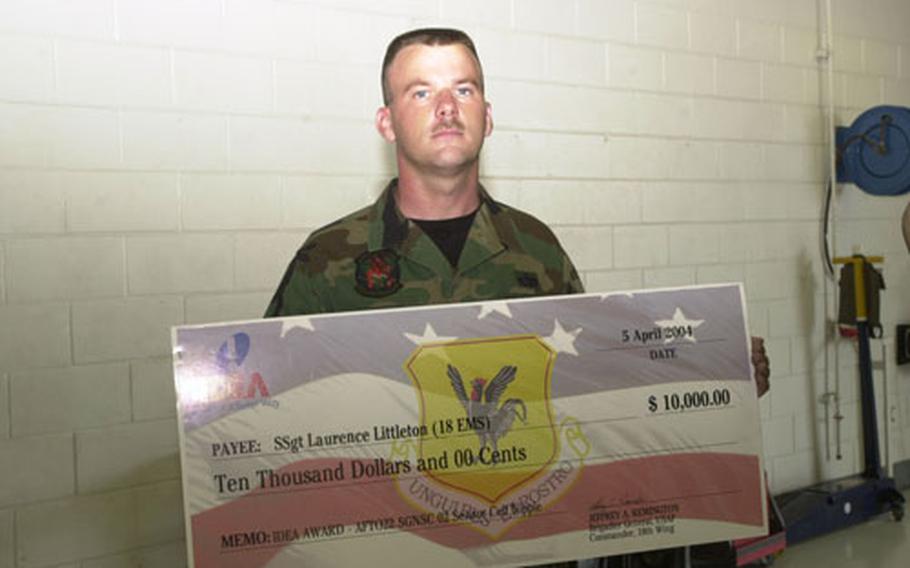 Air Force Staff Sgt. Laurence Littleton holds the big $10,000 check he was presented with for coming up with an idea that saved the Air Force an estimated $162,000 in one year. (Fred Zimmerman / S&S)

Air Force Staff Sgt. Laurence Littleton holds the big $10,000 check he was presented with for coming up with an idea that saved the Air Force an estimated $162,000 in one year. (Fred Zimmerman / S&S) 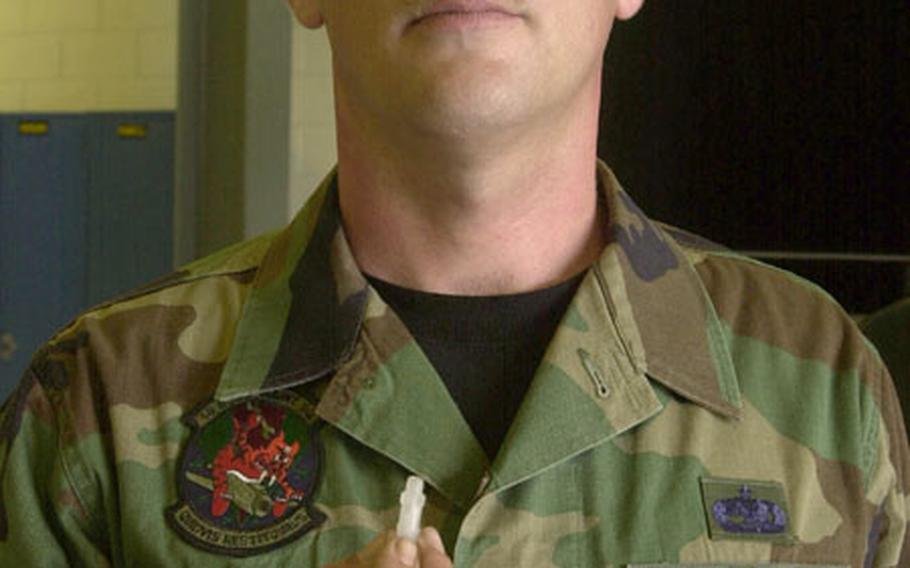 Air Force Staff Sgt. Laurence Littleton, an aerospace ground equipment craftsman, hold the small plastic stem from an oxygen sensor that earned him $10,000. Littleton figured out a way to replace the stem at a cost of just over $39, compared to the old way of replacing the whole part at more than $635. (Fred Zimmerman / S&S)

KADENA AIR BASE, Okinawa &#8212; Finding smarter, better ways to do things can help make anyone&#8217;s job easier. But finding a better way to do things also can save money &#8212; which made one Air Force servicemember&#8217;s wallet a lot thicker.

The IDEA program allows Air Force members to submit cost-saving ideas, said Littleton. If they&#8217;re deemed worthy and adopted as Air Force policy, the servicemember can receive a monetary award. Littleton said the servicemember would get 10 percent of the amount saved, with a maximum of $10,000 and a minimum of $200.

While working on a power logistics cell in a self-generating nitrogen cart, Littleton noticed a small plastic stem was getting broken off the unit&#8217;s oxygen sensor. When this happened, Littleton said, the entire cell was being replaced at a cost of just more than $635. Littleton figured there had to be a cheaper way of fixing the parts and made a few calls.

Through his research, Littleton found the plastic part could be replaced at a cost of $39.23. He then knew he had an idea that could be worth some money and submitted it up his chain. He said the paperwork got kicked back several times but after one year, his idea got final approval; it&#8217;s now Air Force policy.

He recently proposed using a $200 hand pump currently in the supply system for a tank dolly. Currently, when a hand pump goes bad, it is replaced with another costing $1,000, Littleton said.

His other pending proposal involves two parts on a generator used for testing electrical components on airplanes. Littleton said the current front axle assembly costs more than $4,000 for the generator, but he found an assembly of the same dimensions in the supply system for just more than $1,000. He also found a $39 overflow tank in the supply system that&#8217;s similar to the generator&#8217;s overflow tank, which now costs $438.

Littleton said once IDEA suggestions are approved, an e-mail tells all shops to make the change. He said the next time the technical manual is published, the change is put in writing.

As for the just more than $7,000 (after taxes) that he banked, Littleton said the money already is tucked away in his children&#8217;s college funds.