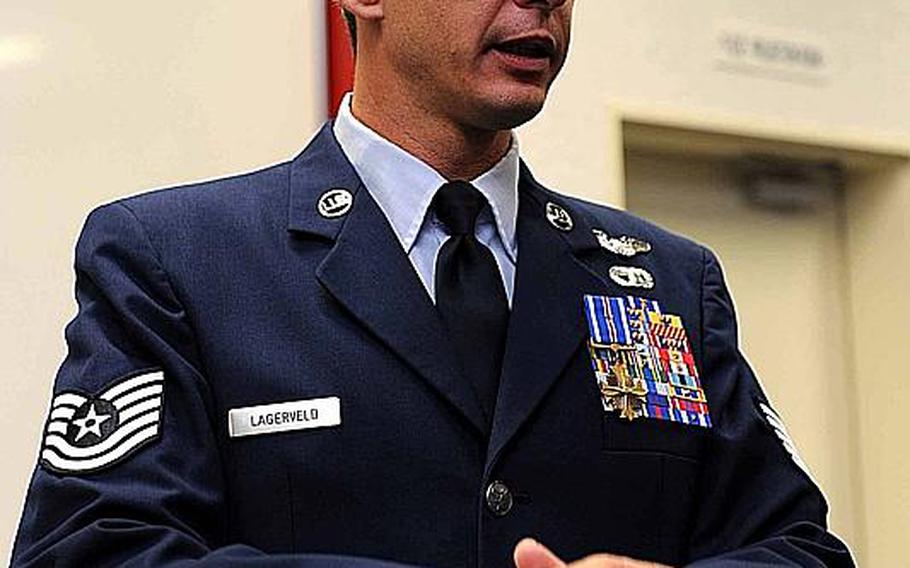 Tech. Sgt. Scott Lagerveld wears the Distinguished Flying Cross medal with V device during a ceremony at Kadena Air Base on Monday. (Brooke Beers/Courtesy of the U.S)

CAMP FOSTER, Okinawa &ndash; An airman stationed at Kadena Air Base has earned one of the nation&rsquo;s highest military honors for a combat rescue mission in Afghanistan in the summer of 2010 when he and his crew ran eight non-stop casualty evacuation flights that included the daring rescue of a U.S. soldier who had fallen off a mountain.

Tech. Sgt. Scott Lagerveld, 35, a Pave Hawk engineer with the 33rd Expeditionary Rescue Squadron, received the Distinguished Flying Cross for valor in battle during a ceremony Monday at the air base, with 18th Air Wing commander Brig. Gen. Matthew Molloy presenting the medal.

Lagerveld told Stars and Stripes he hadn&rsquo;t considered the danger of the mission at the time and the thought of receiving a medal for his heroism downrange never crossed his mind.

&ldquo;You don&rsquo;t really think about the bullets,&rdquo; he said Thursday. &ldquo;The only thing you think about is getting the guy [who is wounded], getting him in the door and going for the next guy who gets picked up.&rdquo;

In 2010, Lagerveld was deployed with the squadron and other Kadena airmen to Bagram Air Field in Afghanistan, where he was part of the flight crew on a medical evacuation helicopter. Lagerveld&rsquo;s Pave Hawk was working with Army combat units in the Kunar River Valley on June 27 when a battle with insurgents flared along the steep mountain banks.

Amid the thud of U.S. howitzers and squawk of radio calls, the crew began dropping in and flying out the soldiers who were wounded, some severely, by the enemy gun fire.

At some point in the battle, an Army lieutenant who had been manning an over-watch position along the surrounding mountains fell about 200 feet down the face, according to Lagerveld and an Air Force citation summary.

The radio call came in to rescue the officer, but moments later the crew was diverted to evacuate another soldier who had been shot through the neck. That pickup put the crew amid a firefight where two soldiers with an M240 machine gun held off the enemy while others loaded on the critically wounded soldier, who later died.

The crew then flew up to the mountainside to spot the fallen officer.

&ldquo;We found his body armor in a pool of blood and he was actually 30 to 40 meters farther down,&rdquo; Lagerveld said.

As the Pave Hawk hovered, Lagerveld lowered a para-rescue jumper down on a rope to help bring up the officer, who had broken his back and was now unconscious.

The bullets started coming in when the jumper hit the ground and were bouncing off the rock face of the mountain around the helicopter.

&ldquo;My para-rescue man bear-hugged [the lieutenant] with his arms down so he wouldn&rsquo;t fall out of the strop,&rdquo; a harness used by rescue crews, Lagerveld said.

Lagerveld hoisted the two back up to the door of the Pave Hawk, but Lagerveld could not get traction on the slippery floor of the bird and it took three attempts to get them into the aircraft.

Finally, the two tumbled through the door along with a tangle of rope and the unconscious officer landed on top of Lagerveld.

They pulled away from the mountain and flew back to the evacuation point, a nearby forward operating base. None of the crew were injured by the attack.

The lieutenant would survive the battle despite the long fall down the mountain. After going to the United States to heal his back, which was broke in two places, he would return to Afghanistan and his unit &ndash; and eventually track down Lagerveld to thank him for the rescue.

For Lagerveld, there was little time for personal reflections on the mission. The rest of the day was spent filling out paperwork and recounting details to his command.

He is now back at Kadena and is scheduled to graduate from the base NCO academy on Thursday.

After all, it was his Air Force instructors who helped him learn how to stay cool under the pressure of combat, even when the bullets were flying.

&ldquo;It all starts with the initial training and the guys who train you,&rdquo; he said.