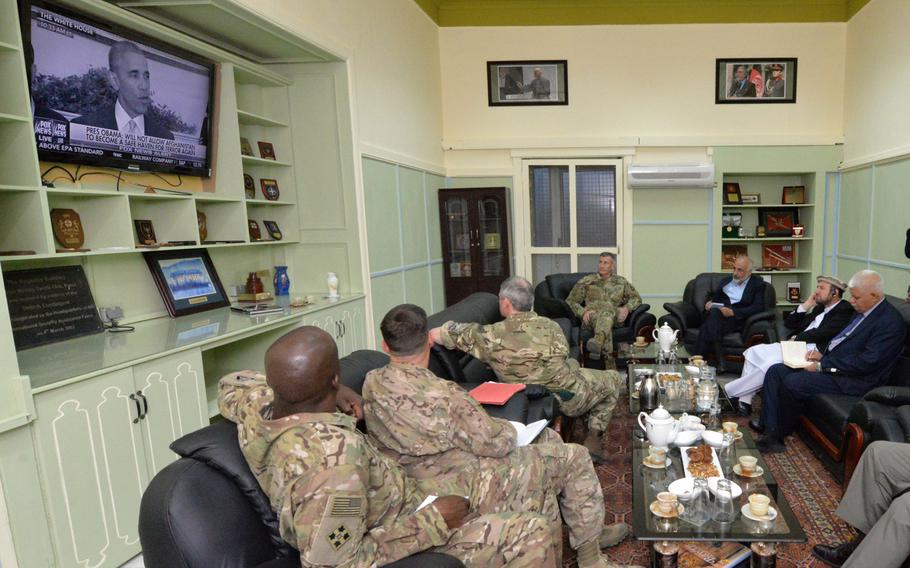 KABUL, Afghanistan — The Afghan government on Thursday welcomed a decision by President Barack Obama to keep a robust military presence in Afghanistan until early next year.

Speaking at the White House Wednesday, Obama said some 8,400 American troops would remain in the country. Earlier administration plans would have reduced numbers from the current 9,800 to 5,500 before January.

“(I) welcome President Obama’s decision on keeping 8,400 troops in Afghanistan,” Afghan President Ashraf Ghani said on Twitter after the change was announced.

“It shows continued partnership between our nations to pursue our common interests,” he said.

“Terrorism is not only directed towards Afghanistan; it is not only a regional threat but a worldwide threat. The decision made by the U.S. president will help Afghanistan, but it will also help the world,” Radmanish said.

Obama said it was in the United States’ interest to keep most troops in Afghanistan, considering its “precarious” situation and all the American blood and treasure invested in the country over the past 15 years.

The war is estimated to have cost the United States about $1 trillion. More than 2,300 U.S. military deaths have been recorded. At the height of the conflict after 2010, the international coalition consisted of 100,000 Americans and about 40,000 NATO allies.

The United States and NATO officially ended combat operations in Afghanistan at the end of 2014, reducing their mandate to training, advising and assisting Afghan security forces. U.S. forces also have continued to conduct counterterrorism operations against groups like al-Qaida and the Islamic State.

However, since the shift, the Taliban — who are outnumbered by about 10-to-1 by the 352,000-strong government army and police forces — have made significant gains across the country. In response, Obama last month augmented the military’s role to allow U.S. commanders to use American air power for offensive missions against the insurgents and to send troops to fight alongside regular Afghan forces. In the past they provided support only to Afghan special forces.

The announcement to keep the bulk of American troops in Afghanistan came ahead of the two-day NATO summit in Warsaw, Poland, which opens on Friday. Coalition members will announce their individual commitments toward Afghanistan at the summit or at a force-generation conference soon thereafter.

“The decision I’m making today can help our allies and partners align their own commitments,” Obama said Wednesday. “All of us have a vital interest in the security and stability of Afghanistan.”