Kabul to release Taliban POWs ahead of peace talks 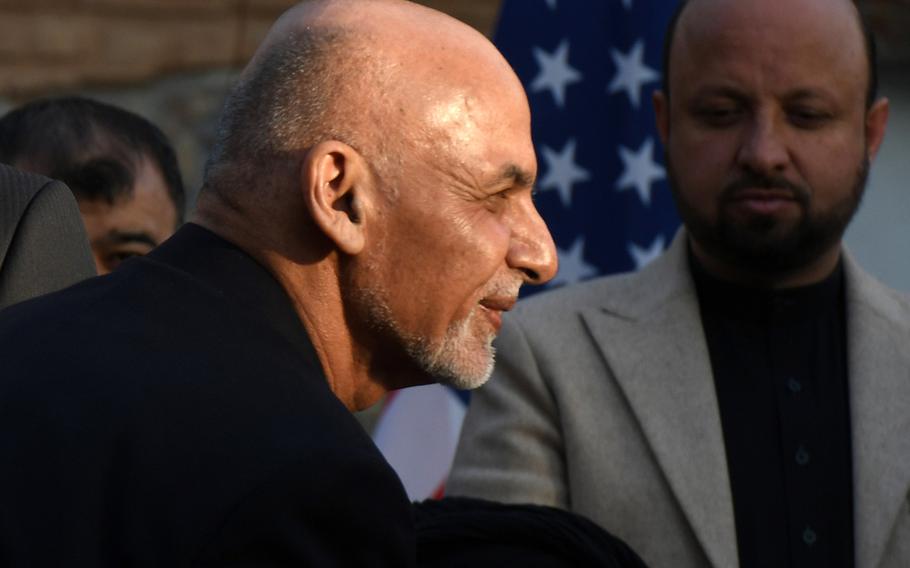 Afghan President Ashraf Ghani, shown at a ceremony in Kabul to mark the signing of the U.S.-Taliban peace deal, said Wednesday, March 11, 2020, that he would allow some Taliban prisoners to be released from jail so that intra-Afghan peace talks could begin. (Phillip Walter Wellman/Stars and Stripes)

KABUL, Afghanistan — Afghan President Ashraf Ghani agreed on Wednesday to release Taliban prisoners so that peace talks can begin between the government and insurgent group.

The launch of intra-Afghan talks is a key precondition for the complete withdrawal of U.S. forces from Afghanistan. A phased withdrawal began this week and will be completed in 14 months if all sides fulfill commitments outlined in a deal signed by the U.S. and the Taliban on Feb. 29.

U.S. officials have expressed doubts that the Taliban will live up to its commitments under the deal and have repeatedly called on them to cut down on violence throughout the country.

Intra-Afghan talks were supposed to kick off on Tuesday but were delayed over a disagreement about the prisoner release. The U.S.-Taliban deal, which was reached without Kabul’s participation, says up to 5,000 Taliban fighters should be released from government jails in exchange for up to 1,000 detainees held by the insurgents before talks begin.

The government initially refused this, expressing concern that nothing in the deal prevented the fighters from returning to the battlefield. The POWs are also one of the few sources of leverage Kabul has going into the discussions.

But a decree issued by Ghani on Wednesday said 100 prisoners a day will be released, starting on Saturday, until 1,500 have been freed.

The remaining 3,500 prisoners would be released in groups of 500 every two weeks after the intra-Afghan talks begin, the decree said.

The freed prisoners will have their biometric data recorded and will sign a guarantee that they will not return to combat, it said.

It wasn’t immediately clear whether the Taliban would accept Ghani’s offer or if it would begin to release detainees in its custody. The group told Reuters last week that they would only begin talks with the government after roughly 5,000 of their fighters were released.

The Feb. 29 peace deal calls on the Taliban to release up to 1,000 prisoners and the government to free up to 5,000 detainees by Tuesday, March 10, which was also supposed to be the day intra-Afghan negotiations would begin.

The names of the fighters the Taliban wants freed have been handed over to U.S. negotiators, a spokesman for the group, Suhail Shaheen, said on Twitter Tuesday.

The insurgent group has used “prisoner release … to stall negotiations in the past,” said Andrew Watkins, a senior Afghanistan analyst at the International Crisis Group. “This has the potential to be a big problem.”

Secretary of State Mike Pompeo last week called on the Afghan government and the Taliban “to stop posturing and start a practical discussion about prisoner releases.”

Despite the delayed start to the intra-Afghan talks, U.S. forces began withdrawing from Afghanistan on Tuesday, meeting an initial deadline set out in the U.S.-Taliban deal.

The number of U.S. troops is set to be reduced from about 13,000 to 8,600 by mid-summer. Further drawdowns will depend on the Taliban fulfilling commitments they made in the deal, including starting talks with the government and preventing “any group or individual in Afghanistan from threatening the security of the United States and its allies.”