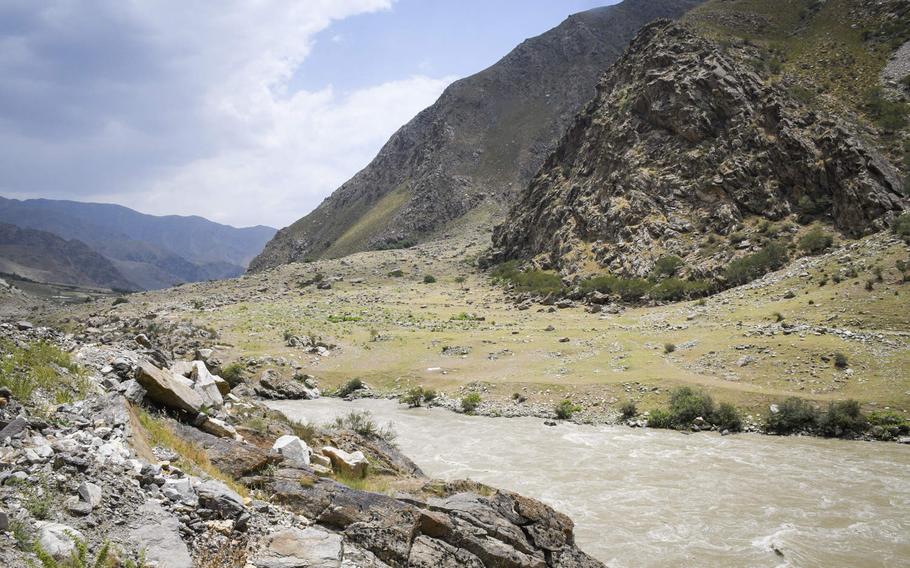 A swollen river roars through a mountain valley in Afghanistan's eastern Badakhshan province July, 2019. The Afghan government last week terminated the contracts for an American company, Centar Ltd., which aimed to begin work on a gold mine project in the mountainous region. (J.P. Lawrence/Stars and Stripes)

The Afghan government has canceled the contract for a U.S.-based company to develop gold and copper mines in a remote province in northeastern Afghanistan, officials said Monday.

Authorities in Kabul determined that the mining company Centar Ltd. had “a lack of financial commitment” before terminating the contract last week, said Abdul Qadeer Mutfi, spokesman for the ministry of mines and petroleum.

When the company signed its contract in October 2018, Centar officials said they hoped to prospect for gold in nearly 250,000 acres of northeast Badakhshan province.

But Centar then failed to pay a performance bond, money that was to be held by the government as a security guarantee, Mutfi said.

“The company was not able to deliver the financial guarantees in the contract,” Mutfi said. “When we are having this kind of difficulty, how can we presume the company can invest on time?”

The decision to cancel the contract was made last week by Afghanistan’s High Economic Council, he said. The body, which is chaired by the president, includes Afghanistan’s top economic ministers and advisers.

Centar has argued they had fulfilled the contract by beginning surveys and making plans to explore the proposed mining area, the company said in a letter to the government that was obtained by the Afghan news agency Khaama. But Centar said it needed additional time to pay its financial guarantees due to what it called an uncertain political situation in Kabul, Khaama reported.

Centar appeared to be referring to the political crisis brewing in Kabul since a disputed presidential poll on Sept, 28. Since then, Abdullah Abdullah, the country’s incumbent chief executive, has rallied thousands of his supporters to stop an ongoing vote recount in order to prevent alleged electoral fraud. The election controversy has raised fears of a repeat of the months of political turmoil that followed the fraud-marred 2014 presidential election because both Abdullah and his main rival, incumbent President Ashraf Ghani, had claimed victory.

Work on the mining project also had been delayed amid fears of insecurity, Centar Ltd. CEO Bradley Barnett said in an interview with Stars and Stripes this fall. He said the company also would face steep costs in providing security for its workers.

The U.S. government invested almost half a billion dollars since 2009 to help Afghanistan tap its vast reserves of minerals, oil and natural gas, which officials have estimated could bring in about $2 billion to the Afghan government each year.

But positive results from the U.S.-funded projects have been limited, a Pentagon watchdog said in 2016, citing corruption as a key reason efforts to develop the extractive industries in Afghanistan had failed.