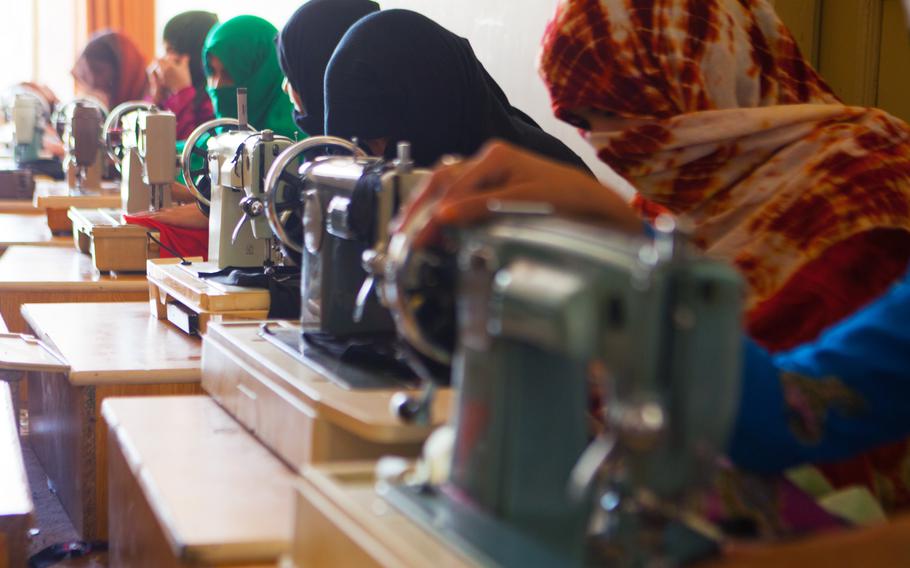 A group of Afghan women use sewing machines to make clothing at the Department of Women's Affairs office in Lashkar Gah, Helmand province, Afghanistan, July 2013. The women attend vocational schools at the DoWA to learn skills that will help them earn an income and financially support their families. (Lia Adkins/U.S. Marine Corps)

KABUL — A controversial change to Afghanistan’s criminal procedure code that could have prevented victims and witnesses of family violence from testifying against abusers has been sent back to the Justice Ministry for amendment, but it’s unclear how significant the changes will be before the article becomes law.

Article 26 of Afghanistan’s draft Criminal Procedure Code sparked an outcry from governments and human rights groups around the world after Parliament passed it early this month. The English translation of the legislation said family members were barred from testifying against relatives. Experts said the original Dari text of the bill was more ambiguous and might have allowed victims to volunteer their testimony, as long as they weren’t forced to do so by authorities.

Raz said Karzai’s cabinet had its first chance to discuss the law on Monday, after it passed through various parliamentary and executive offices.

“Family members should not be stopped from testifying against each other,” Raz told Stars and Stripes. “Anyone would be concerned” about such a law, she added.

The English translation of the law originally read, “The following people cannot be questioned as a witness: … 4) Relatives of the accused person.”

The cabinet sent the draft to the Justice Ministry for a rewrite. When Karzai gets a version he likes, he can enforce it through presidential decree until Parliament returns from vacation this spring, Raz said.

A Justice Ministry official who was not authorized to speak on the record said the ministry will try to propose changes that are “acceptable for the international community and respect all international and domestic laws.”

However, he said he could not predict precisely how the language will change.

The presidential announcement was applauded by the U.S. Embassy in Kabul and by Human Rights Watch, both of which had criticized the draft Article 26.

“We commend President Karzai’s decision to request an amendment to a portion of the Criminal Procedure Code that would have negatively impacted the prosecution of many crimes in Afghanistan, especially cases of violence against women,” the embassy said in a news release. “This is a welcome response to the concerns expressed by many Afghans and their international partners. We look forward to the final passage of a Criminal Procedure Code that protects the access to justice of all Afghans.”

Christine Roehrs, an analyst with the Afghanistan Analyst Network, said that even if changes are made to Article 26 to allow family members to testify voluntarily, the new article will still be weaker than the existing version. The relevant provision of the current code lets officials call relatives to the stand if the victim of the crime is a relative or if a relative first reported the crime.

While there is precedent in international law to prevent family members from being forced to testify against one another, in many countries this prohibition applies only to spouses. Both the current criminal procedure code and the draft article of the new code apply to any member of a vast family network. In Afghan culture, family violence is still often considered a private matter, so family members may be even less likely to speak out against abusers on their own than in other parts of the world.

Still, Roehrs said, it is important that the law explicitly give family members the option if they choose to do so.

As for the international outcry surrounding the proposed legislation, she said, “There’s a lot of international pressure on many things, which doesn’t have an impact at all ... I think there was significant Afghan protest — there was quite some fuss with national media interviewing women’s rights activists — so I would say Afghan pressure might have also had a good deal of influence.”