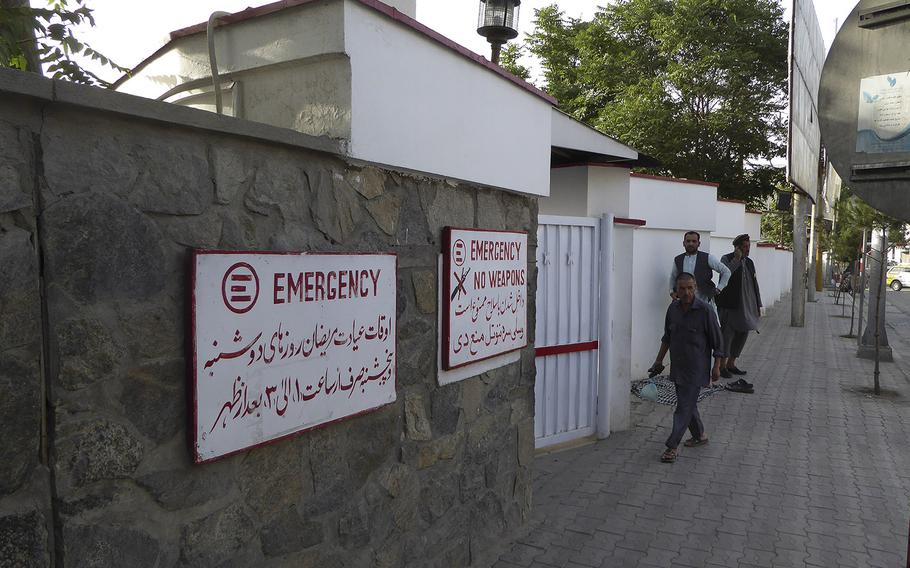 Emergency Center - a surgical hospital in Kabul pictured here - admitted more patients in May 2018 than it has in any month since it opened in 2001. (Chad Garland/Stars and Stripes)

Emergency Center - a surgical hospital in Kabul pictured here - admitted more patients in May 2018 than it has in any month since it opened in 2001. (Chad Garland/Stars and Stripes) A man comforts a young girl of about 4 years old in wheelchair at the Emergency Center surgical hospital in Kabul on Tuesday, June 5, 2018. In May 2018, the hospital treated more than 420 patients, the most it has admitted in one month since it opened in 2001. Of those, 85, or 20 percent, were children under the age of 14. (Chad Garland/Stars and Stripes)

KABUL, Afghanistan — A surgical hospital in the Afghan capital that treats war-wounded from around the country admitted more patients last month than it has in any other month since it opened in 2001.

The Emergency Surgical Center for War Victims, or Emergency Center, reported 421 admissions in May, compared with 384 in the same month last year, when a massive truck bomb went off a few blocks from the medical facility on the last day of the month. The memory of that incident still haunts Dejan Panic, the hospital’s coordinator.

“It was brutal,” he said. “I’m not a guy that gets scared easily, but I think there’s not a day that (passes) that I don’t think about that morning and that bomb going off.”

This May, by contrast, there was a “continuous, extended” period of high patient admissions, Panic said.

Evidence of the consequences of violence in the capital was readily evident on Tuesday evening. A small girl of about 4 years old sat near the entrance to the hospital compound in a wheelchair decorated with Winnie the Pooh characters as a man consoled her. An IV port was taped to her right hand and her left arm was dotted with scabs. Her shoulder was bandaged, as was her midsection and most of her left leg.

A little boy hobbled by cradling a bandaged arm, and on a nearby bench in the hospital garden, a gray-bearded man was relaxing with his shirt off, exposing a heavily bandaged right arm.

Except for February, so far this year the hospital, run by an Italian aid group, has admitted more patients in every month than it did a year earlier. In the first five months of this year, it admitted 322 more patients than in the same period in 2017.

Panic said he’s been in Kabul eight years, but the numbers shocked him.

Dr. Richard Peeperkorn, World Health Organization representative in Afghanistan, said in a statement that the figures were “very worrying” but that they confirm the importance of the hospital’s mission. WHO financially supports the 120-bed hospital, which was built in Kabul six months before the attacks on Sept. 11, 2001. The organization helped enlarge the hospital in 2015, adding three new operating theaters and two dozen beds. But it’s capacity has been strained in recent weeks.

“Our little hospital is really becoming too small,” Panic said. “You can’t put 200 patients in a 100-bed hospital.”

In May alone, the hospital conducted 1,200 surgical procedures, and the staff is exhausted, he said. The patients treated had all suffered penetrating wounds, most from bullets, but a significant number from shrapnel, knives or explosions that amputated limbs or crushed bones.

“There’s not a success story here,” Panic said. “People without legs, without eyes, without limbs, without family, without a future — some of them — paraplegic, quadriplegic.”

It’s not clear whether the increased patient load at Emergency reflects an uptick in violence from the nearly 17-year conflict here. Some of the wounded may have been the victims of criminal violence rather than war, but Panic said it’s a reflection of general instability.

On Monday, the hospital admitted 11 patients wounded in a suicide blast that targeted a meeting of the country’s religious leaders. The clerics had denounced violence and called on the Taliban to accept the government’s offer to end a conflict that they said is increasingly harming civilians.

The number of civilian casualties in the first quarter of 2018, including 763 deaths and 1,495 injured, was in line with figures from the same periods in the prior two years, according to the U.N. Assistance Mission in Afghanistan.

The hospital doesn’t ask about who inflicted the wounds it treats or under what circumstances patients were wounded, and it doesn’t turn away those who might be militants.

In some cases, patients may be choosing to be treated for free at Emergency rather than at some other facility.

The increased patient load may be partly due to the success of Emergency’s network of first aid posts throughout the country. Those local facilities stabilize patients for transport, many of whom would not have lived otherwise, meaning more patients are reaching the hospital, and many of them are in grave condition.

From a medical perspective, Panic said, that’s a positive trend. “This is our mandate, to save lives.”