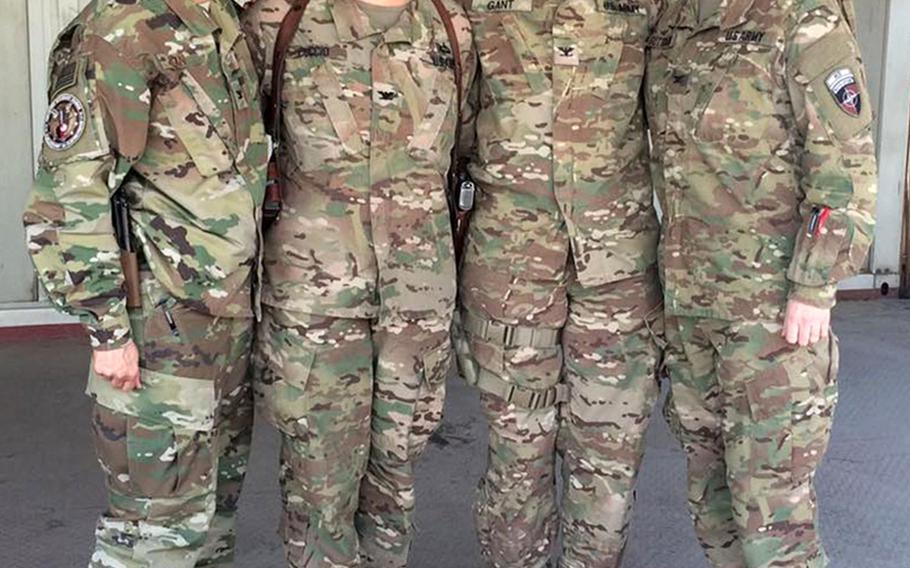 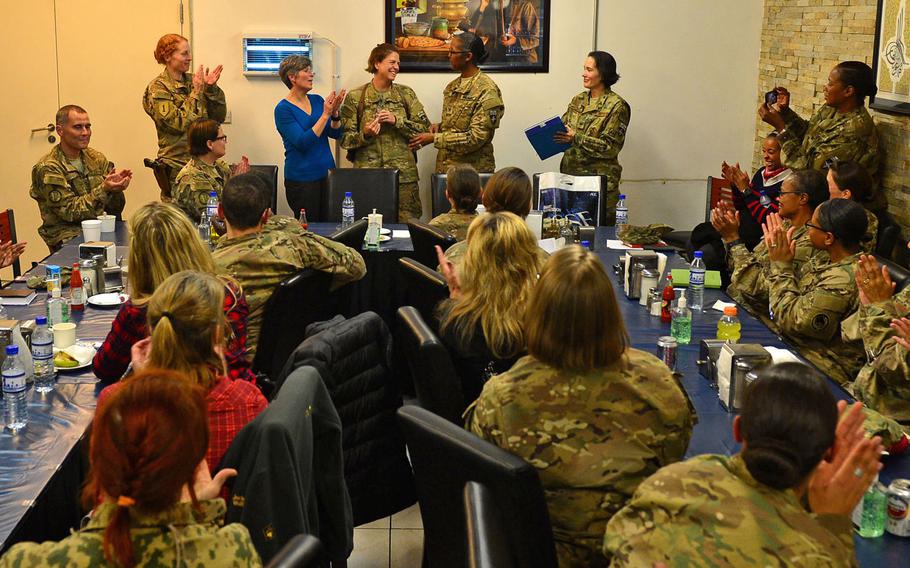 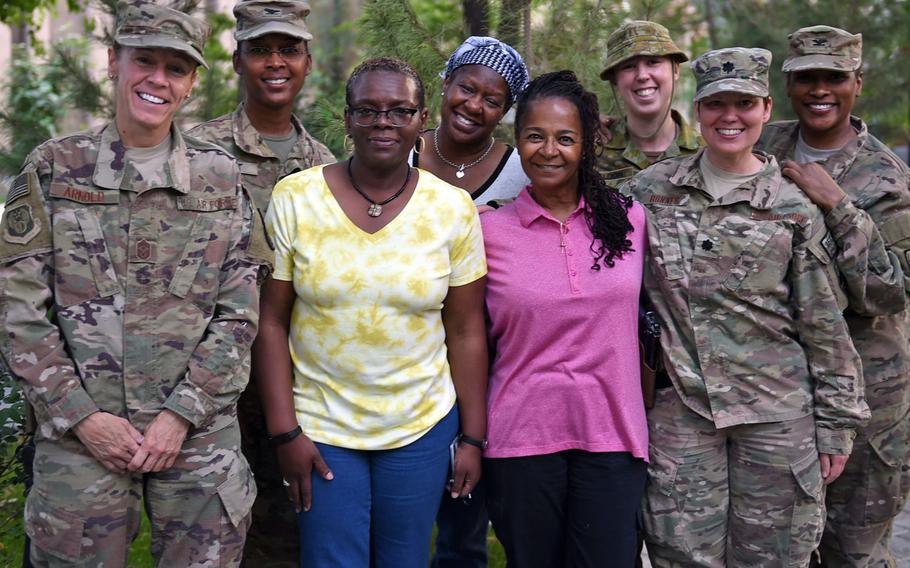 KABUL, Afghanistan — About once a month, a couple of dozen women working at NATO’s Resolute Support headquarters in Kabul get together to offer support and advice to one another, especially to younger servicemembers in the early stages of their careers.

The topics that come up are familiar to women in many businesses, especially male-dominated ones: how to be taken seriously and viewed as competent, how to deal with colleagues who talk over you or ignore you, and how to handle toxic leaders.

Called Sisters in Arms, the group was started last fall by four colonels, all women, who saw a need for a community where younger women could get guidance and help. It’s part of a larger trend throughout the military, with women creating unofficial groups to provide mentoring opportunities.

“In many cases, we have to go into positions and organizations having to prove that we know what we’re doing,” said Col. Antoinette Gant, NATO’s chief engineer in Afghanistan and one of the group’s founders.

In the military, mentors are key to helping younger servicemembers learn the quirks of their organizations, chart their career paths, and get introductions to other leaders who can give their careers a boost.

“In every organization, there are unwritten rules about behavior and about what you need to do to get your agenda heard,” said Katherine Giscombe of Catalyst, a New York organization focused on advancing women in the workplace. “The more clued-in you are, the more successful you’re going to be.”

But while junior men are often able to find senior leaders to take them under their wings, for women, it’s harder.

“Soldiers and officers are often told: ‘Get a mentor,’” said Ellen Haring, a retired Army colonel who now directs the Combat Integration Initiative at Women in International Security in Washington. “But then women look around, and there are no senior women (in their lanes), and men are afraid to mentor them for fear they’ll be accused of having an inappropriate relationship.”

New groups are emerging to fill that gap. A website called West Point Women connects alumna from the military academy, while Facebook provides a home for nchapters of a group called Beauties in Boots. Col. Cricket Ryan, another founder of the Resolute Support group, helped create an organization similar to Sisters in Arms, called INSPIRE, at her previous posting with the 25th Air Force in San Antonio, Texas. Col. Claire Cuccio, another Kabul founder, organized a mentoring group at Fort Shafter in Hawaii.

The Resolute Support group began in October. Many of the gatherings are informal, but in March, the group organized a panel on succeeding in the military, and in November, the group hosted a talk by Sen. Joni Ernst, R-Iowa, an Army National Guard veteran who served in the Iraq War.

Besides giving general advice about how to build a career, Sisters in Arms also addresses the unique challenges women face, such as subtle, even if unconscious, forms of disrespect: having ideas ignored only to have the same idea adopted when a male colleague presents it, or not being viewed by subordinates as having the same authority as male peers.

Experiences like these can make women question themselves, Ryan said. Women think, “Maybe I heard that wrong. Maybe it’s just me.”

A group like Sisters in Arms provides a place where women can realize “you’re not crazy; you didn’t mishear that person,” Ryan said. And more-senior women can give younger ones tips on how to navigate these situations. “We can just be seen as another resource,” she said.

The group, which has the support of top NATO commander U.S. Gen. John Nicholson and the alliance’s senior enlisted leader, Command Sgt. Major David Clark, has also created a network for women.

Lt. Col. Jodi Bonnes said she ran into a dead end while trying to get a senior male officer to deal with inappropriate behavior by some U.S. troops. After she reached out to a Sisters in Arms colleague, that woman used her own network to get the issue addressed.

While it was founded by American officers, the group is open to all women at Resolute Support, civilians as well as military, along with troops from coalition nations.

Capt. Stephanie Sheldon, a Resolute Support staffer and one of the first female combat engineering officers in the Australian army, said seeing high-ranking women and hearing their stories is helping her believe she can reach the top in her own military.

By “sharing their experiences and giving that insight into how they got to the positions they have,” Sheldon said, she now sees “it’s well and truly achievable.”

Given that women leave the military at higher rates than men, that’s an important side effect that benefits not just servicemembers but the military as a whole, said Dr. Nancy O’Reilly, of WomenConnect4Good, another organization focused on women’s advancement.

“There’s a lot of competition out there for talent,” she said. Private companies constantly seek to poach star performers. Organizations that actively develop their people stand a better chance of keeping them, O’Reilly said.

As much as younger women benefit from groups like Sisters in Arms, senior women are finding meaning in encouraging the upcoming generation.

“I joined the military back in the 1970s when ... they did not necessarily embrace females,” said Sandra Cousin, who served 24 years and is now a civilian with the Defense Logistics Agency in Kabul. Younger members of Sisters in Arms often seek her advice.

“Others paved the way for us,” Cousin said. “I feel as though I have that opportunity to pave the way for others.”