Kabul on the edge 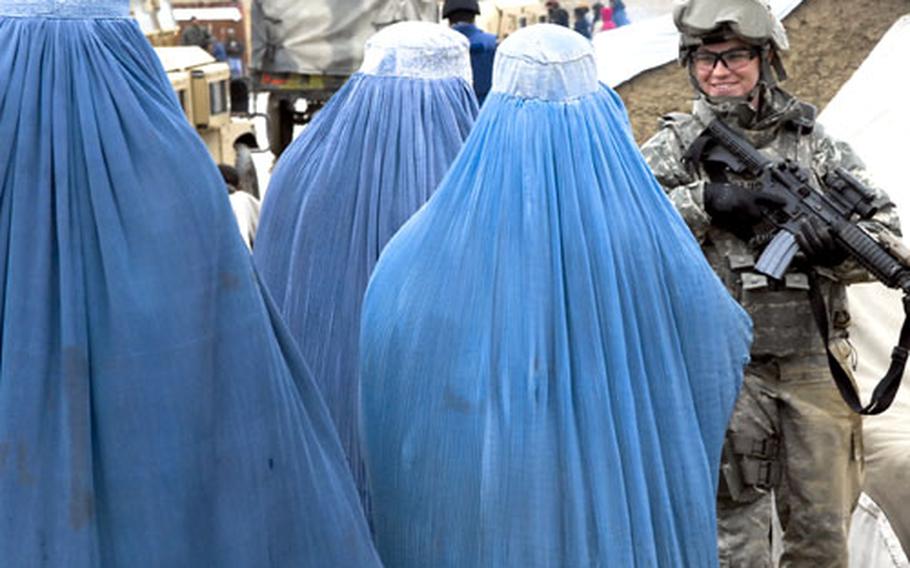 A member of the U.S. Army&#39;s Police Mentor Team - Kabul smiles to passing women at a refugee camp in the capital. Though many women in Kabul wear Burqas, the dress code is far more relaxed than in rural parts of Afghanistan, and at least as many don&#39;t. (Michael Gisick / S&S)

A member of the U.S. Army&#39;s Police Mentor Team - Kabul smiles to passing women at a refugee camp in the capital. Though many women in Kabul wear Burqas, the dress code is far more relaxed than in rural parts of Afghanistan, and at least as many don&#39;t. (Michael Gisick / S&S) 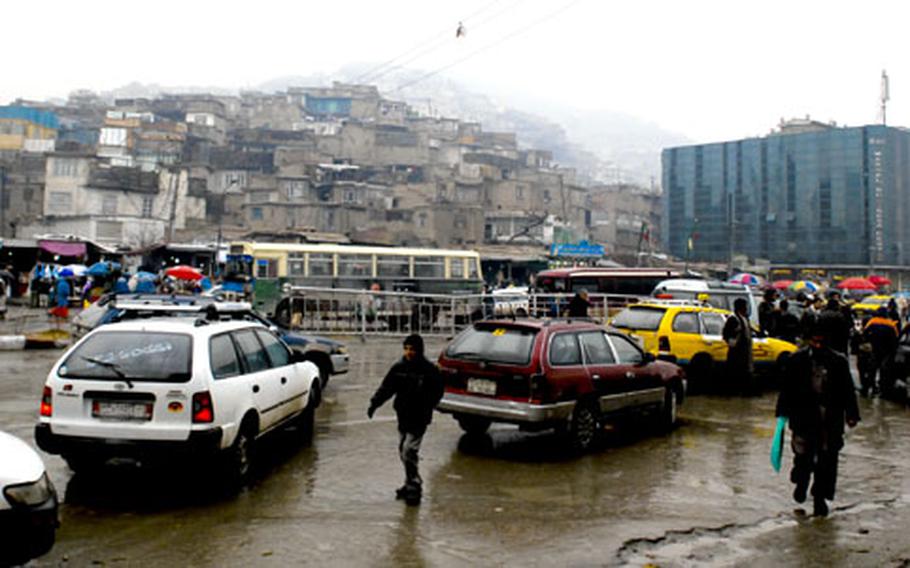 Despite an uptick in bombings over the past year, Kabul remains a bustling city. The sense of near-normalcy, however, can be deceptive, and many Kabulis express little optimism about their country&#39;s course. (Michael Gisick / S&S) 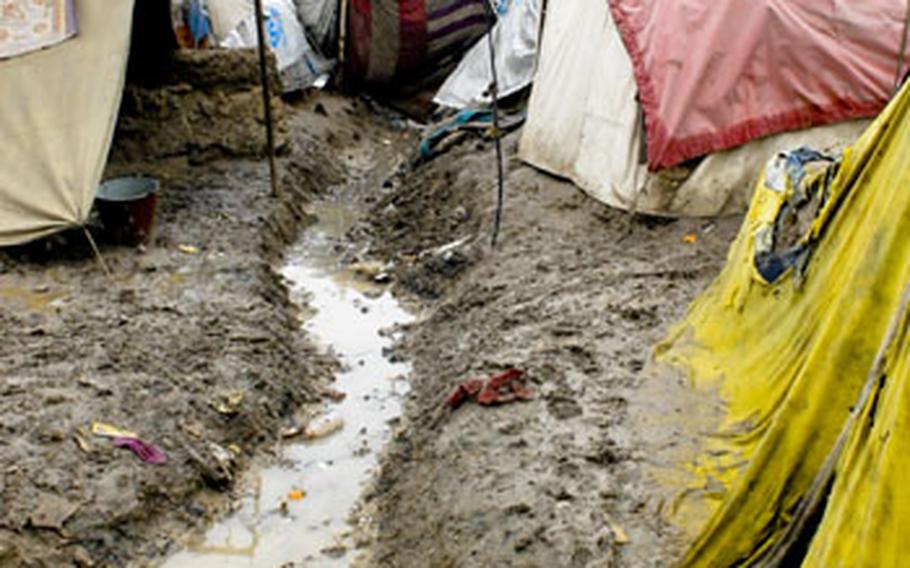 Thousands of people live in refugee camps in Kabul like this one, which mainly houses people who&#39;ve fled fighting in southern Afghanistan. (Michael Gisick / S&S) 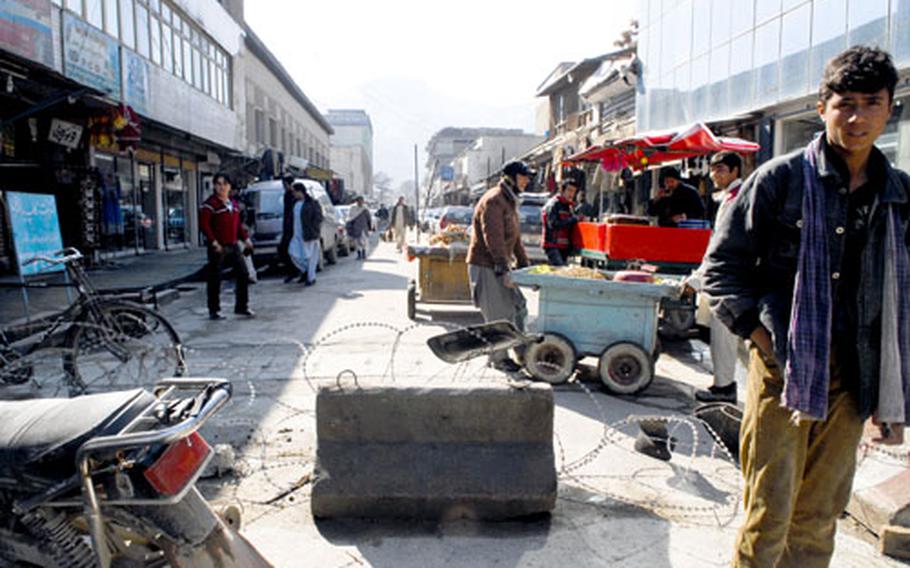 "Chicken Street" offers a more traditional selection of Afghan goods, mainly aimed at tourists — though few appeared to be in evidence during a visit in late January. Makeshift security barriers have been put up on the street. (Michael Gisick / S&S) 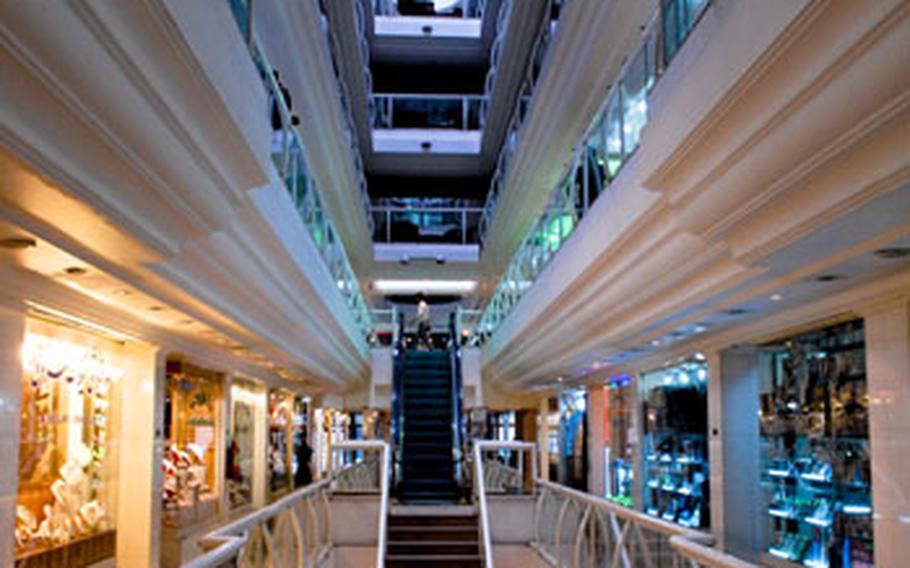 A gleaming mall in downtown Kabul offers shoppers everything from designer clothes to laptops. The mall stands in stark contrast to other areas of Kabul — and Afghanistan as a whole. (Michael Gisick / S&S)

KABUL, Afghanistan &#8212; To many in the Afghan capital, there&#8217;s an obvious explanation for the dramatic re-emergence of the Taliban &#8212; a force that seemed thoroughly dust-binned after the arrival of the world&#8217;s most powerful army seven years ago.

"Now," as one 23-year-old Kabul shopkeeper, Qand Mohmadi, put it, "we think America is supporting both the Taliban and the Afghan government. That&#8217;s what everyone says."

Indeed, the rumor of U.S. support for the Taliban is virtually ubiquitous in Kabul. And absurd as it might sound after a year in which American and other Western troops suffered record casualties in fighting with insurgents, many Kabul residents say they see at least a kernel of truth in the story.

"We don&#8217;t know for sure why they are doing it," said Daoud Zadran, a middle-aged real estate broker. "Politics is bigger than our thoughts. But maybe America wants to build up the Taliban so they have an excuse to remain in Afghanistan because of the Iranian issue."

Byzantine political conspiracy theories are nothing new in a region with little tradition of transparent government and where the arrival of international troops in 2001 was preceded by a long history of shadowy meddling by Western powers.

Still, the emergence of the rumor in what is easily Afghanistan&#8217;s most prosperous and best-educated city reflects a growing sense that the country is again sliding into chaos.

A public opinion survey released this month underscored plummeting public confidence in Afghanistan. Just 40 percent of those surveyed said they felt the country was heading in the right direction, down from 77 percent in 2005. Only 32 percent of Afghans said the U.S. was doing a good job in the country, compared to 68 percent three years ago, according to the poll.

The poll, conducted by ABC News, the BBC and ARD German TV, also showed falling support for the government of Afghan President Hamid Karzai. In 2005, 80 percent of Afghans said they supported the Karzai regime, but just 49 percent say the same thing now.

Meanwhile, a coordinated assault by Taliban gunmen and bombers that left at least 20 dead in Kabul on Wednesday again demonstrated that insurgents have been able to pierce the capital&#8217;s relative calm.

"People see that America is so strong and they wonder &#8212; why can&#8217;t it wipe out the Taliban?" said Col. Najeeb Ullah Samsour, one of Kabul&#8217;s district police chiefs, though he added that he personally gave little credence to the rumor of U.S. support for the insurgents.

"People are saying that for six or seven years we have all these international troops, but everything is getting worse &#8230; security, the economy, everything. So they think America must be supporting the Taliban."

Security in Kabul remains ahead of most of the country, with the insurgency strongest in the south and the east.

"I think people feel they&#8217;re pretty secure in the city," said U.S. Army Col. Chris Morgan, commander of Afghan Regional Security Integration Command&#8212;Kabul. "But nowhere in Afghanistan is completely safe, and you don&#8217;t have to go far outside Kabul to feel some tension."

According to a study released in December by an influential British think tank, three of the four major routes leading to Kabul have been "compromised" by the Taliban, "closing a noose around the city and establishing bases close to the city from which to launch attacks inside it."

The report, by the International Council on Security and Development, charted a dramatic rise in Kabul attacks, including kidnapping of Afghans and foreigners, bomb attacks and assassinations.

In recent interviews with Kabul residents, many blamed the lack of progress on Karzai, who is seen as increasingly weak and isolated ahead of this year&#8217;s planned presidential elections.

"I see no positive progress since the beginning of the Karzai government, even though we have support from all these other countries," said one resident, Habib Rahman. "We see hundreds of promises every night on the TV, but we see nothing in reality."

From a tarp-covered stall on a street corner, Mohmadi said he too saw little progress.

Many blamed corruption, with some seeing the U.S. or at least western companies in league with pilfering Afghan officials.

"This government is so corrupt that if Osama bin Laden and Mullah Omar were crossing the street together right outside, no one would call the police because they know the police would just take a bribe to let them go," Rahman said.

But there&#8217;s also another theory about bin Laden.

"A lot of people say that Osama is really from America," said Nasrallah Wazidi, shrugging noncommittally. "They say he&#8217;s just playing a role like a movie star."