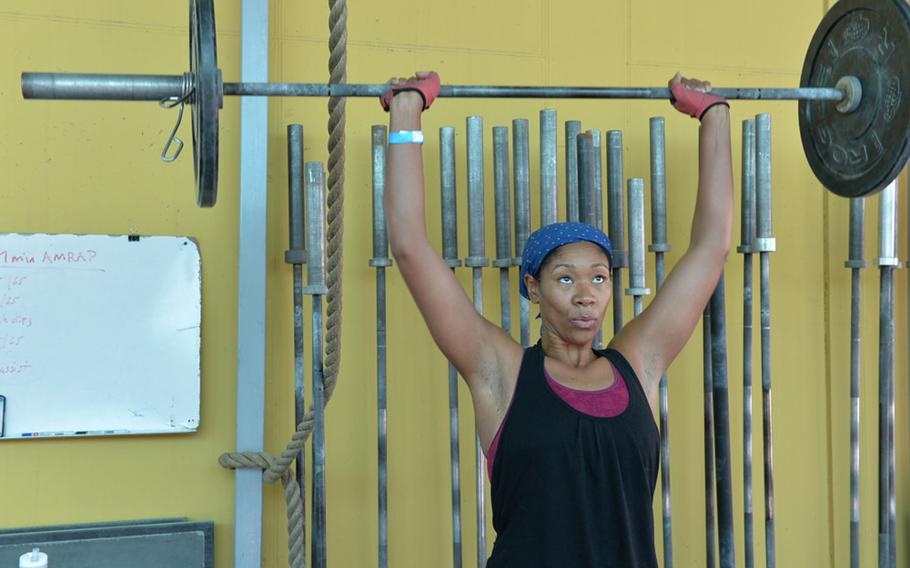 Virsa Perkins performs a push press, part of a CrossFit workout challenge during the Kabul Fitness Festival on May 27, 2016, at the U.S. Embassy in the Afghan capital. Fitness is one way embassy workers cope with the stress of being confined to a small compound in a high-threat environment. (Chad Garland/Stars and Stripes)

Virsa Perkins performs a push press, part of a CrossFit workout challenge during the Kabul Fitness Festival on May 27, 2016, at the U.S. Embassy in the Afghan capital. Fitness is one way embassy workers cope with the stress of being confined to a small compound in a high-threat environment. (Chad Garland/Stars and Stripes) Ryan Rosa takes a breather during a high-intensity CrossFit workout, part of the Kabul Fitness Festival at the U.S. Embassy in the Afghan capital, on May 27, 2016. Though the main embassy compound is smaller than about five Manhattan blocks, it has several fitness facilities and daily classes to help embassy workers get in shape and fight the pressures of serving a diplomatic mission in a war zone. (Chad Garland/Stars and Stripes) 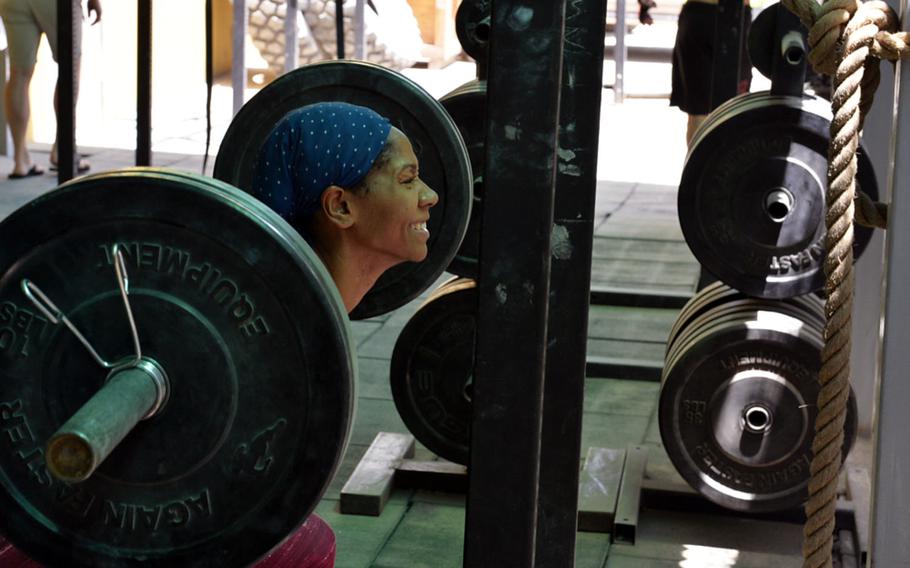 Virsa Perkins, seen here performing a back squat during a CrossFit workout challenge during the Kabul Fitness Festival at the U.S. Embassy in the Afghan capital on May 27, 2016, said she started the high-intensity fitness regimen in April to cope with the stress of being posted to a war zone. About 200 people participated in the four-day fitness event, which featured dozens of sports and fitness activities. (Chad Garland/Stars and Stripes) A U.S. Special Forces soldier performs a pull-up during a fitness event at the four-day Kabul Fitness Festival at the U.S. Embassy in the Afghan capital on May 27, 2016. More than 200 people - including servicemembers, State Department employees and contractors - participated in the four-day fitness event. (Chad Garland/Stars and Stripes) Ryan Rosa performs a push press as part of a fitness challenge during the Kabul Fitness Festival at the U.S. Embassy in the Afghan capital on May 27, 2016. Rosa, a Marine veteran and embassy employee, said he has made strength gains while in Kabul, where fitness is one of few outlets embassy staff have on the small, secure compound to which they're confined. (Chad Garland/Stars and Stripes) 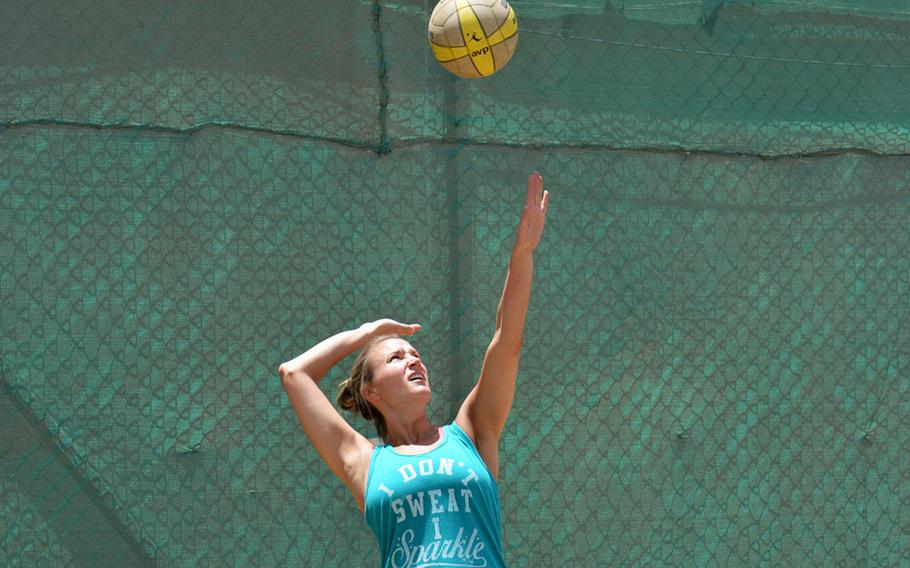 Lynn Walroth serves during a volleyball tournament at the U.S. Embassy in Kabul, May 28, 2016, part of a four-day fitness festival meant to encourage embassy workers to stay active and achieve their fitness goals. (Chad Garland/Stars and Stripes) Workers at the U.S. Embassy in Kabul, pictured here playing volleyball during the Kabul Fitness Festival at the main embassy compound on May 28, 2016, organize frequent group fitness events and classes to stay fit and ward off the stresses of a war-zone posting. (Chad Garland/Stars and Stripes) 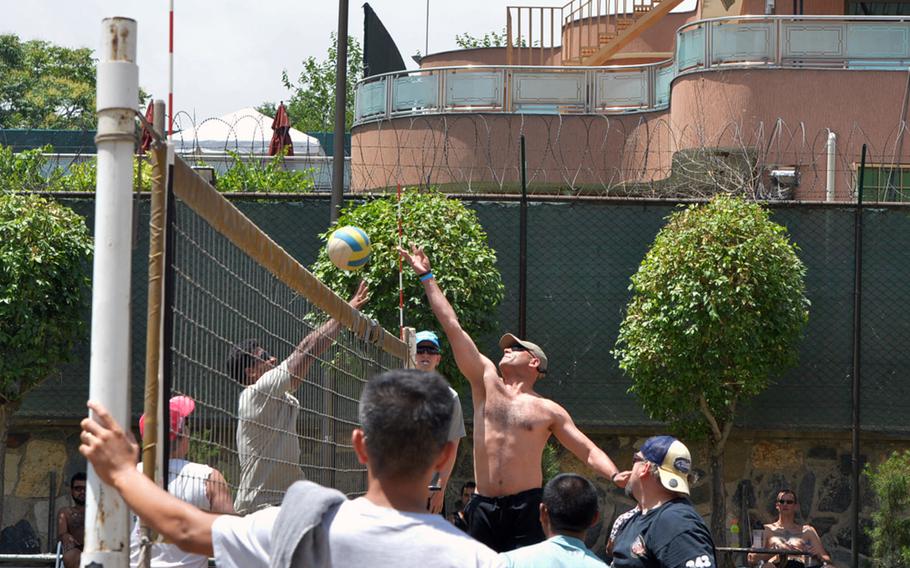 Volleyball is a popular fitness activity at the U.S. Embassy in Kabul. Workers are seen here playing a game on the sand volleyball court at the embassy on May 28, 2016, during the four-day Kabul Fitness Festival in which about 200 people participated. (Chad Garland/Stars and Stripes) 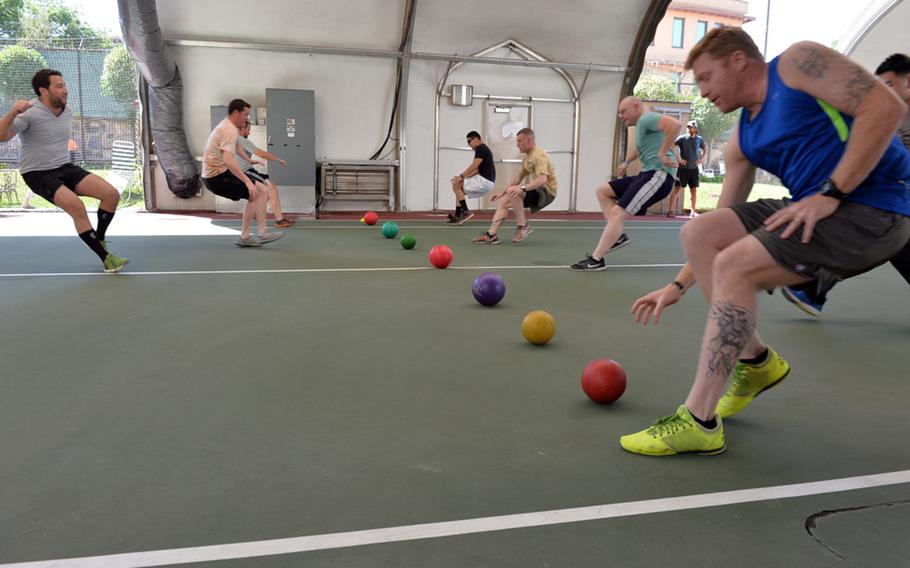 A dodge ball tournament during the Kabul Fitness Festival at the U.S. Embassy in the Afghan capital on May 28, 2016, pitted groups of embassy workers and military servicemembers against one another, like these U.S. Agency for International Development employees and U.S. Marines. (Chad Garland/Stars and Stripes) Constantina Williamson plays dodge ball on a team of women representing the Regional Security Office at the U.S. Embassy in Kabul, May 28, 2016. (Chad Garland/Stars and Stripes)

Fitness classes are abundant, and though the main compound has limited space, the embassy boasts a number of workout facilities. Exercise is a key way employees cope with the stress of a war-zone post and separation from family, officials said.

But fitness doesn’t come easily for everyone. John Collins, an embassy employee, said he gained 12 pounds in his first 30 days at the post last fall, thanks to daily sodas and ice cream deserts — his way of dealing with separation from his family.

Weight gain is one of the risks of a hardship post like Kabul. Before being posted here or to other hardship posts, State Department employees are warned that they’ll likely fall into one of four categories: hunk, chunk, monk or drunk. The long hours and war environment, in other words, will cause them to seek comfort in fitness, food, isolation or alcohol.

“It’s so true,” said embassy employee Virsa Perkins. She said she started high-intensity CrossFit workouts in April, “so the stresses of Afghanistan don’t get to me.”

She was one of several embassy employees, military servicemembers and contractors who took part in the Kabul Fitness Festival — a slate of dozens of athletic activities on the compound over Memorial Day weekend.

Collins, who took part in the festival’s opening ceremony, said he attempted to work out when he arrived in Kabul, but his initial efforts were inconsistent. “They try to do a lot here,” he said. “I think (the challenge is) trying to find the motivation.”

Though not as austere as many military bases in Afghanistan, the main compound in Kabul is one of three high-threat embassies where the State Department deems living conditions stressful enough to warrant extra coping resources.

Social workers are embedded at embassies in Kabul, Baghdad and Islamabad to help people manage the unique pressures of living in war-zone environments. In Kabul, they offer individual counseling, stress-management workshops, wellness programs and other tailored services.

Some of the stresses for the roughly 1,700 people based at the embassy are seclusion and close quarters, officials said. Not only are they far from home, but people work and live together in a compound smaller than about five Manhattan blocks.

Opportunities to leave the facility are few. Private trips outside the compound require several days’ notice to arrange for security details to scout and clear the location. Embassy staffers are then accompanied by armed guards riding in armored vehicles who secure the perimeter during the visit.

“It’s like an island,” said Basia Yeziorna, one of two social workers at the Kabul embassy. It’s unique from most other posts, where Foreign Service officers are able to come and go more easily to see the country they’re serving in, to meet locals and to conduct the work of diplomacy.

While exercise can’t change the environment, “it kind of changes your state of mind,” said her colleague Theresa Johnson, adding that its biochemical effects improve mood. “Exercise is actually a whole complement of coping strategies.”

It helps people build or replenish resilience, or the ability to cope with stress, she said. Other strategies, such as heavy eating, drinking or isolation, can deplete a person’s resilience resources if overindulged.

People don’t start bad habits in Kabul, the social workers said; they typically arrive with an existing tendency that gets worse.

But many commit to countering their weaknesses by focusing on fitness goals. There are several workout options available here, including a tennis court, a gym with weight and cardio machines, a volleyball court and a swimming pool. In May, no fewer than three fitness classes were offered any day of the week.

Johnson, who’s lost 30 pounds in Kabul, attends Zumba classes. They proved so popular, attracting servicemembers from the adjoining NATO base, that a second session had to be added.

Besides boosting mood and improving physical heath, exercise is often a way for people to form supportive social groups outside work, Yeziorna said. While there are many sources of support in the U.S. and other posts, “here we really just have the job,” she added.

Collins said he became consistent in his fitness efforts in January through “positive peer pressure” from a friend with whom he started going to the gym on a daily basis.

About the same time, he and his friend began participating in a Saturday morning fitness club and running events organized by Robin Martz, a U.S. Agency for International Development employee who runs triathlons, and Maria Amaya, a security officer who runs ultramarathons.

Martz and Amaya, who also organized the fitness festival, started the groups to help people achieve their New Year’s resolutions, build community and “forget where they’re at,” Amaya said.