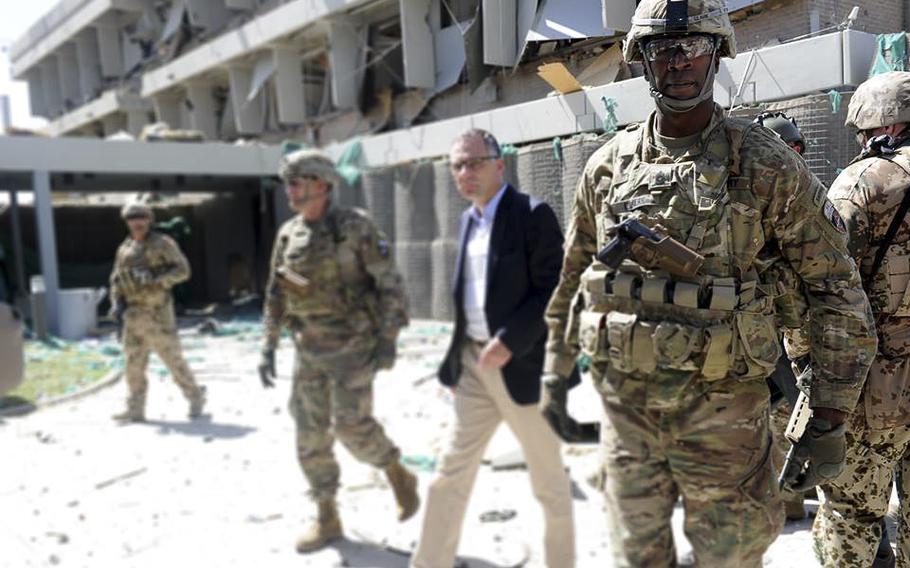 Military personnel are seen at the site of the May 31, 2017, suicide bombing that killed scores of people and wounded hundreds more. On Friday, June 2, Afghan police fired warning shots and fought a running battle with angry anti-government protesters. (Resolute Support Mission/Facebook)

KABUL, Afghanistan — Afghan police fired warning shots and fought a running battle with angry anti-government protesters on Friday, two days after one of the deadliest terrorist attacks since 2001.

Hundreds of people had gathered to demand justice for the victims of the bombing, in which a sewage truck packed with explosives blew up early Wednesday on the edge of the city’s heavily fortified “green zone,” where diplomatic and government buildings are concentrated. The blast killed at least 90 people — including Afghan guards at a U.S. Embassy facility — and injured hundreds more.

Friday’s demonstration was televised live. Riot police were seen beating and arresting protesters as they approached the site of the blast and the nearby presidential palace. Police fired shots into the air and launched tear gas grenades to disperse the crowd.

The Associated Press reported that several people were killed or injured, but this could not be independently confirmed.

Deputy Interior Minister Gen. Murad Ali Murad said that both the police and protesters suffered casualties but could not provide more details. “Some people with guns who had their own goals were seen amongst the demonstrators,” he said.

The demonstrators called for the resignation of Afghan President Ashraf Ghani and Chief Executive Abdullah Abdullah, chanting that they had failed to fulfill promises of improving security.

The protesters also called for the execution of Haqqani network prisoners. Though no group has yet claimed credit for the attack, Afghan officials have blamed the extreme wing of the Taliban, who they claim was aided by Pakistan’s intelligence agency.

“These professional terrorists have once again showed that they are not representatives of any religion and they commit such acts only to make their Pakistani masters happy,” Afghanistan’s intelligence agency said in a statement after the blast.

Afghan officials have long charged Pakistan with aiding the Haqqanis, allegations that Pakistan has repeatedly denied.

In a late-night televised address after the bombing, Ghani reaffirmed his commitment to reaching a peace settlement with the Taliban, which he had made a key goal of his presidency, and called on insurgents to “end their fighting against the Afghan nation and solve disagreements through dialogue.”

He also warned that Afghan forces were being given new powers to act against those who continued to fight, the presidential palace said in a statement. He said the attack showed that terrorists could not win a conventional war, and were facing increasingly strong Afghan forces.

The address seems to echo Ghani’s pledge to get tougher on Taliban insurgents last spring, after a complex attack on the National Directorate of Security that killed nearly 70 people and left about 350 wounded in April 2016.

Public outrage over that attack led to tough talk from the president, who all but abandoned efforts to bring the insurgent group to the peace table. He promised instead to beat them on the battlefield. The following month, the government executed six Taliban prisoners convicted of carrying out high-profile terrorist attacks.

The latest protest comes as the war against the insurgents has stalled, as the group now holds or influences more territory than it has since the U.S. toppled its regime in 2001. President Donald Trump’s administration is considering plans to increase the U.S. presence in the country to shift the balance in America’s longest war.

The Taliban on Wednesday had denied responsibility for the attack, possibly because of the civilian death toll. The insurgents often claim they seek to minimize civilian casualties and only target the Kabul government and its foreign backers.

U.S. officials have made it a priority this year to defeat the small Islamic State faction, which has established a foothold in eastern Afghanistan and has claimed some of the deadliest high-profile attacks in Kabul in recent months.

An ISIS raid on a military hospital in March killed at least 30 people. Earlier in May, the group claimed responsibility for an attack targeting NATO troops near not far from the site of Wednesday’s bombing.