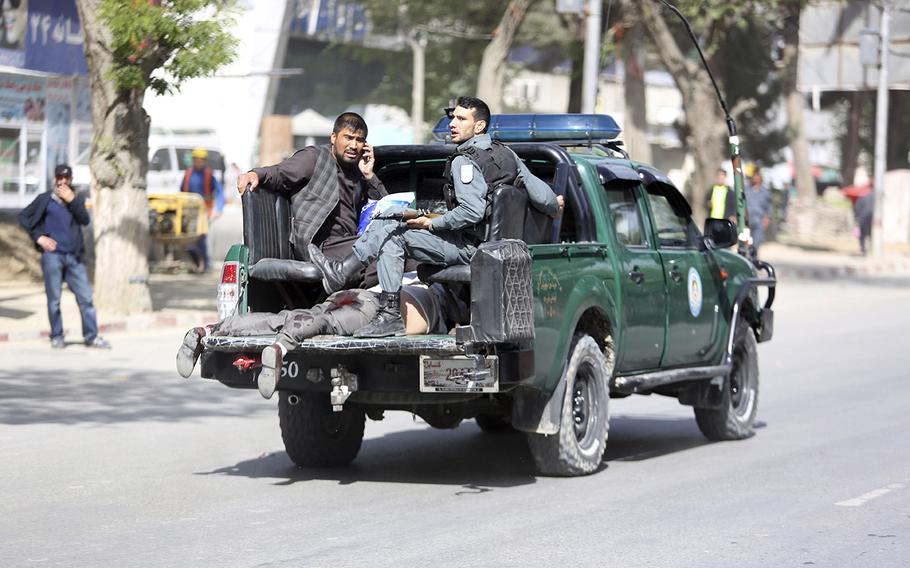 The local Islamic State affiliate claimed responsibility for the Kabul blasts, the first of which occurred just before 8 a.m. just outside the Green Zone, near the National Directorate of Security, Afghanistan’s top intelligence agency.

“It was a suicide attacker riding a motor bike,” Interior Ministry spokesman Najib Danish told Stars and Stripes. “A half-hour later there was a second attack nearby, where a number of journalists and some civilians had gathered to help the victims.”

Danish said the second attacker was disguised as a journalist and caused most of the casualties.

Kabul police spokesman Hashmat Stanikzai, who was at the scene, said that the 25 fatalities included civilians and four police officers. Wahid Majrouh, a Health Ministry spokesman, put the death toll lower, at 22.

Deputy police spokesman Matiullah Helal said the blast killed 11 children who were studying in a nearby mosque and that Romanian soldiers were among the injured.

All the wounded troops were in stable condition and taken to Kandahar Air Field’s hospital for treatment, NATO said in a statement.

The Agence France-Presse news agency reported that its photojournalist, Shah Marai, was killed in the Kabul attacks. Eight other journalists were also reported dead. Officials said more than 40 people were wounded.

“We condemn in the strongest terms possible the cowardly attacks in Kabul today by two suicide bombers that killed and injured Afghan forces and innocent Afghan citizens, including Afghan journalists,” America’s top commander in Afghanistan, Army Gen. John Nicholson, said in a statement.

“We stand with our Afghan partners in defeating those who would threaten the people of this country, whose cries for peace are being ignored.”

The last major attack in Kabul, last week, was also carried out by an ISIS suicide bomber, who blew himself up near a voting registration center, killing 60 predominately Shiite Muslims.

After increased pressure from Afghan and U.S. forces in the provinces, the Taliban, too, appear to have shifted tactics to attacking Kabul.

The group announced a new spring offensive on Wednesday. That followed an unusually intense period of violence in the capital over the winter months, which has stoked concerns that the city could see a particularly bloody summer.

In response to the increasing insecurity, Nicholson said in March that protecting Kabul was his primary focus.