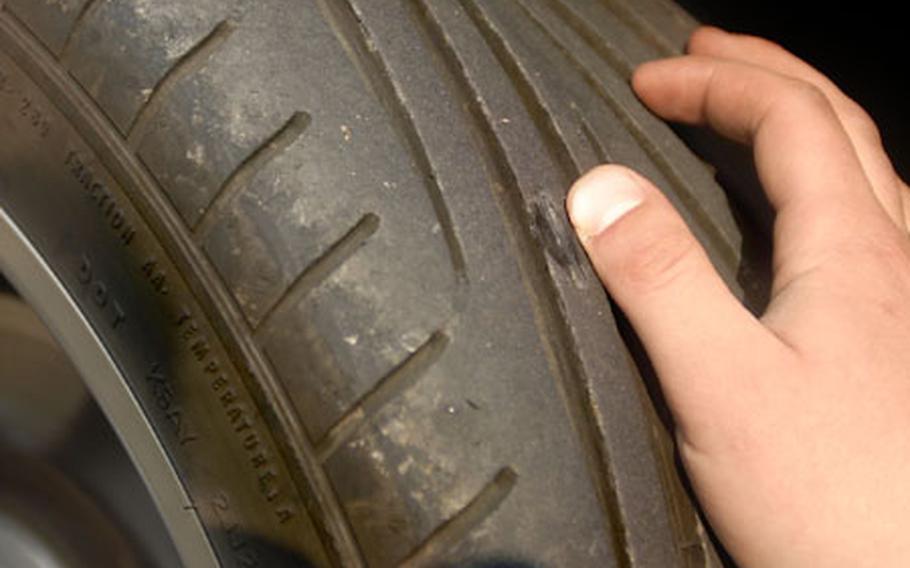 Spc. Derrik Mullin from the 5th Maintenance Company shows the tire damage (to the left of his thumb) he said he sustained by driving over the tire shredders at Rhine Ordnance Barracks in Kaiserslautern, Germany. The shredders, designed as a force protection device, have become common on military installations overseas. (Ben Bloker / S&S)

KAISERSLAUTERN, Germany &#8212; Soldiers say newly installed tire shredders used to protect base gates in Kaiserslautern are mistakenly tearing out chunks of rubber from their car tires.

Spc. Derrik Mullin noticed the damage to his tires when he went to wash his 1989 Chrysler Daytona. He found the small cuts in his tires after workers put in the shredders at Rhine Ordnance Barracks.

The Army lowered the spikes at four bases after engineers noticed earlier this month that one of the strips wasn&#8217;t working properly, said Jeffrey Crisp, deputy plans and operations officer for Army Garrison Kaiserslautern.

Engineers began installing the shredders in the base exit lanes on March 8 as part of an effort to boost force protection. They were lowered several days later, but some soldiers said the damage has already been done and it is so bad that it is a safety issue.

Spc. Dustin Watts, a vehicle mechanic, said the tires on his 2006 Audi have quarter-inch pieces ripped out. He said the spikes ripped an inch-long piece of tread off one of his tires.

The damage is severe enough he is leery about traveling too far.

Sgt. 1st Class Esrun Edwards, a platoon sergeant with 5th Maintenance Company, said he understands the need for the shredders, but they should work properly. He has dime-size chunks missing from the tires of his 2005 BMW 525.

The military has instructed motorists to drive straight and slowly over the shredders to avoid possible damage.

Similar shredders have been installed at Army and Air Force bases throughout Europe. In 2005, similar devices at Aviano Air Base in Italy damaged 2,600 vehicles, prompting massive tire assessments and briefings for those who wanted to file claims. Several hundred Navy personnel also reported damage at bases in Naples, Italy. People had up to two years to file a claim.

It was uncertain Friday whether soldiers would get compensated for the damage, but Crisp said anyone who suspects their tires were damaged by the shredders should contact the Army claims office.

The Army has contacted the U.S.-based manufacturer to see if there is a defect in the devices. In the meantime, the shredder spikes will remain locked down.