Sgt. Sherene Knight and Master Sgt. Justin Chandler speak to students at the Marine table at Thursday night’s college fair. All four branches of the military were present and were some of the busiest tables throughout the night. (Chris Miles / S&S)

Sgt. Sherene Knight and Master Sgt. Justin Chandler speak to students at the Marine table at Thursday night’s college fair. All four branches of the military were present and were some of the busiest tables throughout the night. (Chris Miles / S&S) 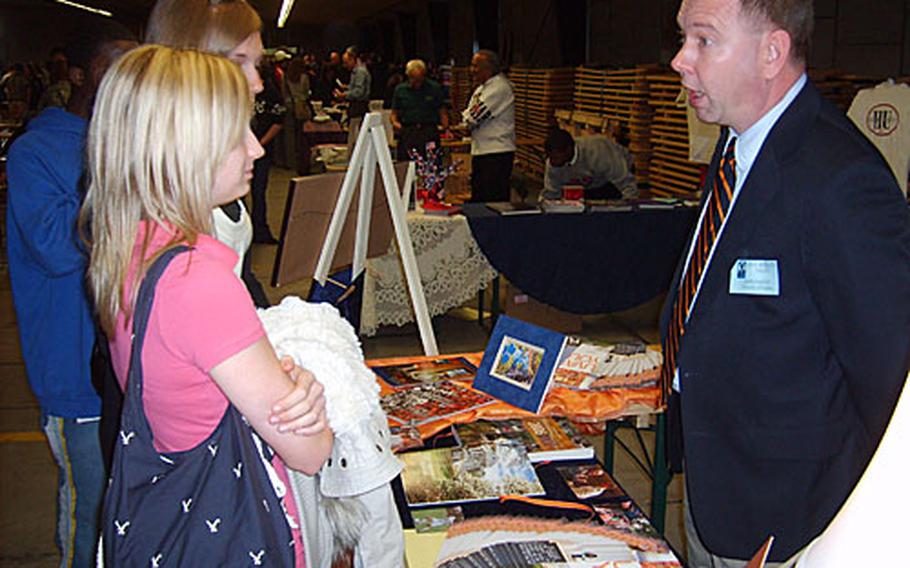 Bitburg High School sophomore Erika Feldhausen speaks with Tech Sgt. James Bartelt of Ramstein, who represented the University of Virginia at Kaiserslautern&#39;s college fair on Thursday. Feldhausen said about 50 students made the trip from Bitburg to attend the fair, which had representatives from 95 colleges and universities. (Chris Miles / S&S) 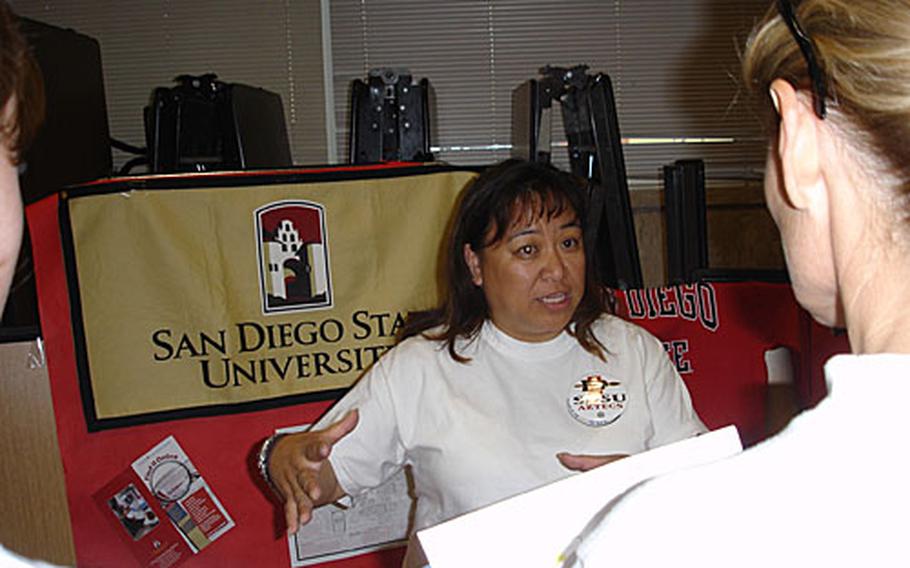 American high school students across Europe took advantage of two programs Thursday night to learn more about the colleges and universities they could soon be attending.

Students from around Germany, the Netherlands and Luxembourg gathered in Kaiserslautern, Germany, for the opportunity to speak with 95 representatives from colleges and universities from both the U.S. and Europe, as well as recruiters from all branches of the military.

At the same time, several hundred students, parents and faculty crowded into the cafeteria at Naples High School in Italy to meet with representatives from about 15 American colleges.

The Kaiserslautern fair is the biggest of its kind, according to Larry Zani, a community organizer for the event. This year&#8217;s fair, the 15th annual, was so large that it was moved to the Rhine Ordnance Barracks warehouse.

Zani said that about 1,250 students and their families from 13 different schools participated.

Erika Feldhausen, a sophomore from Bitburg High School, said she and about 50 people made the hour drive to Kaiserslautern to attend the fair.

&#8220;I believe it will really help kids learn about college and give them a drive and excitement for it,&#8221; he said.

Most college and university tables were staffed by volunteers from the Kaiserslautern community, many of them alumni of the schools they represented.

Peter Trembley of the Logistics Readiness Squadron in Ramstein said he heard about the event a month ago and signed up to be a spokesman for his alma mater, the University of Massachusetts at Amherst. He contacted the school and it sent him material and pamphlets.

&#8220;I got everything from general information to financial aid and applications, all the main things people ask about,&#8221; Trembley said.

Most of the people staffing tables at Naples were also from the community &#8212; people who took time out of their schedule to help students learn more about their options.

&#8220;Our students can&#8217;t really visit the colleges in the States, so we bring the colleges to them,&#8221; said Daisy Weddle, the assistant principal at Naples High.

Students and parents picked up catalogs, applications and information packets on course requirements and scholarships.

&#8220;This was very beneficial for us,&#8221; said Jill Singleton, whose daughter is a senior at Naples. &#8220;With so many college representatives, there was information available for almost any area of study our kids might be interested in.&#8221;

As of Thursday, about 31 percent of the Naples seniors had already completed their college applications, according to Joseph Mee, the high school&#8217;s senior academic/career guidance counselor, who coordinated the event and represented the University of Connecticut.