K-town mall to be one of military's largest exchanges An artist&#39;s rendering of the new Kaiserslautern Military Community Center being built at Ramstein Air Base, Germany. (Courtesy of U.S. Air Force)

An artist&#39;s rendering of the new Kaiserslautern Military Community Center being built at Ramstein Air Base, Germany. (Courtesy of U.S. Air Force) 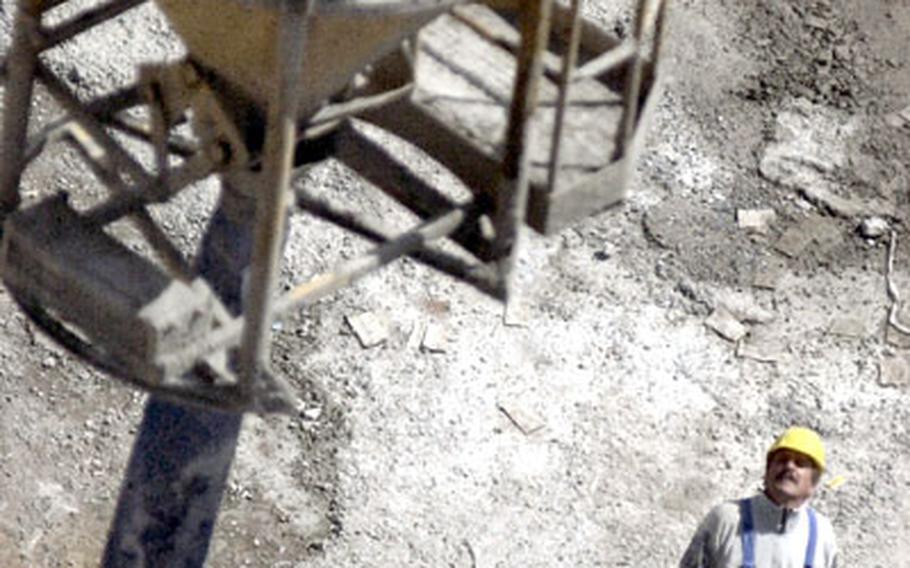 A construction worker at the Kaiserslautern Community Center mall and hotel construction site waits for an empty concrete bucket hoisted by a crane to come down Monday at Ramstein Air Base, Germany. (Scott Schonauer / S&S)

RAMSTEIN AIR BASE, Germany &#8212; While concrete for the Kaiserslautern military community&#8217;s mall and hotel complex continues to pour, visitors don&#8217;t need the imagination of Walt Disney to envision its enormity.

This 844,000-square-foot military shopping destination isn&#8217;t going to be your father&#8217;s base exchange. It has spacious walkways lit by skylights, a multiplex theater with afternoon matinees, an electronics store that could rival Circuit City, nine eateries and a 350-room hotel that stretches more than eight stories into the sky.

All on a military base in western Germany?

The flight line bustling with Air Force aircraft says it is true, but there is nothing close to anything like this in the military.

Leslie Whitlock, the Army and Air Force Exchange Service&#8217;s project manager, calls the complex &#8212; dubbed the Kaiserslautern Military Community Center &#8212; a smaller version of the Mall of America in Minnesota or the Galleria in Dallas.

Private contractors officially broke ground in December, and the hotel and services portions of the facility are scheduled to be finished in spring and open for business in early summer, said Birgit Baldwin, deputy commander of the 435th Services Squadron. Workers hope to finish the retail side in August next year. The stores will be open in phases after construction is completed, Whitlock said.

Artist renderings and a model on display at the base exchange give shoppers a glimpse at the project.

Retail services at Ramstein and at nearby Vogelweh base will be consolidated into the sprawling complex with electronics, home and clothing sections. The Powerzone at Vogelweh will move to Ramstein, while the food court and a scaled-down exchange will remain at the Air Force base east down Autobahn 6.

At Ramstein, the mall&#8217;s main entrance opens up to a food court with fast-food-style eateries and a seating area with wireless Internet connections. The center also will have a cafe, a mega bookstore and a day spa.

&#8220;People coming here from Iraq are going to be able to come in, sleep, shop and go home,&#8221; said Jeff Noorda, the project manager for the 435th Civil Engineering Squadron.

In addition to the hotel and mall, the building will include a ticket and tours office, a sports lounge and a Macaroni Grill restaurant. An outdoor recreation center will provide equipment rental and a 25-foot climbing wall that can be seen from the mall.

A 2,700-plus space parking lot made with German stones to reduce storm water runoff will accommodate the thousands of visitors.

Dirt will be dumped on the roof of the building to grow grass. The &#8220;green roof&#8221; will absorb rainwater and reduce runoff, said Tom Cochran, command architect for U.S. Air Forces headquarters.