K-Town cow corralled after weeks on the lam 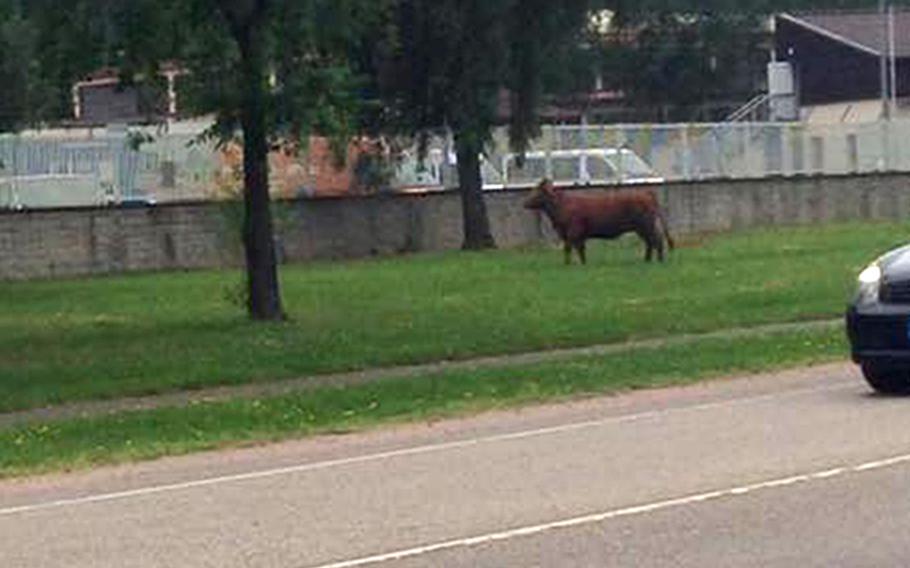 Opel security officers spotted the brown cow, named Johanna, on their surveillance camera about 3 a.m. near the train tracks on the factory’s property on the west side of Kaiserslautern, near the Opel traffic circle, police said.

The cow made one last escape after it dodged the company’s firefighters, who were called on to catch the elusive bovine.

With help from police and others, the cow was cornered without injury in a fenced area, where she was tranquilized and transported to her owner about three to four hours after she was initially seen, police and an Opel spokesman said.

Ruesselheim, an animal charity that rescues animals destined for slaughter, took custody of the cow from the owner on Tuesday, said Kaiserslautern police spokesman Wolfgang Denzer.

The group, which had planned to purchase the cow from the owner if it were found alive, had offered a reward to anyone catching the cow unharmed. It’s not known whether the guards who spotted the cow received any reward money.

Walter Hauck, a spokesman for the city’s public order department, said he was informed the reward was canceled but he did not know why. Such a reward could create a public problem if too many people were trying to find the cow, he suggested.

No one from the animal rights group could be reached for comment Tuesday afternoon.

Numerous public sightings of the cow were made since the animal was first reported missing nearly four weeks ago. Police followed up on leads, but the cow always disappeared by the time they arrived on scene, only to resurface somewhere else, officials said.

The charity said on its Facebook site Tuesday that Johanna was pastured at a farm in Emmelshausen, about 18 miles south of Koblenz. Those interested can contribute to the cow’s living costs, which are estimated to be about 120 euros a month (about $135). For more information, go to www.ruesselheim.com.