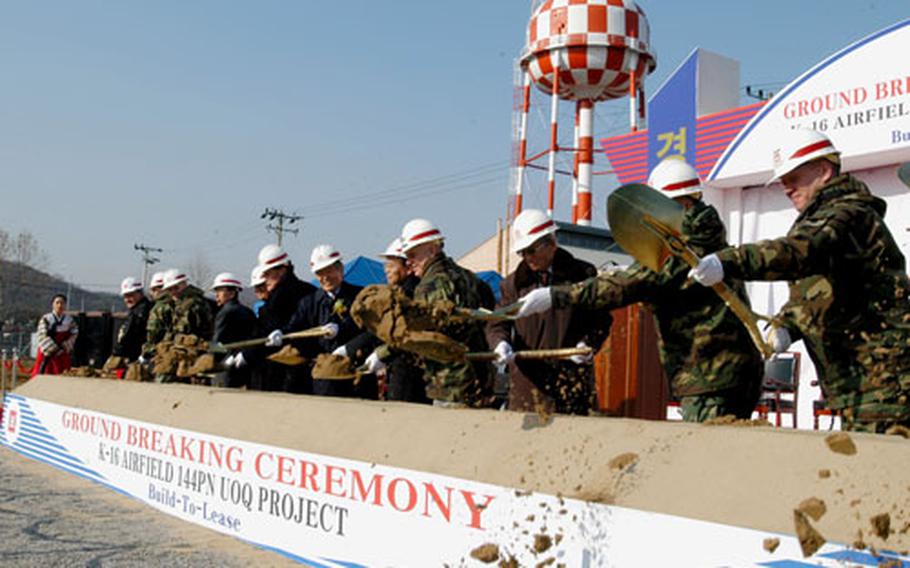 U.S. Forces Korea officials, Korean contractors and other dignitaries break ground on a new build-to-lease unaccompanied officers quarters at K-16 Air Base Friday. The privately built and owned barracks on base is a first for USFK. (Erik Slavin / S&S)

K-16 AIR BASE, South Korea &#8212; Officials broke ground Friday on a 144-unit unaccompanied officers quarters that the Army says could be a model for how it does business in the future.

Several top officers at the ceremony said the K-16 barracks is the first build-to-lease project for U.S. Forces Korea.

USFK will lease the privately owned and built project at $3.5 million annually for up to 15 years. The lease then will be renewable for another 15 years.

The lease cost includes maintenance but not furnishings or utilities.

Based on what the military currently spends on off-base housing, officials estimate the building will save $1.7 million per year.

Each unit will include a bedroom, living room, private bathroom and laundry area, officials said.

The new building will give soldiers more time by moving them closer to base, said Col. Ronald Stephens, Area II commander.

&#8220;Many of these soldiers commute to work every day, sometimes dealing with hours of bumper-to-bumper traffic,&#8221; Stephens said.

The deal required a lot of explanation along with a complex legal process on the Defense Department&#8217;s side.

Congress limits Defense Department leases to 15 years, which led to including the renewability clause after the initial 15-year period.

The Army Corps of Engineers will oversee the project. The building is expected to be ready for occupancy in July 2007.