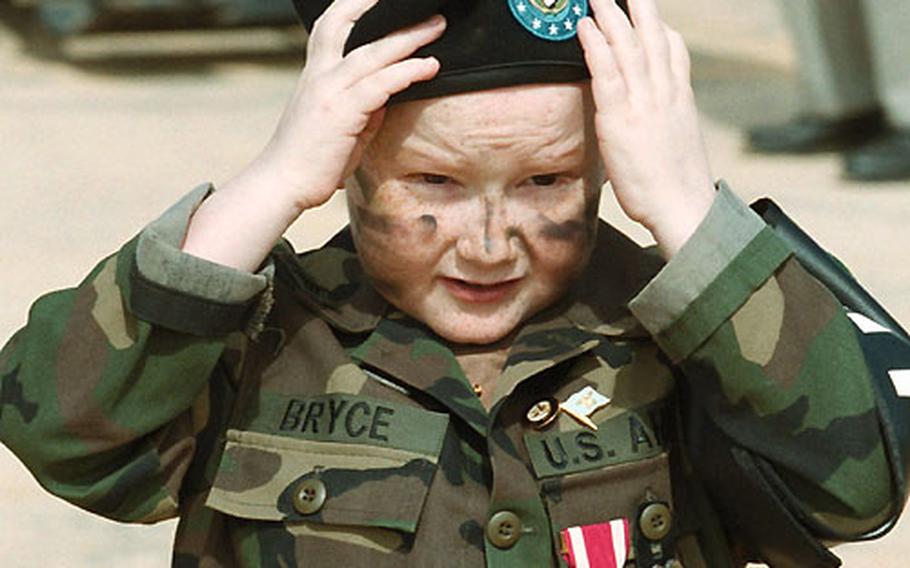 Justin Bryce, 10, adjusts his beret given to him by the Army. The Make-A-Wish Foundation helped the terminal cancer patient make his military wish a reality before his death on Christmas Day. (Paul Haring / Courtesy to S&S)

ARLINGTON, Va. &#8212; Most battles fought by U.S. soldiers are waged with bullets and bombs.

But the Army&#8217;s littlest sergeant, 10-year-old Justin Bryce, used different ammunition in his war against cancer: the love of his family, prayers from all corners of the country, and an implacable spirit that stayed fast to the end.

On Christmas Day, the 10-year-old warrior fought his last battle. Cancer took Justin&#8217;s body. But his spirit and courage touched the hearts of hundreds of people, inside and outside the Army.

Justin was promoted to his rank by Sgt. Major of the Army Jack Tilley at a special Pentagon ceremony Oct. 7.

The promotion was engineered by the Make-A-Wish foundation, which works to give children with fatal diseases their dying wishes.

After Justin was diagnosed with terminal cancer in August 2001, the foundation asked Justin to make a wish. Justin replied that he wanted to outrank his brother, Pvt. Raymond Bryce of 10th Mountain Division, Fort Drum, N.Y.

Defense Secretary Donald Rumsfeld approved the request, and Justin was granted his sergeant&#8217;s chevrons on Oct. 7.

Later this spring, Justin will be buried wearing his chevrons, correctly sewn onto a proper battle dress uniform complete with dog tags and black beret, Mary Bryce said. The uniform was a gift from Rumsfeld; the beret came from the Army.

Before his death, Justin was able to visit his brother at Fort Drum, where the young sergeant got a blue-ribbon reception, as well as travel to Fort Belvoir, Va.

The Bryce family held a memorial service for Justin on Dec. 29 in Greene, but another brother, Eric, asked his parents to defer the burial until Eric&#8217;s 12th birthday this spring, Mary Bryce said.

To read more about Justin Bryce, or to contact his family, go to: www.caringbridge.org/ny/justinbryce