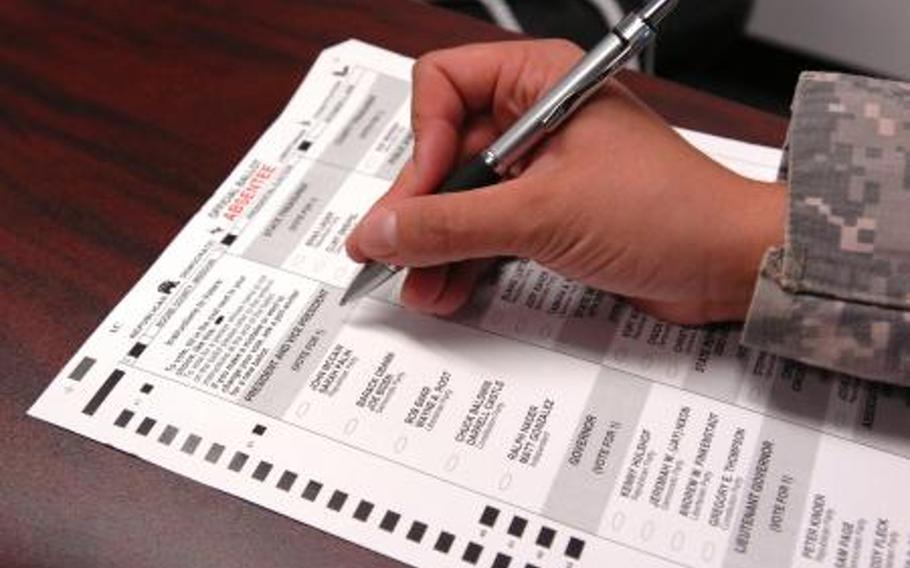 A voter based at U.S. Naval Station Guantanamo Bay, Cuba, fills out an absentee form in 2008. The U.S. Justice Department is suing Michigan for failing to send ballots to overseas voters in time for the state’s Aug. 7 federal primary. (Carlynn Knaak/DVIDS)

YOKOSUKA NAVAL BASE, Japan &ndash; The U.S. Justice Department is suing Michigan for failing to send ballots to overseas voters in time for the state&rsquo;s Aug. 7 federal primary.

It was the third state the federal government has sued this year on similar grounds, and the fifth time it has taken action against Michigan since 1988.

The latest lawsuit claims Michigan has violated federal law and urges the state to &ldquo;ensure that the State&rsquo;s [Uniformed and Overseas Citizens Absentee Voting Act] voters have sufficient opportunity to vote&rdquo; next week.

The suit also claims Michigan violated the MOVE Act, a 2009 law which requires states to mail or transmit ballots within 45 days of a federal election.

&ldquo;Michigan has failed to provide any information on whether 443 jurisdictions have transmitted ballots to (overseas) voters in compliance with the 45-day deadline,&rdquo; the lawsuit states.

Another 62 cities and townships reported they missed the 45-day deadline, meaning about one-third of all Michigan municipalities did not meet federal standards.

The suit also claims the state reported it had sent out ballots for a Sept. 5 special primary election one day later than required by law. That election will select party candidates to fill the 11th Congressional District seat vacated by Republican Thad McCotter, who resigned after signatures for his 2012 nominating petition were found invalid.

The Justice Department is asking the court to require Michigan to file reports regarding &ldquo;transmission, receipt and counting&rdquo; of all overseas ballots through the Nov. 6 general election. Michigan law allows its secretary of state to determine whether ballots can be transmitted by fax, email or other electronic means.

A study released last week by the Verified Voting Foundation and other groups found that states using electronic methods to expedite voting have made their systems vulnerable to hacking.

Last week, the Justice Department filed suit against Georgia because its election calendar did not allow enough time for potential runoff ballots to be sent overseas within the 45-day window. In February, the federal government sued Alabama for not sending ballots on time.

Overseas voters can use express mail to return their marked ballots for free, in accordance with the MOVE Act.