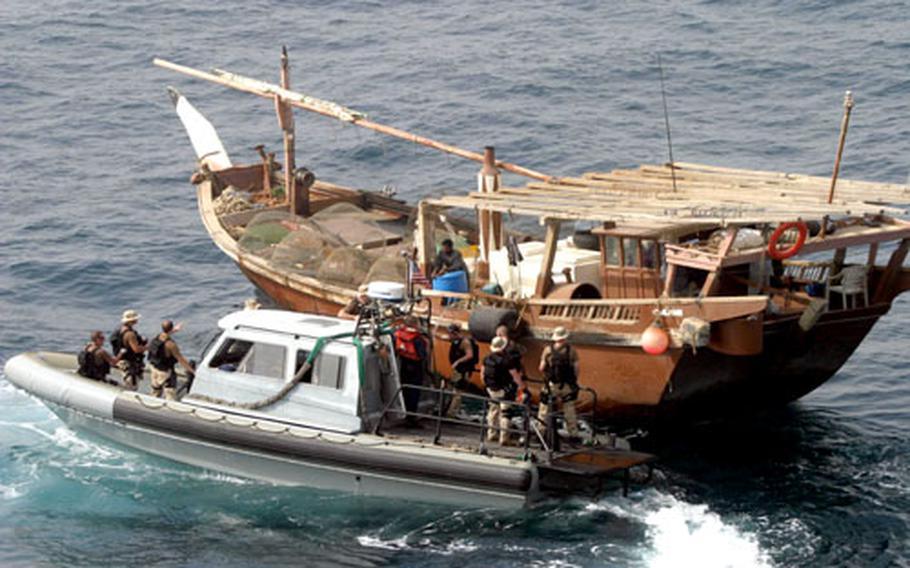 A team from the USS Gunston Hall comes alongside a dhow fishing boat in the Persian Gulf last September. The U.S. Navy is trying to win the hearts and minds of fishermen in the gulf to try to deter piracy and terrorism, commanders say. (Courtesy of U.S. Navy)

ABOARD THE USS KEARSARGE &#8212; It is around 7 p.m. and already pitch black in the middle of the Persian Gulf.

On the port side, sailors suddenly notice a flickering searchlight. Thinking it is a distress call from a small fishing boat, this amphibious assault ship launches two boarding teams to see if they can help.

The incident last week turned out to be a false alarm, but sailors said the fishermen thanked them for their concern and quick response.

While international law requires military and civilian mariners to assist other ships in distress, the Navy is eager to help and make friends with those who make a living in the gulf. The Navy along with the U.S. Coast Guard and allies are trying their best to win the hearts and minds of fishermen with the aim of deterring piracy and gaining information on possible terrorist activity.

The nearly 3,000 sailors and Marines aboard this amphibious assault ship haven&#8217;t captured any &#8220;bad guys&#8221; on this deployment, but ship commanders in the Kearsarge Strike Group say they are helping police the gulf, which the Navy calls &#8220;maritime security&#8221; operations. Piracy has been a concern in these waters for centuries.

The approach fits in with the Navy&#8217;s new strategy, which calls for more humanitarian missions, improving international cooperation and focusing on maritime security.

Leaders of the Navy, Marine Corps and Coast Guard released a strategy document, &#8220;A Cooperative Strategy for 21st Century Seapower,&#8221; at the International Seapower Symposium in Newport, R.I., on Oct. 17.

The Navy, in conjunction with the Coast Guard and other nations, often visit ships with little or no reason other than to introduce themselves and make a good impression upon the fishermen and merchant mariners.

A coalition of countries working in the gulf call such missions &#8220;interactive patrols,&#8221; or IPATS for short. It could be compared to a city cop walking the beat and visiting residents to let them know he or she is there to protect them and they could call when needed.

The kinder, gentler tactic is a shift from the Navy&#8217;s previously more aggressive approach. On past deployments, boarding teams often came aboard fishing boats, called dhows, and merchant marine ships, no questions asked. They rifled through the crewmembers&#8217; things and took digital fingerprints and photographs of everyone aboard.

The problem is that didn&#8217;t do much to build relations with law-abiding fisherman just trying to make a living.

Now the Navy is more selective. Sailors get on a ship only if they have evidence of illegal activity, they notice something suspicious, or if the crewmembers ask them to.

The boarding team aboard the dock landing ship USS Gunston Hall has approached more than 150 ships in its first three months in the gulf but boarded only a handful of vessels.

In most cases, the boarding teams will float up to the fishing boat and ask them if they have any information on possible pirates or terrorists. The sailors often offer the fishermen water or food. Some teams have offered the crews work gloves.

If a fishing boat is having engine trouble, Navy ships will send over mechanics to help fix the problem. Navy welders have helped fabricate small parts.

Fishermen have sometimes returned the kindness, offering some of their catch to the teams as a gift, Brown said. While the exchanges are nice, the Navy and Coast Guard are hoping the fishermen also will offer up more than fish. Sailors are trolling for information on piracy and terrorist activity.

Ensign Eric Handal acknowledges the new approach is making a difference in terms of maritime security, but he longs for the opportunity to again jump aboard a boat packed with &#8220;bad guys.&#8221;

Boarding teams go through considerable training to learn how to deal with what they call &#8220;compliant&#8221; and &#8220;non-compliant&#8221; boardings. They train for the worst because they don&#8217;t know necessarily who is aboard a small ship and whether they are good or bad.

Team members come from a cross section of jobs on a ship, from electronic technicians to fire controlmen. Many sailors who do it said it&#8217;s the best job in the Navy and would prefer to do it over their primary jobs.

So far, no pirates or terrorists have been caught, but commanders insist the gulf is safer by their presence and the visits. Sailors say fishermen often stay near their warships because then the pirates won&#8217;t bother them.