Just one more day in the paddies 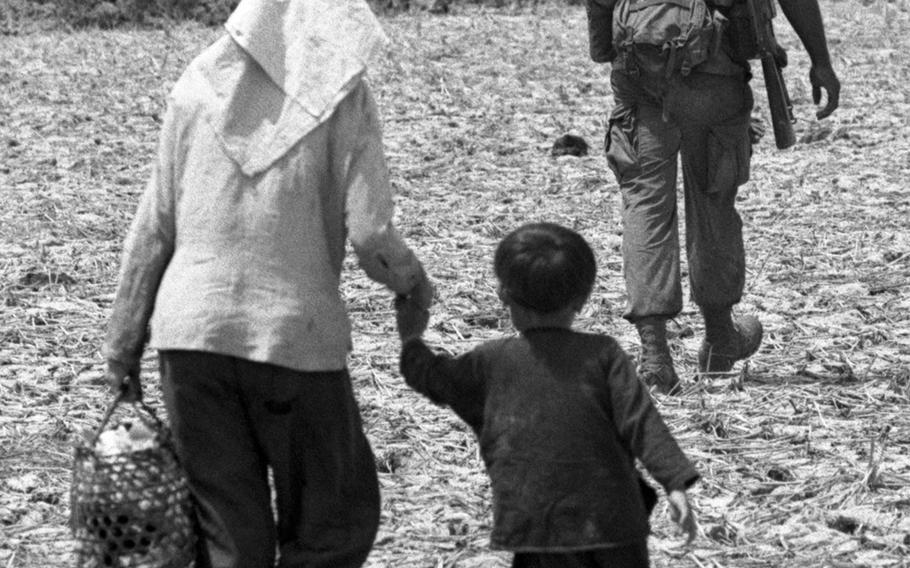 Buy Photo
In the area of Can Giouc, South Vietnam, in April, 1967. (Allen Fasoldt/Stars and Stripes)

Buy Photo
In the area of Can Giouc, South Vietnam, in April, 1967. (Allen Fasoldt/Stars and Stripes) 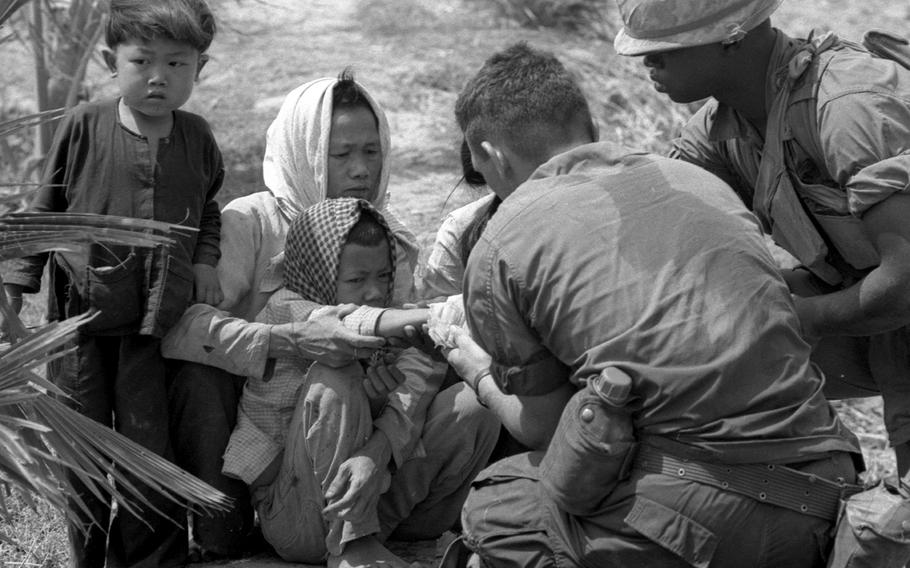 Buy Photo
A boy whose hand was accidentally shattered by an M-16 round is examined by a medic. (Allen Fasoldt/Stars and Stripes) 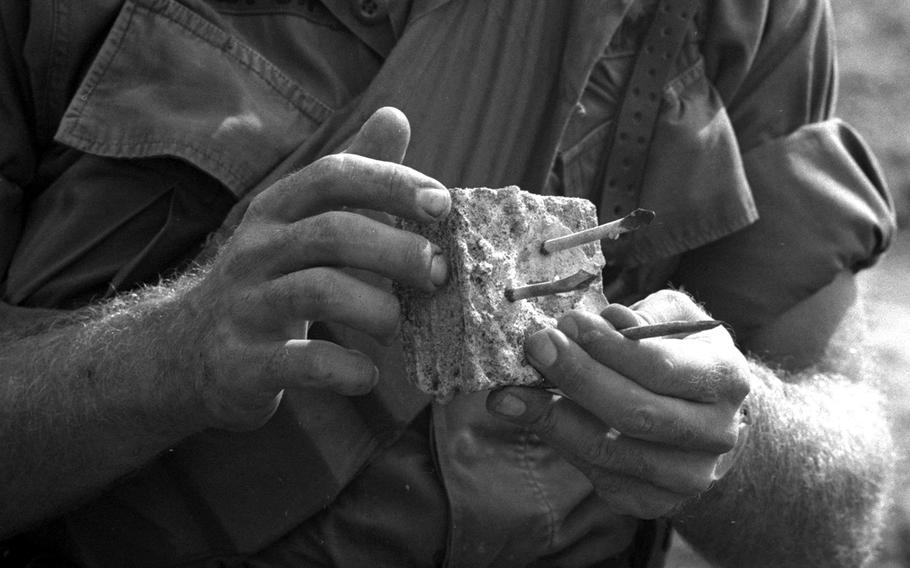 Buy Photo
A wounded American soldier is helped to a helicopter by Vietnamese and U.S. troopers. (Allen Fasoldt/Stars and Stripes) Buy Photo
Soldiers open fire on a pair of Viet Cong on the run about 700 yards away. (Allen Fasoldt/Stars and Stripes) Buy Photo
A C Co. squad is silhouetted against the sun during a patrol along a dike in a rice paddy near the Nha Be River as part of a new delta sweep. (Allen Fasoldt/Stars and Stripes) 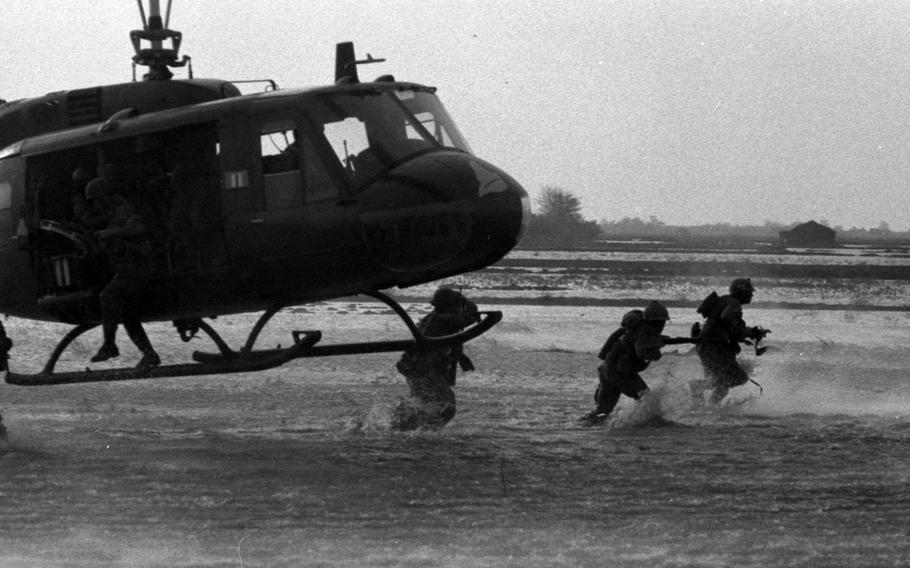 Buy Photo
Soldiers from 199th Light Infantry Brigade splash through a rice paddy about 15 miles south of Saigon after being dropped off by a Robin Hood chopper from the 173 Assault Helicopter Co. (Allen Fasoldt/Stars and Stripes)

CAN GIOUC, Vietnam — The bullets echo overhead and you slide into the mud at the edge of the paddy, hugging the dike.

"Snipers!" the captain yells, and his men fire into a wall of palms. As quickly as it started. the firing stops. You move on.

The first sergeant talks about it the night before, spreading out a map.

"We were in there before. They had rice in some of those hootches. So we're going back."

At breakfast the CO comes over. "Coffee, sir?" the KP asks.

"1 need it today," Capt. Dexter Branscome says. He just took over C Co. after working in the battalion S-1 section.

The leaders of C Co. talk over a few last matters — the tide ("lt should be out when we go in") and the slicks, the assault helicopters.

"Ten slicks at Oh-Seven-Thirty." Branscome tells the others. "Robin Hoods."

Robin Hoods are choppers of the 173 Assault Helicopter Co., based at Lai Khe.

The helicopters will pick up Charlie Company on a straight stretch of dirt road between two rice paddies, a few hundred yards beyond the company's base camp.

The men will go into battle only 15 miles south of Saigon, just a few minutes by air away front the big city.

The Robin Hoods slide onto the road, tilted backward, kicking up gritty dust that grinds into your eyes. The men slip farther back into the paddy to keep away from the tail rotors and clamp their hands to their faces to block some of the dust.

All you can see is the chopper's skid, and when the skid touches the road, you run.

The choppers fly north in single file at 3,500 feet then veer sharply and head due south. They never fly straight to an LZ; that would give the Viet Cong too much of a warning.

But a mile ahead, Huey gunships are firing rockets into the landing zone. The VC know by now where Charlie Company is going.

The chopper hovers three feet off the water. Branscome and his radioman are out there already. You jump. The mud sucks up around your legs, beyond your knees. Your pack pulls you off-balance and it seems impossible to stand.

The 21 men from the first three choppers have waded 20 yards toward a line of nepa palm and they're shooting into the leaves. Recon by fire. Others to the left open up on the same target. Nobody knows what's in there. Maybe nothing.

The Robin Hoods return with the other half of Charlie Company. They follow 200 yards behind. The paddies are the size of football fields, with a foot-wide dike between each square. It takes 15 minutes to cross each one.

A hundred yards ahead, the lead squad searches four straw hills. A rifleman points the barrel of his M-16 into a hay pile while another peers into an old clay pot. The huts are deserted.

The second half of the company follows like the backfield on a football team.

A bicycle path leads west from the village. "Movement up there." a sergeant says. "One wearing a black shirt and white pants and another one in brown, up the road."

A lieutenant is on the radio: "Request permission to fire." A machine gunner lays his M-60 in the middle of the path. "OK, they said go ahead," the lieutenant says, and the bullets chatter up the path.

The figures turn left around a bend and disappear.

The lieutenant's voice cuts over the machine gun. "Second squad, get out there and see if you can find them. No more than.300 yards out, do you hear me?".

Eleven forty-six. It's starting to get hot now, and you take your first drink of water. Two swallows.

The village seems peaceful now. One of the men has put down his rifle and is counting to ten with a little Vietnamese girl. "Mot," she says. "mot, hai, ba. .'

Firing behind the company. Just a few rounds. maybe half a mile away. Then grenades.

"Get that squad back in." the lieutenant yells.

The girl stops counting at six. A grenadier breaks open his M-79, pulls out the round, wipes it on his shirt and puts it back in.

The firing increases into a steady metallic crash. It seems closer.

The lieutenant looks down the path. "Let's go!" he shouts, and the two platoons race down the path toward the next village.

A few rounds pass overhead and you jump into a paddy, using the dike as a shield. You press against the dike.

Nobody fires back — you can't see where the bullets are coming from, except that they're hitting farther away now.

The other half of Charlie Company is up there, beyond the palms, where the racket is coming from.

Two gunships swing around from the left and make a nose-down run over the village. The Hueys bank and then open up. Their machine guns sputter and a black puff trails the chopper. Rockets. You hear the sound a few seconds later and the ground shakes.

Two more gunships join the others. After an hour, the Hueys leave to reload and a FAC plane dives and fires two rockets.

A platoon moves into the village, but the Viet Cong — a couple of snipers — are gone. One of them dropped his pack when he hurried away.

Two twenty-seven. A medic hears someone crying and finds a Vietnamese boy sitting on a dike, holding out a blood-drenched hand. His hand was shattered accidentally by a round from an M-16.

The medic gives him a shot of morphine and bandages his hand, then calls for a helicopter.

Into the paddies again. A squad picks up four suspects — an old man, two young men and a woman, who is married to one of the men. Her husband, the interpreters say, is a known VC. A chopper lands to take them away to Nha Be.

Five thirty-five. The day's objective, a river, is only a half-mile away. The sun is cooler and the men take a break, sharing what's left of their water. Supply choppers will meet them at the river.