Just back from deployment, Sasebo troops get first glimpse of newborns 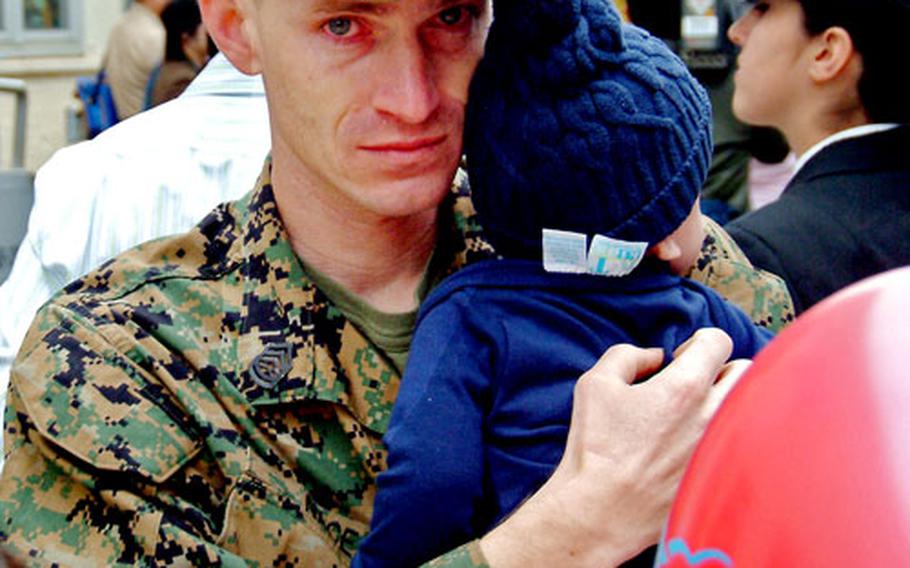 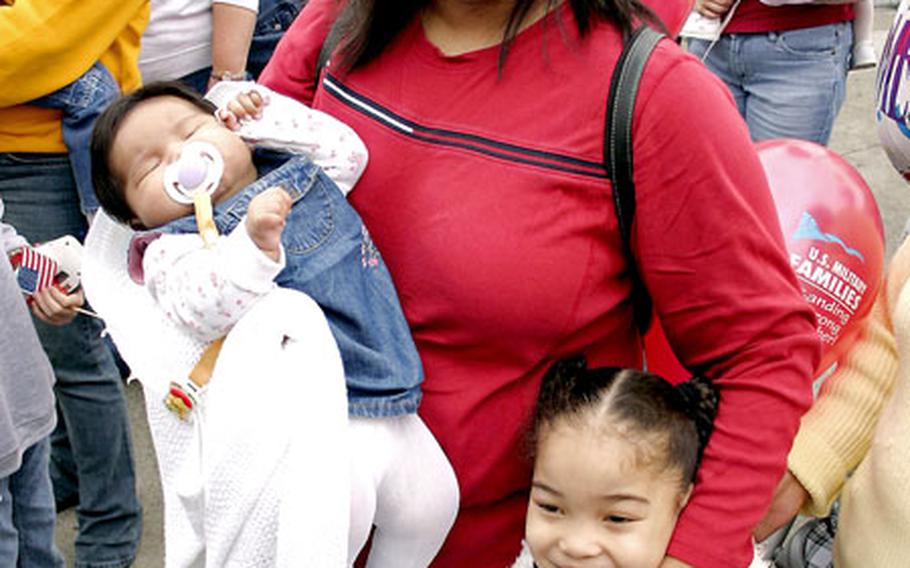 Navy spouse Evelyn Raymond holds her infant Ashley while waiting on the India Basin pier for her husband to disembark the USS Essex on Wednesday. (Greg Tyler / S&S)

After he was deployed a little more than two months, his wife Jennifer delivered the couple&#8217;s first child, son Robert Joseph Nace, who goes by R.J.

Nace recalls that he would like to have been involved, or at least in the general vicinity. As a Marine, however, orders are orders.

&#8220;When I stepped off the ship Wednesday and I saw them both on the pier, I went straight to them, and I grabbed them both and hugged them,&#8221; Nace said of the greeting.

The real meeting, nevertheless, remained an overwhelming occasion, and a couple of days later, father and son have been hanging out and getting acquainted at their Hario Housing Village home. &#8220;Hey, we&#8217;re getting along great,&#8221; Nace quipped.

Parents meeting infants for the first time, or even reuniting with toddlers after a long deployment, are predominantly feeling good. Even so, a couple of factors should be kept in mind, said an official with Sasebo&#8217;s Fleet and Family Support Center.

&#8220;The hardest part is just sort of not knowing what to do with them,&#8221; said FFSC&#8217;s New Parent Support Nurse Ladonna Kolman. &#8220;Even older, but still-small children make tremendous amounts of progress in eight months.

&#8220;Dads and moms deployed for long periods need to be aware that they might not be immediately attuned to their child&#8217;s level of development,&#8221; Kolman added Friday.

Evelyn Raymond, daughter Alexiss and approximately 2-month-old Ashley waited anxiously Wednesday for Petty Officer 2nd Class Donald Raymond, a machinist&#8217;s mate, to disembarked the Essex. Once on the pier, Raymond made a beeline toward the three.

Ashley was born while the Essex was still in the North Persian Gulf, before it diverted to assist the victims of tsunamis in Indonesia.

The proud petty officer, had he been in Sasebo, would&#8217;ve been totally involved in the pregnancy and made sure he was there during Ashley&#8217;s birth, he said.