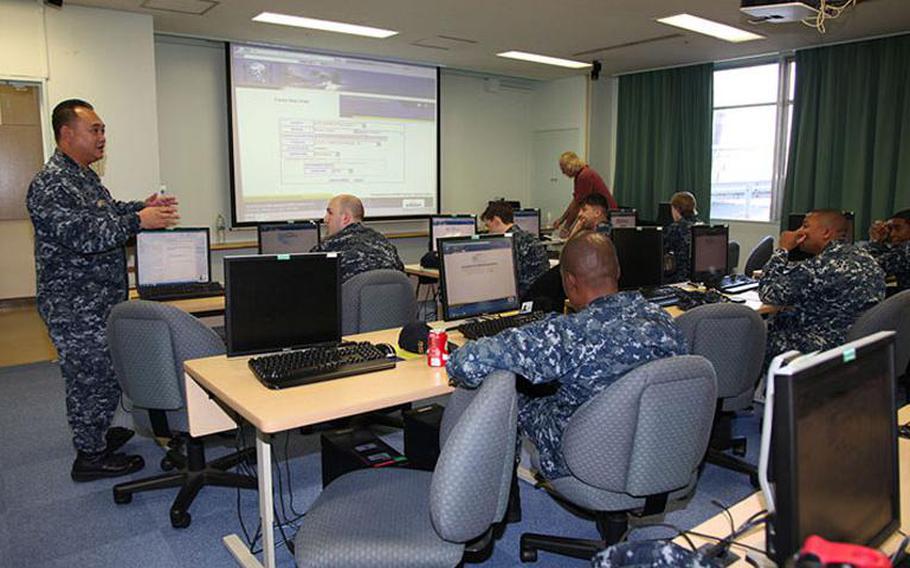 Khoi Pham (far left), then a U.S. Navy Senior Chief Petty Officer speaks with sailors during a food service training session at Yokosuka Naval Base in October 2015. Pham was sentenced to 179 days in the brig and reduction in rank after a military jury on Friday ruled that he sexually assaulted a woman in an off-base residence last year. (U.S. Navy photo)

YOKOSUKA NAVAL BASE, Japan — A senior chief petty officer was sentenced to 179 days in the brig after a military jury convicted him Friday of sexually assaulting a woman in an off-base residence.

The victim is a proprietor in an area known as the Honch, a collection of bars and clubs across the street from Yokosuka Naval Base.

Pham and the victim had been drinking that night when they saw each other in The Honch, and Pham walked the woman to her nearby home, Bilecki said.

Navy prosecutors argued during the trial last week that Pham, who is married, had sexual intercourse with the woman while she was too drunk to consent, according to Bilecki.

The defense argued that the accuser had only three or four beers and consented to sex acts, but that intercourse never took place.

The government submitted physical evidence that found Pham’s sperm on a vaginal swab. However, Bilecki disputed U.S. Naval Hospital Yokosuka’s handling of the DNA evidence, arguing that the hospital used broken equipment that could have resulted in contaminated swabs.

Bilecki said the defense was surprised by the verdict, and that it intends to appeal.

“We don’t believe the evidence showed that [she] was too intoxicated to provide consent,” Bilecki said.

Navy officials stood by the verdict on Monday.

“A jury of military members heard the arguments, saw the evidence and found him guilty of the charges,” Naval Forces Japan spokesman Cmdr. Ron Flanders said.

A dishonorable discharge is now an automatic consequence of a conviction under Article 120, which guides Uniform Code of Military Justice procedures for rape and other sex crimes, Bilecki added.

As part of the discharge, Pham would be reduced in grade to E-1 after serving his sentence if further appeals fail.