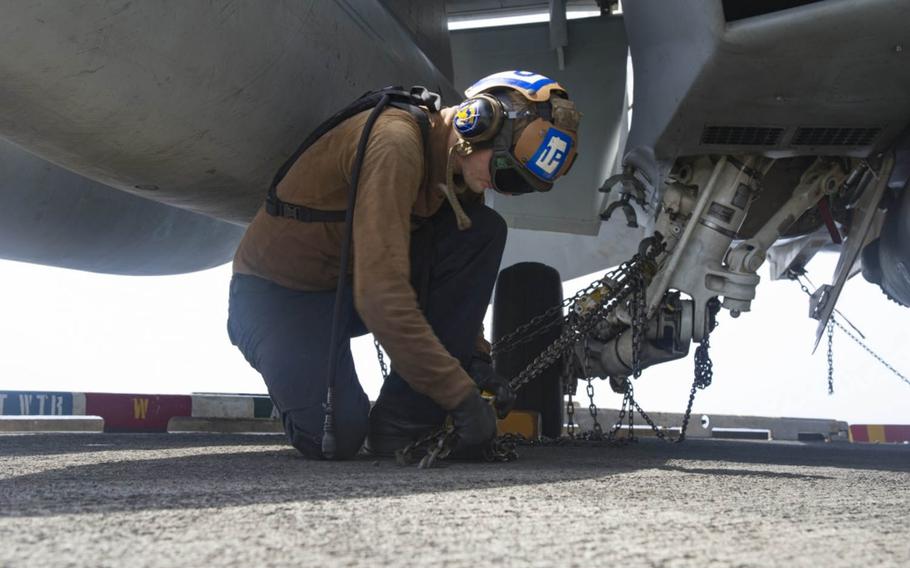 ABOARD THE USS DWIGHT D. EISENHOWER — There is a maxim about the military: make rank and gain responsibility.

Many of the larger responsibilities are given to those with the knowledge and experience that comes from time in and rising through the ranks.

Not true for all. Plane captains are among the most junior enlisted servicemembers, yet, they are responsible for multimillion dollar naval aircraft and the lives of the pilots who fly them.

“If we aren’t doing everything right, we are essentially putting the pilots life in our hands. It could become very dangerous,” said Petty Officer 3rd Class Desiree Moon, a plane captain with Strike Fighter Squadron 131 deployed in the Middle East with the Eisenhower Strike Group. “So we’ve got to make sure everything is good.”

The plane captain’s pre-flight checks are one of the final steps before a naval aircraft takes off.

They check everything from the tires to the cockpits. They look for any foreign object that could cause damage, cracks, missing fasteners; they ensure the antennas are intact and that everything the aircraft needs to be mission-ready is in place. Plane captains are also responsible for the cleanliness of the aircraft, especially the canopy.

These checks are done several times a day, including after an aircraft returns from its mission.

“For every five minutes we spend checking the jet, they spend an hour,” said Strike Fighter Squadron 131 F/A-18C Hornet pilot Lt. Matt, who couldn’t be identified by his full name for security reasons. “A lot of confidence we have flying those jets is from the plane captains.”

The plane captains’ role in preventative maintenance also helps keep the strike fighter squadron’s jets out of the hangar bay, said Matt. That allows the pilots to continue supporting the air campaign against the Islamic State in Iraq and Syria.