Vehicles of the1st Armored Brigade Combat Team, 1st Cavalry Division arrive at a railhead in Zagan, Poland, June 4, 2018. The vehicles were received at port in Antwerp, Belgium, and transported by train to Zagan in support of Operation Atlantic Resolve. (Hannah Tarkelly/U.S. Army)

Vehicles of the1st Armored Brigade Combat Team, 1st Cavalry Division arrive at a railhead in Zagan, Poland, June 4, 2018. The vehicles were received at port in Antwerp, Belgium, and transported by train to Zagan in support of Operation Atlantic Resolve. (Hannah Tarkelly/U.S. Army) 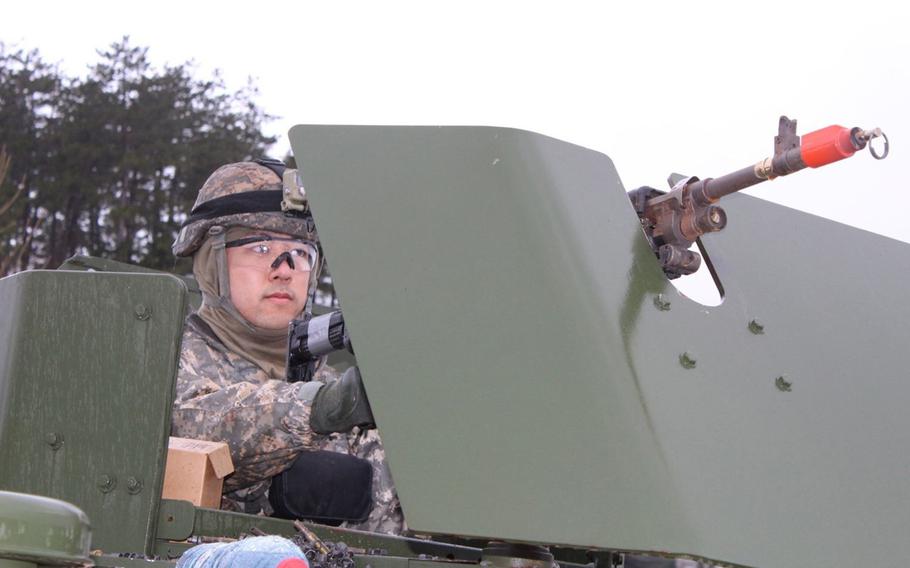 BAUMHOLDER, Germany — The 16th Sustainment Brigade is giving junior enlisted soldiers responsibilities they wouldn’t get without pinning on a lot more rank elsewhere, as the growing scope of missions in Europe stretches the brigade's personnel resources.

The brigade is the lead support unit for Europe under the 21st Theater Sustainment Command. With roughly 3,200 soldiers, the brigade’s subordinate units cover 35 countries, an area about a third larger than the continental United States.

Because of their geographical reach in comparison to stateside units, they do the amount of work normally tasked to three sustainment brigades, brigade commander Col. Michelle Donahue said.

There are risks involved in allowing inexperienced soldiers to manage such tasks as loading tanks onto trains, but they’re more often outweighed by the gains in morale, confidence and personal growth, brigade officials said.

“Within the sustainment brigade, we have to rely on our junior leaders simply because we don’t have the number of experienced leaders to actually go out there and perform missions,” said Command Sgt. Maj. Frank Graham during a sustainment mission in Antwerp, Belgium, in May. “In no other sustainment brigade are soldiers getting the opportunities that they do within the 16th Sustainment Brigade — actually getting hands-on (experience), getting out there in the yard doing their jobs.”

Senior military commanders in Europe have repeatedly said they need more logistical forces and capabilities. Congress also has called on the military to review its force structure in Europe to determine whether it is sufficiently resourced.

The 2019 defense budget calls for $653 million in spending on the European Deterrence Initiative, a 37 percent increase over this year. But what extra funding will go to sustainment if the budget passes relatively intact remains unclear.

In the meantime, the 16th Sustainment Brigade will continue supporting a variety of units and missions. Besides regular supply and trucking units, the brigade can deliver fuel and water, run remote administrative sections, deliver mail, dispose of expended or abandoned munitions, perform maintenance and set up communications.

Last year, the brigade supported 53 exercises, Donahue said, adding that there are fewer exercises this year, but bigger and longer ones. This summer, the brigade will support 20,000 U.S. and allied soldiers.

In May, the sustainment brigade was the main unit that moved equipment for the 1st Armored Brigade Combat Team, 1st Cavalry Division, from a port facility in Belgium to Poland for Saber Strike 2018. They also assisted the combat brigade’s nine-month rotation as part of Operation Atlantic Resolve, a NATO mission to deter Russia that began after Moscow’s annexation of the Crimean Peninsula in 2014.

In a staging yard inside the port of Antwerp, junior enlisted soldiers from the brigade directed rail car loading for the NATO mission.

Cpl. Braian Ortiz, a transport movement coordinator with the 624th Movement Control Team, was one of those in the yard accounting for the cars. He made sure all the cargo was loaded in the proper order. Normally a staff sergeant would be doing that job, said Sgt. 1st Class Andrew Korbel, Ortiz’s supervisor.

Ortiz said the experience was challenging but boosted his morale.

“It feels good to be chosen; it’s like somebody trusts you,” he said. “It inspires you to work harder.”

When Ortiz arrived at the unit, he was a private first class. Now two years later, he is about to earn his sergeant’s stripes. While at the movement control team, a subordinate unit of the brigade, he cross-trained and became the detachment’s supply sergeant, a job normally given to a staff sergeant.

Ortiz, whose native language is Spanish, stayed after work almost daily, reading through the Army’s English-language manuals to learn his secondary job. The supply job led to his promotion, he said.

“I got known among a lot of units and was able to go to extra classes and different boards,” he said.

Ortiz conceded that sometimes trusting soldiers with extra responsibility can be a mistake.

“It really depends on the person, if they are willing to put forth the effort to succeed,” he said. “It was a big chance, but the leadership has taught me thoroughly.”

Having junior enlisted and noncommissioned officers take on so much responsibility is risky for leaders, too. But they say the payoffs are worth it.

“If you strive to unleash talent by shifting the mindset from control to growth, the risk is worth underwriting each and every day,” Donahue said. “Sending our junior leaders out on their own to operate and lead sustainment missions empowers them to grow.”