USS Denver sailors watch as the USS Juneau pulls into Sasebo Naval Base, Japan, on Thursday. The revitalized Denver will replace the Juneau next month. (Travis J. Tritten / S&S)

USS Denver sailors watch as the USS Juneau pulls into Sasebo Naval Base, Japan, on Thursday. The revitalized Denver will replace the Juneau next month. (Travis J. Tritten / S&S) 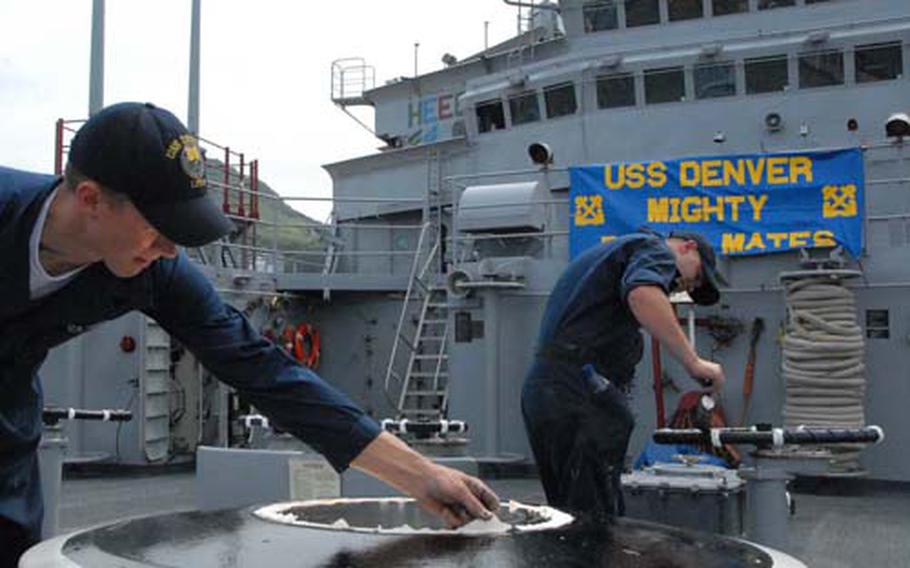 Seaman Kenneth Haley, left, and Petty Officer 3rd Class Derek Hagood paint the USS Denver at Sasebo Naval Base, Japan, on Thursday. The revitalized ship will replace the USS Juneau at Sasebo. Most of the Denver crew will return to California with Juneau. (Travis J. Tritten / S&S) SASEBO NAVAL BASE, Japan &#8212; The USS Juneau was looking a little tired as she faced retirement this week.

The 43-year-old Austin-class amphibious assault dock pulled into Sasebo harbor for the last time Thursday, her sides streaked with rust, as the crew of the newly painted and upgraded USS Denver looked on.

The Denver was fresh from revitalization work in San Diego and will replace the forward-deployed Juneau and her dated equipment, the U.S. Navy said.

The Juneau will be mothballed after making the trip back across the Pacific but the "hull swap" will keep her crew of about 435 sailors and their families in Sasebo with the Denver.

In 1999, the "Mighty J" was part of the first-ever hull swap, which occurred at Sasebo, and now the ship will be replaced under that program, said Lt. Denver Applehans, spokesman for Expeditionary Strike Group 7, which includes Juneau.

"The people are already here with their families and are settled, and it makes more sense to just switch the ships," he said.

The swap has been in the works for 2 1/2 years because switching two ships with very different uses takes a lot of planning, said Michael DeSanctis, port engineer for the Juneau and Denver.

DeSanctis said the Denver was a "cattle car" that transported servicemembers and equipment for short periods around the West Coast. Juneau loaded up with Marines and equipment and went on patrol for months at a time, he said.

"You take a Subaru station wagon back in the States that the wife uses to take the two kids with car seats to the supermarket," DeSanctis said. "[Then] you take it out to the farm and fill it with hay. It&#8217;s a different vehicle with different purposes."

The two ships will stay stern to stern in the Sasebo port for about three weeks while new equipment and data is transferred and the crews get accustomed to new equipment, he said. A small group of sailors that came with the Denver will stay as part of the crew, he said. The rest will ride the Juneau back to the States.

The Denver underwent revitalization in 2005, and the swap will leave Sasebo sailors with a more modern ship, DeSanctis said.

The Juneau prowled the waters off Southeast Asia during Vietnam, managed cleanup of the Exxon Valdez oil spill and participated in Operation Desert Storm in 1990, according to the Navy.She will depart Sasebo in mid-July and head back to California, and the Denver will be ready for fall patrol, said Capt. Francis X. Martin, the commanding officer of Sasebo Naval Base.

Meanwhile, the base will host about 350 sailors from the Denver, Martin said. "We&#8217;re getting them on [Morale, Welfare and Recreation] trips now, and we are getting them out experiencing Japan."

The USS Juneau was the first Navy ship to participate in a hull swap in 1999 and now will be traded out for the USS Denver. Here are all the hull swaps that have occurred at Sasebo Naval Base: